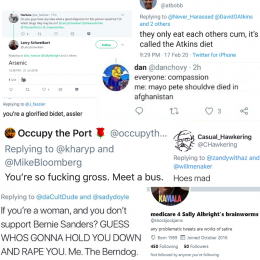 Among the tedious mainstream talking points of the past few years has been the tone of political discourse in this country. This began with the candidacy of Donald Trump, during which his supporters unleashed hell on his opponents on social media. It continues now with Bernie Sanders supporters who, with similar passion — albeit one constrained by a liberal social orthodoxy which prevents them from reaching the scorched-earth pitch of the former’s early supporters — call out their opponents in ways new to the still-prissy “I can’t even” world of Democrats. But many liberals are sick of all the tension and are looking for it to stop. They don’t understand the hostility, the aggression, and the loud debates. They didn’t understand it when it came from the Trump camp, and to see such behavior in their own rarified playpen is simply too much. They just cannot handle any more “mean Tweets.”

The elites are, of course, eager to encourage such feelings. It is, in part, why Democrats are seriously considering such pathetic dullards and assembly line creations as Amy Klobuchar and Pete Buttigieg to run this country — or worse, seriously willing to consider signing on the dotted line their approval of a billionaire megalomaniac Jew who is trying to purchase the presidency in order to — well, we can make an educated guess. Each of these politicians represents stability and a return to normalcy to these people in their own way. They’re a way to brush all this chaos aside, go back to consuming and ignoring the real world, and living lives of platitudes and pretense. Each will ensure that the slow boil can continue unabated, that the great decline will remain profitable for its shareholders.

It is natural to want stability and comfort. No one can be faulted for these desires. However, when these desires come at the expense of one’s community and are based upon decades of ignorance and an unwillingness to accept new information or handle change then there is a problem. As many others have said: If mean Tweets bother a particular candidate or his supporters, that candidate is probably not fit to be president. Usually, this is said because it suggests an inability of the candidate to handle Trump supporters, but the vast majority of them are nowhere near as intense as they used to be anyway and are unlikely to be a problem.

What this actually indicates is a cluelessness about the gravity of the American political situation. The fissures in this country run deep and are in the process of turning into canyons. This is felt by many on the real Right and the real Left, articulated in different ways and for different reasons, but expressed similarly: Through passion, anger, urgency, vitality. We are all sick of being lied to, lied about, cheated, and mocked when we are not being ignored. We are sick of being pawns in a game we don’t want to play. Any candidate who mouths neoliberal talking points and complains to the coalition of human resources departments that news outlets have become about the unkind words his fellow citizens use in a time of sociopolitical turmoil and momentous global change is either a fool or a repugnant beneficiary of that very turmoil.

The tone of American politics only reflects the mood of the country. And this is almost certainly as nice as we will ever be again. Anyone having trouble now better make alternate plans. With expanding enclaves of racial competitors, terrible income inequality, radicalization on both sides of the political spectrum, and vastly different cultural values among large segments of the population, America is united by almost nothing but a few shared pop culture references and the same chain stores and fast-food restaurants.

The elites have told us for years that diversity is our greatest strength, and then when actual diversity happens — when, for example, blacks can’t be convinced to care about a robotic homosexual nerd; or when mestizos mock attempts by white liberals to pander to them with their first-year Spanish skills; or when Muslims start speaking a bit too freely about Jewish power in Washington — all of a sudden, the tone police step in to try to put a lid on those who are reacting to the supposedly unifying disunity created and beloved by our betters. When a politician sees an invasive weed, he never pulls it out by the root. He covers it with a tacky Chinese-made garden gnome and then fires the gardener who pointed it out.

A country with an eternal order of interchangeable, deracinated, broadly capitalist consumers with no discernible foreign policy other than “pro-Israel” was, is, and always will be a fantasy. It was a twisted and deliberate invention, an intersection of lies and misunderstandings, malevolence and big hearts, desert trickery and common decency. It can never work, because unfortunately for Jews, capitalists, and the collaborator class, the characters are real human beings and will inevitably go off-script. We are flesh and blood, with histories, agency, and an awakening sense that the future is unwritten. And some of us — ever-increasing numbers of us — have the dignity and integrity to push back.

This pushback will not — indeed, cannot — be friendly. Every mean Tweet will be layered with years of anger, sent to one person, but directed emotionally at hordes of rats and do-nothing frauds. These people had been warned for decades that their plans were disastrous but instead chose to be polite liberals, to appear to be better than everyone else, to think the proper things and scoff at the rabble, to not offend Jews or risk alienating themselves from Jewish cash, and to secure big houses and private schools for their precious families while their communities collapsed. Each was willing to see fellow Americans slaughtered, impoverished, abused, and spiritually wrecked in order to keep desperately patching the bizarre fictions of the 20th-century social landscape. Their world is one of death and disorder, and they don’t care. And yet they have the nerve to complain about mean Bernie Sanders supporters and others who are making their various attempts to obtain power for their particular group of business contacts and interest groups slightly less convenient.

At the time of this writing, they are now accusing Sanders of being supported by Russia, too, just as many had predicted. This is all a game to them. We are a joke to them. Our concerns, our lives, mean nothing to any of them. That these vile creatures can unabashedly, with straight faces, complain to us, the electorate, about our anger, bitterness, and cynicism instead of groveling and apologizing for their crimes on debate stages and in ads — let alone courtrooms — is indicative of how much work has to be done.

But let that thought energize instead of depress us.

That more and more people are furious and unwilling to take seriously the establishment of either party is indicative of an acceleration of our politics; a move towards a more open space of critique in which the legitimacy of the elites is highly vulnerable; and no amount of money can buy it back.