Jim Goad’s The Bomb Inside My Brain 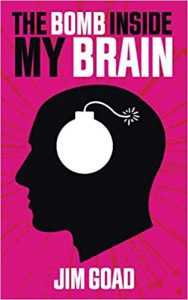 One thing White Nationalists need to change the cultural and political mainstream are people who are not White Nationalists but who nevertheless publicly support some of our claims and stand up for the legitimacy of our concerns, our right to speak our minds, and our right to participate in the political process. For close to a decade now, Jim Goad, from his platform at Taki’s Magazine, has been the most talented and eminent writer playing this role. He is one of our movement’s most valuable players precisely because he is not on our team, or any team for that matter.

I have always regarded Goad as a great writer, but I also thought his desire for “A World without Politics” or political commitments to be insincere. I was just wrong about that. Basically, I had mistaken him for a neo-folk scene poseur. (You know the type.)

Jim Goad’s latest collection of essays, The Bomb Inside My Brain, is now my favorite of his books and one of my favorite books of 2019. This is not a collection of political commentary like The New Church Ladies or Whiteness: The Original Sin, which I also highly recommend. Instead, these essays are largely autobiographical. But they are not merely about Goad’s personal experiences, for he seeks to draw larger lessons from them, especially moral ones.

The book is dedicated to Bucky and Zane. Bucky was Jim’s eldest brother, who bore a life of immense suffering and loneliness with grace and good-heartedness until he was brutally murdered at the age of 25. Zane is Jim’s son, born in 2008. The bomb in the title was the brain tumor that almost killed Jim a month before his son was born.

Having a child and nearly dying within the space of a month are the kinds of events that make people think about the brevity of life and its meaning. They make you take whatever time you have left much more seriously. They make you want to cut the fat and frivolity out of your life.

But in Jim Goad’s case, taking life more seriously does not take the fun out of his writing. It simply injects an added dimension of feeling and significance. These essays will make you laugh, break your heart, and convince you to change your life all in the space of a single page. I’ve never written anything as self-revelatory or emotionally powerful as Jim Goad—and I probably never will.

The book falls roughly into four parts. The first fifteen essays basically summarize the wisdom Goad has drawn from his life thus far. The highlights are “Ode to Bucky Goad,” about his late brother; “The Bomb Inside My Brain” and “Why You’re Dead to Me,” about his tumor and what he learned from his brush with death (the latter is required reading for all extremely online people); “Combat Training for Toddlers” and “10 Commandments for My Son,” which contain advice we should all heed; and finally “Love Among the Damaged,” which is so brutal that words fail me.

The next thirteen essays, beginning with “Teenage Jesus Freak,” talk about the wrong paths that Goad took: Catholicism and drugs, both legal and illegal. Today’s faux and TRVE Catholic groypers need to read “Teenage Jesus Freak” and “Why I am Agnostic.”

After that we have four essays on one of the most endearing characteristics of misanthropes: our love of animals.

The last ten essays are something of a grab bag of autobiographical pieces from over the decades, ending with the credo “A World without Politics.” My favorites in this section are “My Penis is Better than Yours” (no lessons here, just pure fun; don’t read it in public, unless you want to be seen laughing like a madman) and “Toss Another Bag of Coal on the Christmas Fire” (Jim’s Christmas wishes to Santa, e.g., “I wish that a lot of people would stop letting it all hang out and start tucking it all back in.”)

Jim Goad is the best satirical social critic since Mencken, and why drag Mencken into it? Goad was breaking taboos about race, sex, and liberal pieties; spreading subversive memes; and trolling the establishment into frothing breakdowns long before the internet was even a thing. Goad has been called a “godfather” and “icon” of the Alt Right.

I hope that’s true. I hope there are legions of people out there imitating his style and wit and hanging on his every word, because this book can provide a corrective for the worst traits of the Alt Right: its ethos of ironism, frivolity, and self-indulgence, including alcoholism and drug abuse and their attendant lapses of discretion and judgment that explain rather a lot about the movement’s downward trajectory.

In The Bomb Inside My Brain Jim Goad demonstrates that one can combine satirical social commentary with sincerity, sobriety, and moral seriousness. It is truly exemplary. Thus I recommend it to everyone in our movement. You may read it for the style; you may read it for the laughs. But you’ll be a wiser man when you reach the end.

Note: Cut Bezos out, and buy Jim Goad’s books direct from the author at https://jimgoad.net/. He might even autograph them for you.