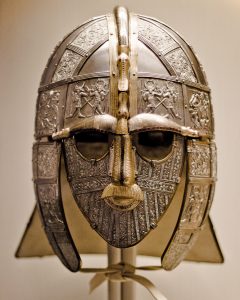 “The Christian fear of the Pagan outlook has damaged the whole consciousness of man.”
–D. H. Lawrence

Mist gathers over the burial mounds rising above the river Deben. A sparkling waterway threads through the heart of the Anglo-Saxon kingdom of the East Angles. This is where Sutton Hoo, the graveyard of warrior kings – a cluster of mysterious earthworks covered with wildflowers and rare butterflies – marks the ceremonial center of sixth-century England. It is a land of bold oak and threaded hawthorn, echoing to the caw of the crow and the call of the horn. Sunlight slithers down the unsheathed blades of the Warlord’s Gedriht, and a forest of ash spears beat bucklers as the scop sings the battle song.

This is our inheritance: A sward of fresh grass where May queens and axe-wielding horsemen lie under cold moons; where badgers waddle, foxes run, and otters hunt in babbling streams under empty grey skies where falcons swoop and magpies fly. And before the helmeted heathens came, the conquering Celts celebrated their Nos Calan Gaeaf rites on All Hallows’ Eve. Burning byres reflect in their smoldering dark eye, their bending bows sending arrows high. Pointed tips punch holes in the Geoguth’s shining mail.

And as the Pictish north came south to break like salt waves over the Northumbrian shield wall at Nechtansmere, where King Ecgfrith fell and King Bridei Mac Bili prevailed, Iona flourished and Bede scribed his Ecclesiastical History of the English People, telling the tales of those distant times. The Brythonic breed fused with German genes to build an empire and forge a crown that centuries later went on to spread its influence so far and wide that upon its glory, the Sun never set.

This is our legacy: A Union upon these blessed isles, a commonwealth of countries, beating hearts tied forever to their own unique mountains and lakes. They may remain friendly rivals, but in the face of adversity they always unite against invasion and evil tides, strengthened by the Viking and Norman blood that wells in our veins and leaves its traces in our names. It is home to the Mother of Parliaments and iconic bards.

So while our enemies plot and scheme, casting their shadows over a history so great, we, who heed the growl of the wolf, stretch our limbs and chomp at the bit, flexing our muscles as our jowls start to drip in anticipation of the feast and fight.

We sense betrayal – and not just from the ermine-draped cadavers occupying the corridors of power in London, but also in our corporate boardrooms, our university common rooms, and editorial offices throughout our land. These are such people as the multimillionaire Roland Rudd, who funds Open Britain; the patronizing professor, David Reynolds, who recently published Island Stories: Britain and Its History in the Age of Brexit, which is clearly intended to refute anything Nigel Farage may say on the subject of an independent Britain, and like every other Left-leaning academic he lashes out sarcastically at earlier foundational texts like Henrietta Marshall’s much-loved Our Island Story (1905); and the smug, self-promoting political scientist Matthew Goodwin, who gave himself to the system’s strategy of demonizing what they consider to be the “far Right” prior to any general election Boris Johnson may contrive. Goodwin penned the cliché-ridden hit piece “HATE INC” in the Sunday Times of October 20, 2019, which is a patchwork quilt of thin arguments, listing in morbid detail nearly every act of violence those seemingly sympathetic to the Right have perpetrated over the last decade without providing the contextual circumstances in the Great Replacement. This is a term Goodwin derides in his article as he opens with descriptions of interviewing beer-swilling skinheads hoarding collections of history books about the Waffen-SS and peddling former Police Commissioner Mark Rowley’s line that “the Right-wing terrorist threat is more significant and more challenging than perhaps public debate gives it credit for.”

Goodwin is the embodiment of the virtue-signaling know-it-all who the media run to for expert opinion, but who in reality knows very little. He is a mouthpiece for the liberal milieu who flirt with knowledge and accuracy only to bend it to their purpose. Their purpose is never to present a balanced view, but to warp the narrative so that the liberal elite can always command the moral high ground. This is a position from which they can look down upon those below and identify and plan how they can see off the nationalist and populist threat to their hegemony so that they can continue to milk the country for all it’s worth and open up our shores to the world.

And so, Canute-like, a few stand, undaunted and undismayed beneath the thousand-year-old Allerton Oak, armed with the certainty of their rightful place upon this spinning globe. They champion cultural practices beside Boann and Brighid’s sacred waters that transcend the ages and the ethnic roots that bind us like vines entwining stones in our native soil. Tales of Cernunnos, Herian, Teutates Lenus, Aine, and Sulis fix us to the Solar Wheel that circles in our subconscious minds. In truth, the hearts of our people still run with Herne through the forest thickets, and a yearning for the wild hunt is embedded in our race-soul.