The exponential growth of the leviathan state is a perpetual Frankenstein tale—each generation regrets and bemoans the growth of the snowball they pushed down the hill.

And indeed, the same phenomenon appears to be in play with the agents of consumer society materialism. Everything keeps getting bigger and bigger, perpetually reaching a new level of uncontrollable “colossalism” every few decades—or even years. And the follies of human nature make it so that every new crop of youth is invisibly inculcated with every ounce of past growth from birth to puberty and beyond. Like the emotionless employees of a porn distribution center who do not bat an eye at the most recent gratuitous filth hitting their warehouse prior to its disbursement to the local smut shops, humanity is forever unperturbed by the ills of everything before its infinite “year zero.”

Essays are structured to be overly optimistic or overly pessimistic—after all you have to conclude something once you’ve analyzed your topic… even if you’re not so sure yourself. With that bias conceded, I’m convinced that in our society Andrew Jackson’s world is harder to fathom than Chewbacca’s… and for a lot of people, they’d fear that statement was too optimistic.

And it is that conclusion that tempts so many of us into the seductive fantasy of complete rebirth through total collapse. 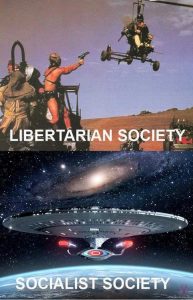 In its proper context, namely the online and dormroom battlefields of Sanders vs. Paul millenials, the idea is to strike fear into the hearts of tepid libertarians. The trouble for “us,” of course, is the conviction that the supposed dichotomy is quite compatible—Captain Kirk just has to be sure to smoke weed, and engage in polyamorous relationships. But let’s set that aside. For now, we can conceptualize a Star Trek reality (Sam Francis noted this decades ago), and we do not like it. A world (and since we only have the one, “universe” could be employed) filled with secular, self-righteous bureaucrats wielding soft power and the occasional precision weapon across time and, dare I say, space, in order to commit sociocide on every last un-secular (religious), un-bureaucratic (hierarchical), and un-self righteous (local, humble) nation does not exactly defy imagination.

Per usual, the hard-left underestimates its own power and influence and blindly believes the masses won’t get with their program simply because they are too stupid to know of it, or too scared to act. The reality is that for at least the last century and a half it is that the masses do not want to live in the utopic dreams of Marxist scribblers. When leftists realize this, they stop being compassionate populists with flawed economic ideas and become elite managerialists. That’s what Star Trek is, and that is what we have. Every day more so.

There is the saying, “better the enemy you know than the enemy you don’t,” but that stops feeling true when your known enemy is all you’ve ever known. So the thinking goes, “better a Hobbesian peak-oil Australian outback” than a post-historical elitist paternalism… forever.

If every generation builds to Star Trek, and every generation takes for granted how close the last generation already got to that point… it might just be time to start over and pray our tribe weathers the ensuing entropy to the kind of heights that can barely be dreamed of under the present order. Whatever chaos comes next might make the horrors of the 20th century pale by comparison, but that truly might be better than a society bearing Francis Fukuyama’s signature that chops away at our very identity with the slow-but-sure methodology of Chinese water torture.

Like F. Roger Devlin, there’s nothing in my spiritual constitution that predisposes me to radicalism. My courting of chaos genuinely comes from my head—not my gut or my crotch. In logically considering the prospects for our people in the future, I cannot come up with a better scenario. Saying, “No worries, we’ll rebuild after the fall,” obviously smacks of sophomoric hubris—but what else do we have? Vote Donald Trump? Start evangelizing racialism at our local church? Write a subtly insurrectional novel, get it published in the mainstream, and watch our ranks flood overnight?

Banking on a massive natural disaster coming and wiping the slate clean honestly strikes me as less “pie in the sky.” Again, please correct me if I’m wrong, please break down your alternative plan piece by piece so I can see exactly how it’ll work so well at every juncture, and in the face of our innumerable obstacles. I do want it to be so. Until I hear it, I’ll keep rewatching Fight Club and considering Lenin.

If you keep a people running in circles long enough—they’ll demand the apocalypse. As Moloc says in his call for war at the first conference in newly-created Hell:

Th’ event is fear’d; should we again provoke
Our stronger, some worse way his wrath may find
To our destruction: if there be in Hell
Fear to be worse destroy’d: what can be worse
Then to dwell here, driv’n out from bliss, condemn’d
In this abhorred deep to utter woe;
Where pain of unextinguishable fire
Must exercise us without hope of end
The Vassals of his anger, when the Scourge
Inexorably, and the torturing hour
Calls us to Penance? More destroy’d then thus
We should be quite abolisht and expire.
What fear we then? what doubt we to incense
His utmost ire? which to the highth enrag’d,
Will either quite consume us, and reduce
To nothing this essential, happier farr
Then miserable to have eternal being:
Or if our substance be indeed Divine,
And cannot cease to be, we are at worst
On this side nothing; and by proof we feel
Our power sufficient to disturb his Heav’n,
And with perpetual inrodes to Allarme,
Though inaccessible, his fatal Throne:
Which if not Victory is yet Revenge.