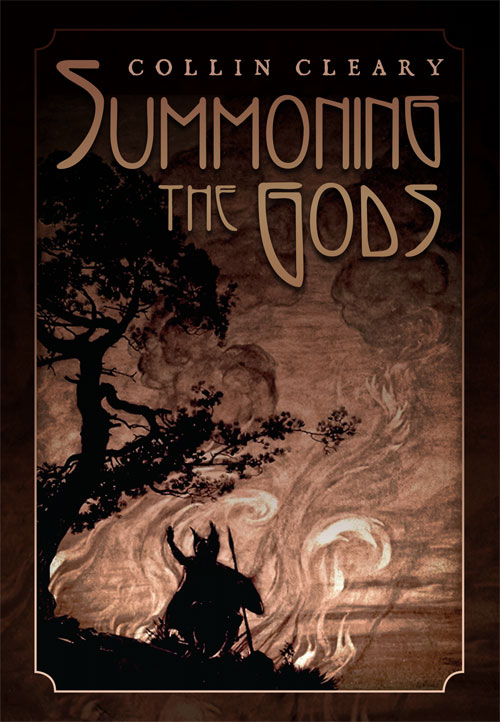 Summoning the Gods: Essays on Paganism in a God-Forsaken World

Edited with an Introduction by Greg Johnson
French description here.

About Summoning the Gods

Neo-paganism is the attempt to revive the polytheistic religions of old Europe. But how? Can one just invent or reinvent an authentic, living faith? Or are modern neo-pagans just engaged in elaborate role-playing games?

In Summoning the Gods, Collin Cleary argues that the gods have not died or forsaken us so much as we have died to or forsaken them. Modern civilization—including much of modern neo-paganism—springs from a mindset that closes man off to the divine and traps us in a world of our own creations. Drawing upon sources from Taoism to Heidegger, Collin Cleary describes how we can attain an attitude of openness that may allow the gods to return.

Summoning the Gods establishes Collin Cleary as one of the leading intellectual lights of contemporary neo-paganism.

Advance Praise for Summoning the Gods

“The writings of Collin Cleary are an excellent example of the way in which old European paganism continues to question our contemporaries in a thought-provoking way. Written with elegance, his work abounds in original points of view.”

—Alain de Benoist, author of On Being a Pagan

“Jung compared the absence of the gods to a dry riverbed: their shapes remain, but devoid of the energy and substance that would make them live among us as they used to. What we await is the energy and substance to flow once more into the forms. The words of Collin Cleary, his thoughts and ideas, constitute the kind of fresh and vital energy that is needed to effect the renewal of the gods in our contemporary world.”

“Collin Cleary’s Summoning the Gods is one of the most important books in its field. Unlike those who would speak for the gods, he shows us how to bring the gods into our lives by letting Them speak for themselves. Perhaps most importantly, Cleary has given serious followers of pagan religions the philosophical tools to defend their beliefs against the most erudite critics.”

“Collin Cleary is a rare breed: a scholar of the mystical, and at the same time a mystic whose probing visions are informed by rigorous study. These are more than just eloquent and thought-provoking essays on myth, religion, or art; at their best, they resonate with the august and ancient tradition of the philosophical dialogue. Time and again, Cleary offers insights that powerfully orient the reader toward archaic ways of thinking, knowing, and seeing vividly—as if through newly opened eyes.”

“I have admired Collin Cleary’s work in TYR and Rûna for years, and I am delighted that this volume of nine essays has arrived in the world. Cleary possesses the admirable ability to write with a frank ‘openness to the divine’ (to use his own phrase). He does so both clearly and profoundly, on a number of inter-related subjects. The essay ‘Philosophical Notes on the Runes’ ought to be required reading for all serious students of the runic systems. This book belongs in every radical Traditionalist library.”

—Juleigh Howard-Hobson, author of Sommer and Other Poems

“Collin Cleary’s Summoning the Gods is a landmark publication in the intellectual side of the Heathen revival. By applying modes of analysis ranging from Heideggerian phenomenology to Hegelian dialectic, Cleary manages to penetrate deep into the core of polytheistic religiosity. Attracting a thinker of Cleary’s stature is an indicator of the vibrancy and health of modern Heathen thought. This book should be a welcome addition to any thinking Heathen’s book shelf.”

—Christopher Plaisance, editor of The Journal of Contemporary Heathen Thought

1. Knowing the Gods
2. Summoning the Gods: The Phenomenology of Divine Presence
3. Paganism without Gods: Alain de Benoist’s On Being a Pagan

4. What God Did Odin Worship?
5. Philosophical Notes on the Runes
6. The Missing Man in Norse Cosmogony
7. Karl Maria Wiligut’s Commandments of Gôt

8. Patrick McGoohan’s The Prisoner
9. The Spiritual Journey of Alejandro Jodorowsky

Collin Cleary, Ph.D. is an independent scholar living in Sandpoint, Idaho. He is one of the founders of TYR: Myth—Culture—Tradition, the first volume of which he co-edited. A fellow of the Rune-Gild, his writings have appeared in TYR and Rûna. This is his first book.