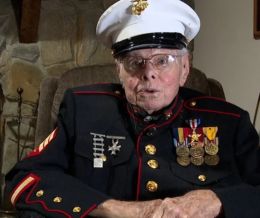 100-year-old Second World War United States Marine Corps veteran Carl Dekel recently gave an interview in which he broke down in tears. He was in full dress uniform and, God bless him, appeared perfectly lucid and aware. He lamented that the United States is no longer the country he had fought for and that his friends had died for. It’s as if he has finally realized that today’s America isn’t worth the tremendous sacrifice he and his generation made 80 years ago.

It’s a gripping, heartbreaking interview, and I advise everyone to view it, because there is much more to it than merely the old griping about the young.

Here’s a taste of what the poor man had to say:

I sincerely believe in this whole world that everything is beautiful. If I wake up in the morning and see these plants out here, and all those flowers that are in there, and green grass on the ground, that’s beautiful. People don’t realize what they have. They bitch about it. Nowadays I am so upset that the things we did, the things we fought for, and the boys that died for it are all going down the drain. Our country is going to hell in a handbasket. We haven’t got the country we had when I was raised, not at all. Nobody will have the fun I had. Nobody will have the opportunity I had. It’s just not the same. That’s not what they died for.

Note the loss and alienation Sergeant Dekel feels about not having a country anymore. I can only imagine his devastation after having given so much. On the other hand, I am confident that Civil War and First World War veterans didn’t feel the same way about their country in their old age. America had changed in the years after their wars, but at a slower pace within the span of their lifetimes than how it is today, where we cram decades of change into single years.

Above all, there was racial continuity back then. In many places in America, you could see strong and fondly-regarded remnants of 1900 in 1940, and of 1940 in 1980, in large part because the same people occupied those places, separated only by generations, and they were not trying to cancel or replace themselves. But how much of 1980 can we see today? With all the racial replacement and cultural degeneracy going on, precious little. There wasn’t much visceral hostility towards our past.

Sergeant Dekel’s interview made me reflect on my decision over ten years ago to enter dissident circles.  Back then, I found myself resenting that white identity was being all but criminalized in my country while other racial identities were being encouraged. I began to empathize with whites who dared stand up to this unjust state of affairs, whereas before I would have just dismissed such people as Nazis. The double standard grated on me, especially considering how most whites were willing to accept it without even a whimper. “We’re acting like a beaten people,” I thought to myself. “We accept the unfair terms dictated to us by others and hope to merely slink by with our lives. This is how people act when they lose a war.”

And as an American, I didn’t remember ever losing a war — especially not to the people dictating these anti-white terms. So what gives?

It took me a while, but the Dissident Right lightbulb began flashing in my mind when I realized that, yes, we did lose a war. It was the Second World War — Sergeant Dekel’s war. The inheritors of the true victors of that devastating and internecine conflict were now the ones compelling people like me to submit to their oppressive agenda. It’s not for nothing that such people never hesitate to smear their political opponents, as well as innocent pro-white dissidents, as Nazis. To them, the Second World War never ended. To them, we’re still in the clean-up phase of that war. The enemy may have been defeated militarily in 1945, but now they must be oppressed into irrelevance or bred out of existence.

In this way, the enemies of Nazism think globally. They are anti-nationalist (read: anti-White­ Nationalist), and so they do not differentiate between a German who was a card-carrying Nazi who fought for the Third Reich and a present-day Englishman, Frenchman, or white American who espouses views they dislike. Any truth or common sense behind these ideas is irrelevant. What is relevant is that the bearers of these truths must be stamped out forever. And what better way to do this than to promote and enforce the immigration and degeneracy that has broken Sergeant Dekel’s heart?

The Second World War should be remembered as the struggle between progress in the form of liberal democracy on one hand and Communism on the other against various forms of traditionalism and blood-and-soil nationalism. The war was sold to ordinary Americans as that of the forces of freedom fighting the forces of tyranny, but in truth the Soviets were far more tyrannical than the Nazis — and more murderous as well. This inconvenient fact had been swept under the rug in most Western societies, or denied outright, as in Walter Duranty’s reporting for The New York Times.

We Americans should have understood what villains we had become when we allied ourselves with the Soviet Union. We should have listened to Charles Lindbergh. People like Sergeant Dekel should have stayed home and let the Germans and Soviets slug it out over Eastern Europe, if that’s what they wanted to do. Better yet, we should have insisted upon the transfer agreement for the Jews, which would have seen the Jews of Germany sent to Palestine, and then offered as much aid as possible to the Germans. Given their human rights track record as of 1940, they were, after all, the true protagonists in their struggle with the Soviets. If the Second World War had been limited to those two world powers, Germany likely would have won and the world today wouldn’t be making people like Sergeant Carl Dekel cry. The world today would still contain many fondly-regarded remnants of 1980, and perhaps some of 1940 and 1900 as well.

I believe that whites everywhere were spiritually gutted by the Second World War. They were horrified by the devastation that they alone were capable of at that time, and wracked with existential guilt over it. The decimation of the white warrior class on the battlefields of Europe and on the islands of the Pacific furthermore left us weaker and more prone to the cultural rot which was to follow soon after the war. For a member of that warrior class to actually live to see the rot in its crescendo in a now-prone West must be a horrifying thing, indeed.

My only hope is for the whites of Europe and America to one day wake up and understand that, although we lost the Second World War, we weren’t beaten so much as bamboozled by foreign elements into fighting each other. And many of these foreign elements were influential Jews in media and government in the United States, England, and the Soviet Union.

We should also understand that nationalism is a beautiful thing — until it isn’t. We should love our nations and our people, but this means that other nations must love their people as well. Not recognizing this leads to empire and to the English seeing the French or the Germans as the other, despite what consanguinity they may share. Not recognizing this helped spark the Second World War.

Since that catastrophe cannot be undone, the best way to reverse its insidious effects is for whites everywhere to coalesce — at least in their hearts — into a single white nation, which contains multiple cooperating diasporas. This will hopefully help to maintain our continuity as a race, make us more suspicious of outsiders who don’t wish us well, and render apocalyptic civil wars like the Second World War less likely to occur.

There will always be war, of course, whether among whites or not. This is a fact of life. But under the White Nationalist model outlined above, the great civilization that whites created will be maintained regardless of war.

And people like Sergeant Dekel will always have a home to return to once the fighting is done.

« Counter-Currents Radio Podcast No. 463 Riley Waggaman on Russia Since the Sanctions