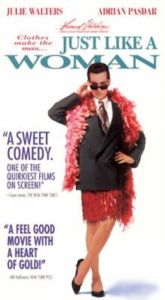 Duty and freedom are two things responsible people must constantly consider when making personal decisions. Too much of the former can make one rigid and overbearing. Too much of the latter can make one self-centered and soft. In a perfect society, I would imagine, people should be able to achieve balance according to their personal circumstances. But how?

An all-but-forgotten movie which touches upon this problem as it relates to today’s transgender wokeness is the 1992 English romantic comedy Just Like a Woman. In this charming — if somewhat formulaic — movie, a London man lives a double life as a transvestite and seeks love after a painful divorce. In the end he must choose between playing it safe in a closet strewn with lady clothes or turning the tables against his scheming, diabolical boss — and outing himself in the process. The kicker here is that Gerald Tilson, played by Adrian Pasdar, is straight and wants to stay that way.

The movie begins when Gerald’s wife comes home early from a trip with their kids and finds women’s underwear all over their bedroom. She assumes that Gerald is cheating on her and divorces him on the spot. Rather than fight for custody and reveal his secret, he lets her go. Gerald then finds lodging in the home of a conventional older woman named Monica (Julie Walters). She learns his secret identity — Geraldine, natch — and falls in love with him anyway.

As their secret romance blossoms, we learn that Gerald’s boss at the consulting firm is looking for auto part companies for their wealthy Japanese clients to invest in. Gerald and his colleague C. J. find a British company, Braxton Brothers, which seems like a suitable candidate. But for some reason, their boss Miles wishes to steer their clients toward companies in France and Germany. Truly a repulsive person, Miles cannot stop condescending to his employees and referring to his Japanese clients as “the yellow peril.” His motto, which he makes his underlings repeat, is “Grab ‘em by the balls, and their hearts and minds will follow.” (And for all you Gen-Xers out there, Miles will make your skin crawl, because the actor who plays him, Paul Freeman, also played the evil French archaeologist René Belloq in Raiders of the Lost Ark. It’s what I call cringe by association.)

As with many movies of this type, life intrudes upon Monica and Gerald and endangers their relationship. Gerald gets caught in a scandal, loses his job, and flees from Monica in a surge of humiliation and self-pity. Meanwhile, at the firm, C. J. learns that Miles plans to sink the agreement which he and Gerald had made with Braxton Brothers. Only Gerald, who is fluent in Japanese, can save the day. And since Gerald can no longer enter the building, it’s up to him and Monica to figure out the one person who can.

You guessed it. It’s Geraldine.

Just Like a Woman is a nice movie with a clever script and a good — if slightly twisted — heart. I hope I didn’t give too much of it away. It’s not perfect, of course. Some of the jokes and double-entendres might be a bit too on the nose. The life-rending power of divorce, which both main characters endure offscreen, is unjustly overlooked. They also seem to gleefully neglect their own natural families as they tramp arm and arm through London’s transvestite underworld. Still, for a 100-minute diversion with a unique take on things, you could do a lot worse.

Beyond its merits as a romantic comedy, Just Like a Woman remains relevant for many reasons. First, it is incredibly, refreshingly white. It features not one token Negro in the entire movie. There are no Pakistani or Middle Eastern extras. Everyone in Monica and Gerald’s circles — including the transvestite community — is white. Even the crowd scenes in London are predominantly white. You have to squint hard to find a single black among them. The only non-whites in the movie are the firm’s Japanese clients who, of course, will presumably return home once their business in England has concluded. What’s more, they don’t even speak English.

I don’t know if this total white-out was a conscious decision on the part of director Christopher Monger, but even as far back as 1992, London was a racially diverse place, and political correctness was strong enough to enforce ethnic minority product placement in movies. Yet Just Like a Woman says no to this — and the fact that the friendly and charming C. J. is somewhat exotic for being Scottish and is caught at one point (thematically) wearing a kilt doesn’t count. Today, Just Like a Woman acts as a time capsule, reminding us of what whites were like when they had more self-confidence than they have now.

Another cause for Just Like a Woman to be remembered is its latent British nationalism. Not only do the protagonists push for Japanese investment in Britain (against the wishes of the globalist Miles), but the Braxton Brothers representatives come across as competent, no-nonsense people. Mr. Braxton himself stands up to Miles towards the end of the movie and quite literally calls bullshit to his face, leading to a funny moment when the translator must explain to the Japanese company’s President what “bullshit” means.

It’s more than all this, however. When Gerald, C. J., and Monica are trying to figure out why Miles is so bent on steering his clients away from Britain, creepy music is heard on the soundtrack. Taking business away from the British and giving it to foreigners is depicted as inherently bad and reflects an invigorating, if subtle, pre-Brexit nativism.

Most importantly, Just Like a Woman offers incisive counterpoint to the rise of transgenderism as the latest political identity group in the West. The movie opens with Gerald as a boy admiring his mother as she dresses for a formal engagement, while Doris Day’s luscious “Que Sera, Sera” plays on the soundtrack. Clearly he’s in awe of feminine accoutrement. Quaint and curious in 1992, such tendencies 30 years later have become legal grounds to fill the boy up with hormones, graft a pair of breasts onto him, and cut off his balls.

This leads us back to the notion of balance between duty and freedom. Despite his anti-orthodox sartorial habits, Gerald remains aware of the duties a man must perform in a productive society. He has a wife, children, and a serious career; there is not much more we can ask of a private individual. I maintain that a high proportion of the kids we are mutilating today as part of the international transgender recruitment project are like Gerald: different, but not so abnormal that they cannot learn to function as proper men and women when called upon. And this includes the children who may end up being homosexual.

By placing all sorts of gender-bending — surgically induced or not — on par with traditional gender roles and heterosexual marriage, we in the West are committing a grave error. This dysgenic practice can only lead to our civilization’s swifter degeneration. Furthermore, elevating what is in the worst case a rare mental illness into an aggressive identity group with its own anti-traditionalist agenda will only guarantee more internal strife as the West sinks into the abyss. Just Like a Woman, however, shows us that it doesn’t have to be this way. A person can be different, even radically so, and still contribute eugenically to our society.

And, if they’re lucky, they may even find love.