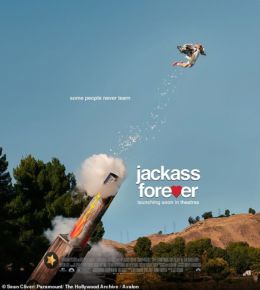 I entered the theater to see Jackass Forever with equal parts hope and trepidation. For years, Johnny Knoxville and the Jackass crew have been a guilty pleasure of mine which, believe it or not, I have grown to cherish. They were never our guys in a political sense, not even implicitly. Given the flagrant degeneracy, delinquency, and irresponsibility of some of them, I wouldn’t want to know where they stand politically, or if they even have the presence of mind to take a stand at all.

Further, a drunken Ryan Dunn’s highly-publicized car wreck in 2011 which killed him and a passenger did drape a heavy pall upon the franchise. Still, throughout this century I have often found myself returning to Jackass as a much-needed refuge from political correctness and our increasingly perverse woke culture. Ingenious stunts and wicked pranks never threatened to make the show highbrow or subversive, but at least it was honest about what it offered and pure in its efforts to entertain.

Springing out of the skateboarding culture of the late 1990s, Jackass began as a white male phenomenon. It was where boys could be boys, and their ids could beat the living shit out of each other for the sake of provoking profane, juvenile hysterics. Watching them consistently find clever ways to subvert norms of common sense and decency (to say nothing of self-preservation) was quite liberating. Sometimes their ideas alone were chuckle-worthy. Beehive Tetherball, the Golden Snow Cone, the Toro Totter, Demolition Derby Rent a Car — the stunts just write themselves, don’t they? If you take Candid Camera, Evel Knievel, Buster Keaton, sports bloopers, and Mutual of Omaha’s Wild Kingdom and mix them all up with a giant bag of farts, barf, and excrement, you’re pretty much going to end up with Jackass.

At their apocalyptic best, they could produce large-scale stunts ranging from the sickeningly vivid to the gloriously near-suicidal. For examples, see the Poo Cocktail Supreme from Jackass 3D or the Big Red Rocket from Jackass 2, which quite literally put Knoxville within a few inches of death. With the help of pyrotechnics, Newtonian physics, and slow-motion photography, they could also produce a kind of weightless, slapstick ballet, the appreciation of which goes well beyond the ironic. See the panoramic finale of Jackass 3D for a great example.

Prior to Jackass Forever, woke scolds and other Left-wing progressive types tolerated the program largely because Jackass was apolitical and never tread upon the three pillars of cultural Marxism: race, gender, and sexuality. And if you hate white people, what’s not to like about watching Knoxville get kicked in the nuts repeatedly by a queue of kindergarteners, or Bam Margera getting a cattle brand on his ass, or Dunn getting pummeled by a female Japanese champion kickboxer, or Dave England screaming in terror as he rides a firehose 20 feet in the air like it’s a bucking bronco?

Regardless, Jackass was still a white guy’s thing. It was where we could go to enjoy some good, old-fashioned degeneracy and escape from the more insidious degeneracy found almost everywhere else in today’s pop culture. Indeed, what would you rather have, Steve-O eating a “vomlet” or drag-queen story hour with your five-year-old? At least in the former case, you won’t lose your career if you call the stunt disgusting.

But like all things, the pure must become tainted, the great must be laid low, and the high-flying Icarus must sooner or later come crashing down to Earth (more on that later). Seriously, the previews for Jackass Forever showed quite a bit of new blood, which is reasonable considering how the cast members are now in their mid-to-late forties and are getting a bit long in the testicles for this kind of tomfoolery. Unfortunately for people like me, however, over half of the new cast members are black and one is female. I can imagine the Hollywood executives telling Knoxville and long-time director Jeff Tremaine that Jackass Forever would be a no-go unless the boys injected some much-needed diversity into their idiotic production, regardless of quality.

Jackass Forever succeeds in spite of its woke convergence, but still suffers from it. The stunts certainly meet the group’s previous standards of ingenuity. We have Chris Pontius’ penis dressed up like Godzilla and getting bitten by a turtle. We have Wee Man dangling in the air from a wedgie. We have Steve-O lighting a fart underwater. We have Danger Ehren in an electric chair getting shocked while a bear eats salmon off his crotch. We have Dave England getting covered in pig semen. We have the boys vomiting milk while on a high-speed carousel. We have the marching band treadmill, which ends with Steve-O lying unconscious next to a trombone. And for the pièce de résistance, we have Johnny Knoxville reaching new heights as a winged Icarus being shot from a cannon. Nothing terribly surprising, given the group’s extensive body of work, but still impressive if you’re into this sort of thing.

The new crew is a disappointment, however, mostly due to lack of character. With the original team, one gets a feel for their individual personalities. Not so much with the new folks, with the exception of the extroverted (and very black) Jasper Dolphin. But even he cannot replicate the irreverent joy the original cast expresses during all this insanity. And what his inarticulate ex-con father contributes to these stunts is anyone’s guess. Zach Holmes, on the other hand, is little more than obese and durable. Watching his tattooed blubber ripple in the air before he crash-lands in a cactus patch is breathtaking, sure. But then he gets up and walks away like it’s nothing. Part of the fun of Jackass is watching the guys writhe in pain after their stunts. If they were truly tough, they wouldn’t be so funny. And Zach Holmes is, if anything, tough — which means he isn’t very funny.

A word must be said about Rachel Wolfson, the female addition. Her two stunts were lame, to say the least, and the movie would have much stronger without her. The only stunt of hers I remember is her getting bitten on the lip by a scorpion — and her reaction is boringly stoic. I apologize for my high-handed attitude, but she just doesn’t fit in with Jackass — nor should any woman, for that matter. Could any of us imagine a woman in a room with Knoxville, Steve-O, and the others, stripped down to her underwear and setting fire to her farts or slicing paper cuts between her toes? How about having her eat dried cow manure while getting pelted with paintballs, or getting blindsided on the dome by a boxing glove while the Rocky theme plays? Call me a purist, but it rankles me just to think about it.

One final point. Jackass Forever did something I never thought possible. It made me feel sorry for one of its cast members: Danger Ehren McGhehey. Jackass is not supposed to cause such reactions. We’re supposed to gawk and guffaw, not well up with distress and compassion. In the middle of the movie we are treated to an extended version of Knoxville’s “cup test,” in which a person wearing a jockstrap and athletic cup suffers repeated blows to his junk. In this case, Ehren is the victim and, in continuous succession onscreen, gets punched by black UFC heavyweight champion Francis Ngannou, pelted with a softball by softball pitcher Danielle O’Toole, beamed with a hockey puck by black hockey player P. K. Subban, and stomped with a pogo stick by another cast member. It’s not that they went too far with this stunt; they went too often. It was funny the first couple of times. After that, it was squirm city.

Moreover, is Jackass now in the business of emasculating white men? Eh, probably not, since it’s still consistent in relation to similar stunts they performed in the past. But still, would black audiences sit still while watching one of their own getting jammed in the jewels over and over by a succession of snickering white guys? Again, probably not. So then why did Tremaine and Knoxville expect their white audience members not to feel the same way about Ehren? Why did they select a black hockey player when there were so many white ones to choose from?

Well, we all know why. Whites are not allowed to view race as blacks view race. Blacks can become protective of their own, while whites cannot. This double standard has become so ingrained in the minds of whites that major motion pictures can now depict blacks abusing white manhood in real life and expect nothing but laughs.

Despite these major hiccups, Jackass Forever delivers well enough on what it promises. The stunts are clever and real. Guys split their sides laughing, and some go to the hospital as a result. Despite its aging cast, the Jackass franchise is as committed as ever to high-concept sophomoric entertainment. And, yes, a 49-year-old Johnny Knoxville really does get tossed on his head by a bull. Bully for him, and bully for his fans.

Jackass has shown over the years that it can actually pay to be a glutton for punishment. The irony of Jackass Forever, however, is that during several moments it’s the racially-aware audience that finds itself being punished.

« Not Kinder, Not Gentler, but Ineffective

» On the Importance of Recruiting Non-Political Dissidents