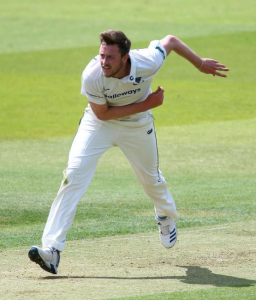 Cricket. Not as homely as “mom and apple pie,” but, to the Englishman, just as evocative of home. If American readers don’t know the game, I won’t attempt to explain more than to say it’s the one that is played by what look like hospital interns using bookshelves as bats who attempt to swat a baseball-sized, rock-hard, red leather ball hurled by a bowler (a sort of sprinting, dervish pitcher) who runs at them and forces them to protect what seems to be a tiny cattle fence while not allowing their resultant shot to be caught “on the fly,” as you might say. I played the game as a boy and I love it. Or, rather, I loved it.

I won’t be watching any more cricket.

England did not just export the game to its Commonwealth countries — The West Indies, Sri Lanka, Pakistan, and Bangladesh have all benefited, financially as well as culturally — but also produced some of the great players in the game’s history. In my adult lifetime, Ian Botham, Graham Gooch, Jimmy Anderson, the mercurial David Gower, Geoff Boycott, Ben Stokes, Mike Atherton, and many more have broken both cricketing records and opponents’ hearts. And there is nothing better than watching the rise of a future star in the cricketing firmament, just as there is nothing more heartbreaking than seeing a promising career cut short by injury. Injury or, in these vile and ideological times, something else.

Ollie Robinson had the world of cricket at his feet. After a brilliant debut test match against New Zealand (tests are official series between national sides, the most famous being the Ashes, played between England and Australia), Robinson looked a star in the ascendant, performing superbly against a strong Kiwi side. Someone else going great guns was the spectator who ran through Robinson’s social media activity over the last decade. He or she — they are always anonymous when they are approved by big tech — found some Tweets from around 2012, when Robinson was 18 years old. He did this while Robinson was playing in his brilliant debut.

Robinson has now been dropped from the England squad for the next test match, and the possibility remains that he may not play for my country’s cricket team again. What would have been the greatest day of any sportsman’s life was reduced to the cultural equivalent of being dragged through Peking’s city streets in 1960 wearing a conical hat reading “I disagreed with Mao!”

Okay, here is what I am not going to do. I am not going to quote the Tweets. Not because I am a faggot who writes for the British MSM, but because I am going to act like Swedish staff act at airports, hotels, or stores in that doomed country, the ones who expect you to print your own luggage labels, carry your own baggage to your room, make your own bed, and wrap your own produce if you want it wrapped, because, in their own words — usually in impeccable English — why should I do something you can do yourself?

Robinson wrote some silly, boyish comments from what is already a bygone age, and many white sportsmen (not so much women, who get a pass by virtue of having vaginas, which you are allowed to have when it suits you) will have promising careers cut short by 140 characters written when they were kids.

There was always a casual racism about the game. Banter — some of it nasty and deliberately provocative, intended to rattle the opponent’s concentration — between bowler and batsman is known as “sledging.” In a famous encounter, burly Australian bowler Merv Hughes was slinging it into famous Antiguan player Sir Vivian Richards — universally agreed to have been one of the greatest batsmen ever to have played the game — and giving him what the Australians call ‘verbals.” At one point, after a particularly snarky comment, Richards shouted back up the 22-yard bowling table, “This is my island! In my country, we have respect!” The next ball, Hughes had Richards out, and, as the great batsman walked off the pitch past Hughes, the Oz bowler with the famous walrus mustache said, “In my country, we just say ‘fuck off.’”

There won’t be any more of that, at least not from white player to black player. The current mood is summed up by the fawning acquiescence of the British press, whose white journalists have such a hard-on for black men they should get a room. The Daily Mail, laughably described as a Right-wing newspaper, called Robinson’s juvenile and mild Tweets “vile.” The other newspapers stuck with approved brand names such as “racist,” “sexist,” and “Islamophobic.” Robinson was reduced, inevitably, to a pathetic apology, which apparently “impressed his teammates.” It won’t do him any good. You can recant on the gallows. They’ll still hang you.

Any English sporting team with any balls other than the ones they use for the game itself would have gone to the team manager and the English Cricket Board (ECB) and told them to fuck off. Instead, manager Graham Thorpe (who played for England as well as my home county of Surrey) mumbled some woke-lite gibberish designed to cover his arse the same way batsmen cover their balls with the well-known “box.” (I’ve been hit in the pills by a cricket ball when unprotected, and I must say I have felt better). The ECB has said they are “determined” to punish Robinson.

Cricket is an extraordinary game in that an intelligent captain (the great English skipper Mike Brearley spoke and thought like a mix between a chess player and an aristocrat) can out-think his opponent and thus defeat the whole team. The game, at test level, can last five days and still produce no result. Its honesty and the integrity of the players is — or was — so ingrained in the national psyche that behavior deemed less than honorable used to be described as “just not cricket.” As my father taught me, cheating in cricket began with the Pakistanis around the same time as cheating at football was perfected by the Italians.

Now, the white batsman is not facing a rampaging fast bowler from the West Indies, but a legion of pasty white students with bad skin who despise the game because it is synonymous with their own country and its erstwhile empire, which they hate every bit as much as some idiot with her arm covered in self-inflicted razor swipes. Cricket has gone the same way as all other English cultural ramparts currently being dismantled by a new wave of intellectual zombies every bit as dominant as any of the great batsmen or bowlers of the golden age of what was a great game.

I hope, heartily, that England loses every test they ever play, including the current one, which could be Robinson’s last. I would have hoped that anyway just because of the team kneeling before recent matches and standing respectfully with shirts celebrating blackness, a phenomenon which has done far, far less for blacks than the invention of cricket ever achieved.

I also hope the English football team is embarrassed at the Euros, the upcoming international football tournament. They were, at the last one, knocked out by Iceland. That was doubly amusing, because when boffins who are interested in genetics and literal racial purity look for the country with the purest DNA on the planet, which one are they forced (in whispers) to admit comes out on top? That’s right. Iceland, the world’s whitest country. I hope England loses at everything, because I am done with the place.

England had an empire and she lost it. Then, at least she still had a country. But even that she is now in the process of giving away, and the surrender of cricket to the whole shebang of the pathetically named “woke” culture is pretty much it for me. We didn’t listen to Tommy Robinson, so Ollie Robinson gets what’s coming.