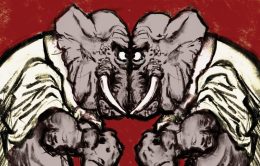 Another example would be feminism. Can someone be a White Nationalist and feminist? Sure. But, again, the former must come before the latter. We all know that in the West, men tend to be more ethnocentric than women. Therefore, in order to maintain its ethnocentrism, it wouldn’t be unreasonable for a white ethnostate to deny women the vote. After all, voting is a political right, not a human one. If a feminist opposes such a white ethnostates, then she is not a White Nationalist. She is a feminist who prefers to be around white people. Big difference. Theoretically, this could apply to men as well. In a bizarro world, if women were reliably more ethnocentric than men, then a white ethnostate would have grounds to deny men the vote for the same reasons. (Not that restricting the vote at all would be a requirement in either case.)

The same applies to democracy, fascism, libertarianism, theocracy, and any other system you can imagine. Any proponent of any of these systems can be a White Nationalist as long they are willing to set aside their allegiance to their system of choice if need be. We can compare White Nationalism, or any other serious political movement, to an airplane. You can only bring so much baggage. And you will have to stow your bigger items, or you can’t get on.

These theoretical distinctions may matter now more than ever for White Nationalism. At the moment, White Nationalism is all but criminalized in the United States. Recently, Congress voted unanimously to condemn it. To be an open White Nationalist makes one nigh-unemployable and opens one up to harassment from the populace and government alike. Therefore, discriminating between “us” and “them” becomes vitally important if the movement wishes to survive. Keeping people in who are not committed makes the movement just as weak as keeping people out who are, or could be.

One concept I remember from my political science classes goes like this: If you identify with someone, then you will interpret his words in the best possible light. On the other hand, if you don’t identify with a person, you will interpret his words in the worst possible light. For example, Somali Congresswoman Ilhan Omar recently announced that “this is not going to be the country of white people.” Jewish academic Noel Ignatiev is also well-known for calling for the abolishing of “whiteness” and for stating that “treason to whiteness is loyalty to humanity.” Because non-whites and anti-whites are likely to identify with people like this, they will just as likely put a positive spin on their positions. For example, they will claim that neither Omar nor Ignatiev wish to physically harm white people.; rather, they simply wish for the privilege that supposedly accompanies whiteness to go away so that people of all races can equally enjoy America’s prosperity. For a White Nationalist, however, such positions would and should be interpreted in the most pessimistic manner possible. People like Omar and Ignatiev wish to ultimately destroy white people, plain and simple. We must assume malice unless the person in question goes out of their way to prove there isn’t any.

Such a dichotomy is well and good when interpreting the words of people who are not part of your movement; neither Omar nor Ignatiev will ever claim to be an ally of White Nationalism. But what of the words of those who are?

An Overton window exists in any political movement. There must be a range of acceptable beliefs which fit under a big tent, and as long as people stay within that tent, they can still be considered “us” rather than “them.” For example, despite not openly calling for a white ethnostate, Jared Taylor should be considered one of us thanks to his tireless white advocacy and identitarianism. This means that people inside that tent should interpret every controversial thing he says or does in the best possible light. Recently, John Derbyshire promoted his idea of an “Arctic alliance” between whites and Asians at the American Renaissance conference. Does this mean that Taylor is going soft on white identity, or is encouraging white-Asian miscegenation? I guess if we wish to cast him out of the White Nationalist tent, we could take such a jaundiced perspective. But that would be extremely presumptuous and politically stupid, let alone manifestly unfair to Taylor. The best possible interpretation would be that Taylor respects Derbyshire and gives him a good deal of latitude whenever he shows up to speak at AmRen.

Because he is one of us, we must always assume the best from Jared Taylor. So if Jews look white to him, well, we just have to assume that the JQ is not his thing and leave it at that.

As for Derbyshire, he’s not one of us – but he’s pretty close. There is significant overlap between White Nationalism and Derbyshire’s brand of race-realism and IQ elitism. Therefore, he’s an ally. When he says something we agree with, we say what an intelligent and perspicacious man he is. And when he says something we don’t agree with – such as forming the aforementioned Arctic alliance against the rising tide of Sun people from his book We Are Doomed – we just shrug and say, “Well, he’s mistaken.” What we don’t do is mutter darkly about how he’s thrown his lot in with the Asians and wishes to hand over California to the Chi-coms.

We can go even further and look at Donald Trump. He’s quite a bit farther away from White Nationalism than is John Derbyshire, but isn’t necessarily hostile to our interests. When he does something we like, such as tweeting about the oppression of white South Africans or proposing a Muslim ban, we praise him for shifting the Overton window rightwards and buying our movement time. And when he does things we don’t like, such as proposing merit-based immigration or lobbing bombs into Syria, we criticize him for falling under the influence of our globalist enemies. But what we don’t do is declare him Enemy Number One and attempt to sabotage his presidency.

Of course, the further left we go, the more cynical and suspicious our interpretations must become. I really believe that many leaders and power players in the Democrat Party would send White Nationalists off to gulags if they could, regardless of what they say.

In order to prevent this from ever happening, people in White Nationalist circles should by default put positive spins on controversial things fellow travelers do or say unless they have significant reasons not to do so. This will cut down on the bickering and make us a more cohesive and disciplined movement – and one that is more attractive to outsiders. In many ways, we are the only friends we have, and I, personally, am loath to push anyone out unless absolutely necessary. Reasoned criticism, of course, should always be welcome. Greg Johnson’s review of Taylor’s White Identity is a great example of this. Unreasonable criticism, such as the crude anti-Semitic barbs Paul Nehlen’s supporters lobbed at Taylor on Gab after Taylor disinvited the Wisconsin politician from speaking at the 2018 AmRen conference, is not.

I have to admit that I have a personal motivation for writing this article. My last article for Counter-Currents, “Two Red Pills from the World of Chess,” unexpectedly generated a tremendous amount of controversy in the comments section. Most of the time, any criticism I get is fair, and this proved no exception. However, one commenter really took me to task. Basically, this person assumed the absolute worst about me – as if I were one of “them” and not one of “us.” (My assumption here is that this commenter is at the very least sympathetic to White Nationalism, since that is the major platform for Counter-Currents, and so is one of “us” and not “them.”)

Here is the offending passage which this commenter correctly pointed out as flawed:

Men are much more likely to be born with the character traits required to be competitive chess players. One needs, among other things, strong powers of concentration, spatial sense, a vast memory, logical ability, and a burning desire to win.

Based on this, the commenter assumed I meant to say that women are born without spatial sense and logical ability. And from here, the commenter made some valid points and concluded that I am not honest and that I am “motivated by an animus against women.”

This is untrue, and anyone who knows me in my normie life will attest to that. The commenter assumed there was malice when there was none. I have to admit, however, I did leave that passage open to such a hidebound interpretation. But where the commenter assumed (not unreasonably) that it was deliberate, I must state for the record that it was by accident. I was writing this article in the wee hours of the morning and I had made a mental note to add qualifiers – and then forgot.

I should have written something like this (emphasis, of course, mine):

Men are much more likely to be born with the character traits required to be competitive chess players. One needs, among other things, strong powers of concentration, freakishly powerful spatial sense, a vast memory, incredibly deep logical ability, and a burning desire to win.

To the commenter’s credit, when I pointed this out, the person eased off the throttle a bit and explained why they were put off in the first place. I totally understand and I hope the person will continue to comment on my articles and others at Counter-Currents. I just wish that the default response had been something positive like “Quinn made a mistake,” rather than something negative like “Quinn hates women.” We are all on the same team, so we don’t need to draw swords so quickly, do we? For example, I could have drawn mine and responded by accusing this person of hating men, or aiming to sabotage White Nationalism, or some such nonsense. But I didn’t because it wouldn’t have been polite or respectful; I strongly doubt that it is true; and I have love for people in this movement. Regardless of your attitude towards me or my writing, if you come to this site and feel motivated enough to constructively comment and debate the important topics of our day, the last thing I want to do is alienate you.

To do so would only weaken the movement by turning “us” into “them.” It would also break my heart.