There Will Be Civil War 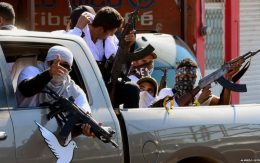 One of the great fallacies of historiography is the concept of the “Butterfly Effect,” that is, the idea that any little action – no matter how mundane or insignificant – can potentially alter the course of history. While this is a wonderful premise for a short story or a movie – and with all due respect to the Annales school of historiography – the “Butterfly Effect” has little actual historical support. Much to the chagrin of Marxists, feminists, and European-style socialists, history is only capable of being altered by uniquely gifted individuals whose greatness does not embody, but actually transcends, the Zeitgeist. Most people nowadays do not live lives of quiet desperation, but they do live lives of historical insignificance. This is not to denigrate the efforts of the common man and woman but to deal honestly with their contributions to the historical process. A healthy civilization requires a vast multitude of hard-working decent people who raise good families and contribute to the common weal, but whose influence is largely unfelt after two generations. It is a sobering thought to contemplate that one is neither Napoleon nor Zarathustra, yet it is a thought that needs to be taken into account if we are to deal objectively and successfully with the historical processes that are unfolding at a nearly exponential rate.

Throughout history, there are numerous examples of historical processes that, once begun, are seemingly incapable of being mitigated. The mobilization of troops before the Franco-Prussian War and the First World War are two examples that have often been cited by historians as events that snowballed out of control and made war almost inevitable. There was no figure of overweening personality and historical significance during the First World War who could put the brakes on the mobilization process. Like any organic process, the prelude to that war continued to its logical and largely predetermined conclusion.

The attempted demographic replacement of the white race has been the result of an overwhelming concatenation of historical forces: the post-Second World War desire for one-world government driven by Marxism and late-stage capitalism (really two sides of the same coin in which human beings are viewed as fungible commodities); overt hatred of whites by the inferior races motivated by jealousy, exemplified by such mulatto monstrosities as Count Coudenhove-Kalergi; the extension of suffrage to women, resulting in the privileging of the politics of feelings over the politics of reality and rationality; the collapse in moral authority of the Christian churches, which is now more or less complete with the loss of the Roman Catholic and Southern Baptist churches to the Left; the feminization and Negrification of the American educational system, which has resulted in plummeting test scores and a rapidly declining national average IQ; and the domination of the financial, information, and entertainment sectors of the economy by European-style socialists. There has been nothing to slow the “progress” of the historical forces arrayed against the white race until the advent of Donald Trump: not the Alt Right, and not even the sainted Ronald Reagan. The disaster for the Alt Right that was the year 2017 was largely the result of many in it foolishly believing that they were part of the avant-garde, that somehow they were the “Great Men of History” causing a sea change in the course of historical events, and that President Trump was a puppet for them to command. Events have proven the reverse to be true. Trump really is the agent of historical change, and we are all merely along for the ride. It is a bitter pill for many in the Alt Right to think that a dreaded Boomer is the best chance for the salvation of the white race and the renaissance of the United States – but history abounds with cruel ironies.

I believe that an objective reading of the historical events of the past several centuries leads to the conclusion that there is no peaceful road to the ethnostate or a return to the America of pre-1965 demographic conditions. There is no Negro political leadership that is capable of negotiations. The low average IQ of Negroes extends to their leaders, especially to their elected representatives, who believe that Guam might sink if too many Marines are sent to the island. While the mestizo Mexicans are slightly more intelligent and better organized than their Negro counterparts, they are actually more violent, and are the fifth column of an invasion controlled by the Mexican government. We must assume that among the Mexican invaders are organizers and even deep-cover Mexican military agents who can assert command-and-control authority when the time comes. As Trump has become more and more successful, the Left has ratcheted up its rhetoric to the point of advocating violence. They have no choice but to double down on their rhetoric, which means that soon we will see actual violence in the streets from the Left. The civil war will come, and it will be initiated by the Left. For the most part, this will be a war with mestizos. The Negroes will be content to loot and rape.

As more whites become racially conscious and increasingly vote as a racial bloc, expect to see even more strident calls for white genocide emanating from the Left. The Deep State and its media puppets will probably increase their calls for resistance to Trump that fall just short of explicitly calling for armed insurrection. But the radicalized members of the Left will view this as a call to arms. There will probably be an event in 2019 in which ICE agents or other federal officials are ambushed and/or executed by mestizo revolutionaries. This will be spun by the Left as a “righteous” action against “racists” and could be the signal for the beginning of a general mestizo uprising. Additionally, the 2020 Census is going to be every bit as contentious as the 2020 presidential election, and it is very likely that a mestizo revolution could commence as more and more mestizos are deported and federal laws are promulgated to prevent illegal aliens from voting. It is very easy to imagine a scenario in which the state of California is declared to be in open rebellion against the United States and will need to be occupied by federal troops.

There are several other flashpoints that could be used by the Left as signals to launch the mestizo uprising. First, the Trump administration is currently discussing the eventual elimination of affirmative action. Eliminating racial preferences would cause hysteria among low IQ Negroes and mestizos, who would once again be forced to compete with higher IQ whites and Asians; and second, Trump’s numerous federal court appointees are very soon going to have a profoundly negative effect on the Left’s ability to use the judicial system to mitigate pro-white legislation and executive actions.

We also need to consider the financial, political, and military resources of the anti-white Deep State and its allies. The FBI, CIA, NSA, and the upper levels of the Pentagon are deeply compromised. While it is estimated by some that twenty percent of the members of the armed forces are supportive of White Nationalist views, it is important to remember that officers at the level of three- and four-star generals are mostly politicians and administrators who have little in the way of real combat experience; needless to say, the political generals hold mostly Leftist and/or globalist views, and are more oriented toward NATO and Israel than their country of origin. The political officer corps is by no means enamored of Trump, and its loyalty to the President and the citizens of America is questionable at best. Secondly, almost all of the executives of Silicon Valley tech monopolies are Leftists, as are the bulk of European-style socialists who control the financial and fake news/entertainment sectors of the economy. The education system and almost all religious institutions are in the hands of the Left, and are profoundly anti-white.

What, then, are the advantages held by White Nationalists?

In the end, I hope that I am proven wrong. I sincerely hope that some semblance of sanity exists among the Negro and mestizo political leadership, but I am not sanguine about it. History tells me that I am more likely right than wrong, and that the years 2019 and 2020 will be very bloody, indeed.