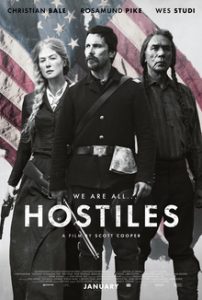 Never have I seen a movie cuck so hard, so fast.

Normally, I wouldn’t even consider reviewing a movie that is so antithetical to the goals of white advocacy. Why write up two thousand words on a movie that few of us will see and even fewer should? Because if there were ever any doubt about how Hollywood is teeming with our enemies like mosquitoes buzzing around a swamp, the movie Hostiles should lay it to rest forever.

The term “hostiles” in this case refers to whites versus Indians. Like so much about this movie, however, it is a lie. The only real hostility being shown here is against white people, and it is as contemptuous as it is murderous in the end. But in the beginning, not so much. That’s why Hostiles is astoundingly dishonest. The first 40 minutes of this 130-minute movie offers a respectably pro-white perspective, both in a textual and subtextual sense. It’s also demonstrative of the fact that whites were not without sin on the frontier. It was a rough land, and it took rough men to break it. Despite this, the movie starts out by exuding unmistakable sympathy for the white perspective. There is little differentiating it from countless other Westerns from over seventy years ago: whites are depicted as pioneers and settlers who must maintain high levels of civilization in the face of a forbidding desert, antagonistic and semi-civilized Indians, and villainous whites who take advantage of the lawless nature of the territory for their own purposes. There may be good Indians in the mix and bad whites among the good, but the Western genre is first and foremost about the white experience in an environment that is, well, hostile.

It’s 1892 in New Mexico. Rosalee Quaid, played by Rosamund Pike, watches in horror as four whooping and hollering Comanches invade her homestead and murder her husband. They put a bullet in his leg, shoot an arrow through his chest, and then scalp him – of course, we witness the gory details. Then, as she flees with her children, the tots get picked off one by one. Rosalee hides to escape capture and ultimately survives, presumably to carry an albatross of Indian-hate for the rest of her life.

Now, so far, this is about right. The Comanches were perhaps the most feared and hated North American Indian tribe of them all, and not just by the whites. Other Indians hated them just as much. According to S. C. Gwynne in his Empire of the Summer Moon, “To their enemies, the Comanches were implacable buffalo-horned killers, grim apostles of darkness and devastation.” They were known for gang rape and the torture-murdering of infants. The Indians who checked Spanish expansion in North America through endless guerrilla warfare were the Comanches. And they likewise mercilessly raided other, more agrarian Indian tribes such as the Chickasaws, Choctows, and the Creeks. Finally, as an aside, the Indians John Wayne had to contend with in The Searchers were Comanches.

So, from the audience’s perspective in the first part of the film, the Indians are bad news. This is why we don’t immediately condemn our main character, Captain Joseph Blocker, played by a mustachioed Christian Bale, when he hauls a family of escaped Apaches back to Fort Berringer. One he literally drags on horseback. It was a tough world back then. Tough tactics were required.

The plot essentially begins when the fort’s colonel puts Blocker in charge of returning a dying Cheyenne prisoner, Chief Yellow Hawk, and his family to his tribal lands in Montana; at which point, after years of killing Indians and watching his friends being killed by Indians, Blocker is told that he can retire. Of course, Blocker refuses, saying that Yellow Hawk is a vicious killer with a long history of murdering whites under his braided leather wampum belt. He hates Yellow Hawk and would just as soon kill him as take him anywhere. But orders are orders, especially when they come down from on high, in this case from the President of the United States.

Now that we have been presented with its formula, we can freeze-frame the movie and predict how it’s going to play out: Blocker at first has a hard time with Yellow Hawk. They run into Rosalee, which makes things even worse. They overcome their hatred as they battle alongside each other against bad guys. Blocker and Rosalee fall in love. Blocker and Yellow Hawk reconcile. Then they get a grateful Yellow Hawk and his family to their destination safe and sound. Cue rousing score over credits.

This is essentially what happens, and it’s been done successfully many times in the past, most notably in The Defiant Ones with Tony Curtis and Sidney Poitier. 48 Hours with Nick Nolte and Eddie Murphy is another great example, but there really are too many to count. There’s nothing inherently wrong with the formula, of course. The enemies-to-frenemies-to-friends transition can evoke a strong emotional response, especially when done across racial or ethnic lines. It’s the kind of scenario that almost writes itself. But for it to work, there has to be balance. When one half of the duo completely capitulates to the other, then you’re tipping the scales; you’re saying that one side is more deserving of our empathy than the other. This then creates openings for ideology or messaging to slip through. And nothing ruins art worse than ideology and messaging.

Hostiles is interesting in the way it tips the scales, however. The first 40 minutes actually tips it ever so slightly in favor of the whites. With Cultural Marxism the way it is today, any pro-white scenario is hard to visualize when white characters interact with non-whites on screen – especially in a historical context where whites were presumably committing their greatest crimes. This sort of thing is just not done anymore. Yet Hostiles was doing it, and after a second encounter with bloodthirsty Indian bad guys in which Blocker and crew stood their ground and picked a few of them off, I was beginning to get excited.

The pro-white messaging of Hostiles went beyond the Indian barbarism on the Quaid homestead, however. Filmmakers know how to you make you dislike a character, and Scott Cooper does not fail in that. When a fancy-dan reporter grills Blocker about his excesses in the Indian Wars, we don’t like him one bit. He’s dressed too fashionably; he has a gold wristwatch on a chain; he’s a little too anxious to help himself to another glass of whiskey. He’s a smug, arrogant cake-eater who thinks he can judge a US Army officer when he’s never fought a day in his life. When staying in an officer’s home early on in their journey, Rosalie and Blocker have to listen to their host’s wife as she regurgitates ignorant platitudes about how the US mistreats the Indians. The woman is dressed like a humorless scold and acts like a humorless scold. Both of these characters are quickly sent packing in the eyes of the audience.

Not only this, but all the white characters up to that point are perfectly sympathetic. You’d need a heart of stone not to be moved by Rosalee’s plight. Without exception, the men are chivalrous and polite to her. Bale’s portrayal of Blocker consists mostly of keeping his mouth shut and acting like he has a toothache. Get that? He may hate redskins, but he sure ain’t happy about it. He’s also best buds with a black corporal named Woodson, an unsubtle hint to the audience that this hatred couldn’t possibly be about race. The colonel back at Fort Berringer did come down hard on Blocker, but he was only doing his job. It was nothing personal. The men Blocker selects for his detail are equally unobjectionable, especially the war-weary Sergeant Metz and the West Point grad, Lieutenant Kidder.

Of course, things begin to turn when the Indian women offer Rosalie a gift after watching her bury her family. Later on, Blocker is instructed to also escort a disgraced American soldier named Wills back to his fort so he can be court-martialed and hanged. His crime? Murdering an entire Indian family with an axe. Why, of course it is! But there were hints that Hostiles would turn into a bloody, white guilt panegyric well before then. The presence of Woodson was one. The other is Yellow Hawk himself. For a cold-blooded thug and killer, he and his photogenic family behave quite impeccably in captivity. Yellow Hawk is played by Wes Studi, who turned in a devilishly fine performance as the evil Magua in The Last of the Mohicians with Daniel Day Lewis back in 1992. This time around, Studi does little more than sit there and cough. The first of many disappointments in Hostiles.

After the whites and Indians get to know each other a little bit and jettison a conveniently-injured Woodson in a Colorado fort, Hostiles then embarks on its let’s-kill-whitey campaign. First, some white fur traders abduct the women. A gunfight ensues. Bad guys get wiped out, but take a good guy along with them. Second, Wills breaks free – like we always knew he would – and goes on a rampage. Gunfight ensues. Bad guy gets wiped out, but not before taking a couple of good guys with him. Only this time, the good guy who kills him, the war-weary Metz, afterwards kills himself. Why? Because of white guilt, of course! He felt that what the whites had done to the Indians was too unforgivable for him to keep on keeping on.

Finally, after Yellow Hawk dies and they bury him in his ancestral homeland in Montana, they meet the landowner and his three armed sons. Said landowner hates Indians so much he ignores the fact that Blocker is an Army captain on official business carrying a letter from the President. Instead, he runs his mouth about his property rights like a good Republican and then pulls out his gun and orders them off his property. And what happens when they refuse? You guessed it. Gunfight ensues. Bad guys get wiped out, but not before killing all of the good guys except for Blocker, Rosalee, and Yellow Hawk’s cute-as-a-button grandson Little Bear. Yes, his name is Little Bear.

This pointless and stupid struggle (couldn’t the landowner have simply moved the body after Blocker and company had moved on?) is then followed by what might be the most hilariously nauseating denouement in all of cinema: Blocker and Rosalee adopt Little Bear and head for Chicago.

Hostiles might not be the most virulently anti-white movie ever made. After all, the first 40 minutes count for something. But if you look at it from a racial perspective, quite a few line items are checked off on that ol’ white genocide bucket list:

Other line items could include:

I propose that from now on, we use the term “hostiles” as a unit to determine how anti-white a film is. So Hostiles gets a score of 6 out of 10 hostiles.

It’s pretty astounding to think that for as much as this film cucks, it still could have cucked a lot more. Sadly, many films these days do.