Skin in the Game:
On the Doxxing of Pamela Geller 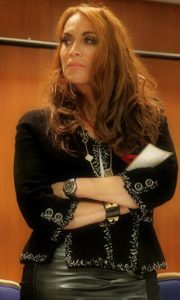 On February 28, 2018, Taylor Lorenz of The Daily Beast revealed the identity of Pamela Geller’s children. And this is troubling for all of us. It certainly was troubling for Milo Yiannopoulos, who speaks about it quite forcefully here.

This might be a reason why some of us who are undeniably on the Right – especially the White Nationalist and identitarian Right – are less than interested in the doxxing of Geller’s family. She’s not one of us. She’s Jewish, she’s an outspoken Israeli patriot, and she once called for Israel to retaliate against a theoretical Iranian nuclear attack by nuking Tehran, Mecca, Medina, and then Europe! This would be revenge for the Holocaust, of course.

This generates more than just a smidgeon of issues for the Dissident Right. On the one hand, she fights tooth and manicured nail against some of the white race’s most committed and loathsome enemies, especially as they invade Europe. Like Ayaan Hirsi Ali and Geert Wilders, she has put herself in harm’s way, offending people who really know how to kill and have done so before. Many on the Right (myself included) admire this and appreciate her tireless efforts. Further, she has a bit more in common with the Right than merely opposing Islam. For example, she did support Donald Trump after he defeated Ted Cruz in the 2016 primary, and does harbor an appreciation for Ayn Rand that I am sure many on the Right would at least somewhat appreciate.

On the other hand, by taking such an Israel-first perspective she has been accused of rattling Muslims only for the sake of her ancestral homeland, thereby causing trouble where there needn’t be any. Both Matt Parrott and Kerry Bolton, writing for Counter-Currents in 2012, took this view. She also has been known to close ranks with her co-religionists whenever some enterprising goy tries to bring up the obvious Jewish culpability for mass immigration into the West. But all this pales in comparison to her willingness to destroy Europe in one fell swoop over things that happened in the first half of the twentieth century. Her perspective not only insults the memory of the millions of white Europeans who suffered and died at the hands of Jews during the same period, but also ignores how Europeans today are so wracked with guilt over the Holocaust that in some places they make denying the Holocaust a criminal offense. Would that the Jews might show the same amount of remorse over their roles in the October Revolution, the Holodomor, and the Gulag Archipelago!