The Crèche Stays:
Thoughts on Roy Moore’s Loss in the Alabama Senate Race 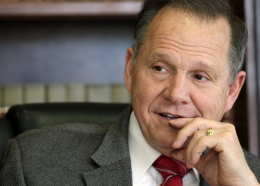 After watching Republican candidate Roy Moore go down to Democrat Doug Jones in the Alabama Senate race on December 12th, I was reminded of an interesting and perhaps overlooked scene from the movie Charlie Wilson’s War.

It’s the late 1970s. Early in the movie, Representative Wilson of Texas (played by Tom Hanks) returns to Washington after an evening of shady deals and debauchery in Las Vegas. As soon as he arrives for work, his secretary tells him that one of his constituents and donors from Nacogdoches, one Larry Liddle, was waiting to see him in his office. Apparently, Liddle is upset that the ACLU is forcing the city to remove a crèche (a Christian nativity scene) which is on public property. Wilson doesn’t seem to take Liddle very seriously and forces him to wait while he hobnobs in the halls and runs off for an unimportant vote. Meanwhile, Liddle is getting steamed in his office as he interacts with the sexy bubbleheads Wilson employs as aides. A twangy country guitar plays on the soundtrack as a cue for the audience to find this funny: an uptight, old fashioned Christian coming to defend his silly religious symbol in the face of all the glorious freedom Wilson so clearly enjoys.

When Wilson finally does arrive, he offers Liddle a drink despite it being 10 am, sweeps the man into his office, and promises to speak with him “for a couple of seconds.” Liddle explains the situation like so:

Every single year since the world was young the fire house in Nacogdoches township has displayed a crèche. Now, the ACLU has filed suit against the township for displaying a religious symbol on public property. It’s Christmas time. It’s a crèche. I can understand if we’re in gosh-darn Scarsdale. But this is east Texas and I want to know who we’re offending except two lawyers from the ACLU.

Full of glib assurance, Wilson describes the problem as “interesting and complicated,” which is a hint to the audience that problem is neither interesting nor complicated. He suggests that Liddle move the crèche to a nearby church. Liddle objects, saying that this is a Christian country founded on Christian values. He generously allows for people of other faiths to worship as they wish, but concludes that if you can’t display a crèche in the fire house in Nacogdoches, Texas, “something has gone terribly wrong.”

Here, Wilson disagrees. And when Liddle suggests that the congressman should use his influence to fix the problem, Wilson tut-tuts him, saying that that would break laws. (This coming from a man under investigation for snorting coke with a bevy of high-priced hookers in Las Vegas.) He then repeats that Liddle can move the crèche to any number of churches, and then blows him off once again to take on more pressing matters. He’d rather protect Muslims in Afghanistan from Soviet aggression than protect Christian interests at home. While the crèche issue never reappears in the movie, it does underline a point made later by Wilson himself, namely that the people he represents in the Texas Second Congressional District are concerned only about trivial matters. This frees Wilson’s up to vote yes a lot. As a result, favors come his way.

Only, this matter is not trivial. By blatantly disregarding the religious freedoms of the Christian majority in east Texas, the ACLU was in fact digging away at the supremacy of Christians in America. And by extension, it was digging away at the supremacy of American whites. Yes, one could characterize this in purely religious and ecological terms. For example, the ACLU, as a church of atheism, is merely competing with other religions in the same way the starling competed with similar bird species when it was introduced to North America in 1890. (The starling, by the way, is a vicious piece of work and soon dominated much of its competition across the eastern seaboard.)

A cute analogy, sure. But my hunch is that there was a racial aspect to it as well given that the ACLU is loath to defend Christian churches (although it will from time to time) while it often defends religions composed mostly of non-whites, namely Islam. It also supports racist policies such as affirmative action which has evolved into a weapon with which non-whites slowly strip freedoms, rights, and influence away from white people. In the late 1970s, a crèche symbolized the identity, values, faith, and traditions of the vast majority of white Americans, and I say that by attacking it, the ACLU was really attacking white people through the proxy of Christianity. That was most likely their intent all along, and it had nothing to do with upholding the Constitution. Here’s the 14th amendment, which affirmative action violates:

No State shall make or enforce any law which shall abridge the privileges or immunities of citizens of the United States; nor shall any State deprive any person of life, liberty, or property without due process of law; not deny to any person within its jurisdiction the equal protection of the laws.

And now that Whites have retreated from public property to church property, as suggested by Congressman Wilson in the movie, what is the ACLU concentrating on now? Why, removing the tax-exempt status of Christian churches, of course! Soon, the only place a white Christian American will be allowed to display a crèche will be on his front lawn where he will have to field hostile complaints from his Bangladeshi and Somali neighbors for not respecting their right not to look at a crèche. It might make them feel “unwelcome,” you see.

I’m sure that the ACLU being largely Jewish, just like the screenwriter (Aaron Sorkin), the director (Mike Nichols), and half the producers of Charlie Wilson’s War (i.e., Gary Goetzman—the other half is the film’s goy star Hanks), is purely a coincidence. Would it be anti-Semitic to say otherwise?

In a recent National Review article, David French outlined all the reasons why no “faithful conservative” should vote for Roy Moore. Many of his reasons illustrate how Roy Moore has resisted the kind of insidious culture-krieg (otherwise known as ‘social progress’) that liberal diaspora Jews and their goy allies have been waging against whites for well over a century now. And this, according to French, is a bad thing:

[I]n 2003, he defied a federal court order requiring him to remove a granite Ten Commandments monument — a monument he’d commissioned — from the Alabama Supreme Court building. The second time, he was suspended without pay after issuing an order to Alabama probate judges declaring that they had a “ministerial duty” not to issue same-sex marriage licenses. He issued this order six months after the U.S. Supreme Court decided, in Obergefell v. Hodges, that the Constitution protected a right to same-sex marriage.

So, in other words, Roy Moore is in the same boat as Larry Liddle in Charlie Wilson’s War. He wants to resist the slow degradation of our culture, and he doesn’t care if agents of this degradation have infiltrated our government and told him to knock it off. He knows what’s right and he’s sticking to it. And if he doesn’t, we all know where this is headed. Homosexual marriage today. Mandatory homosexual indoctrination for straight kids in high schools tomorrow, especially the white ones. It’s not like leftists will simply take their ball and go home as soon as they win a battle such as Obergefell v. Hodges. No, they will keep pushing. When have they not? I’m sure it would have sounded outlandish to Representative Wilson in 1978 to say that the ACLU would go after the tax-exempt status of churches. Well, look what happened.

Here is another thing about Moore that French objects to:

For a man who professes to be a student of the Constitution, he’d happily violate its express terms. In a 2006 op-ed, he wrote that Muslim representative Keith Ellison “cannot swear an oath on the Quran and an allegiance to our Constitution at the same time.”

Moore sees (correctly) that Islam and any nation based on values derived from the Enlightenment such as the United States are purely antithetical. And if one wishes to maintain the majority of the freedoms so cherished in the Constitution one would probably want to limit the political freedoms of worshippers of alien religions that have never respected freedom to begin with and have historically done whatever they could to destroy the freedoms of the people they have conquered (and compare the fates of Zoroastrians in Iran versus in India if you don’t believe me). I guess a nice biological analogy would be injecting a patient with a tiny bit of a disease in order to immunize him against the disease itself. In order to defend against the oppression of Islamification a nation should (in the absence of mass deportation) adopt a tiny bit of the characteristic of the very thing it wants to defend against, namely oppression. Imposing minor limits to the political freedoms of Muslims, therefore, is a healthy measure, and is what Moore is getting at when he wants to prohibit anyone from swearing allegiance to the Constitution using a Koran. By taking a broader historical perspective, Roy Moore finds such a tradeoff to be beneficial. By taking a narrow ahistorical perspective, on the other hand, David French does not even recognize that this tradeoff exists.

Of course, I’m not going to bat for everything Moore has said. I fully recognize that he was far from the ideal candidate. At the same time, however, I do find the charges of sexual misbehavior leveled against him to be spurious. He was also far preferable to the Democratic alternative in Jones. But in all of these cases outlined above, we can at the very least put the Moore loss into a greater context. We could describe Roy Moore as a Christian who wishes to resist the anti-Christian culture-krieg waged by non-Christians in this country, namely by atheists and Muslims. And he will do it extra-legally because he feels that these non-Christians have gained too much influence in government and have perverted the Christian values of the nation’s Founding Fathers. On a deeper level, we can also view him as a white man who identifies strongly with really the only religion the majority of whites have known for the past thousand years. For a long time, up until the mid-1960s, I would wager, the terms ‘white’ and ‘Christian’ were practically synonymous in the West. Further, how often since World War II has the white race actually benefited from social progress? There might be an example or two, but in most cases, social progress as championed by the ACLU and people like David French (i.e., liberal diaspora Jews and their goy allies) means a further erosion of white identity, white pride, and white supremacy in their own homelands. And these forces of progress will not ever stop.

On November 12, 2017 Roy Moore said no to this, and the Alabama voters said no to him (barely). In the future, whites should recognize that the forces of social progress as represented by Doug Jones are not just anti-Christian in nature, they are also anti-white. Such a realization will hopefully prevent a repeat of such a defeat in the future.