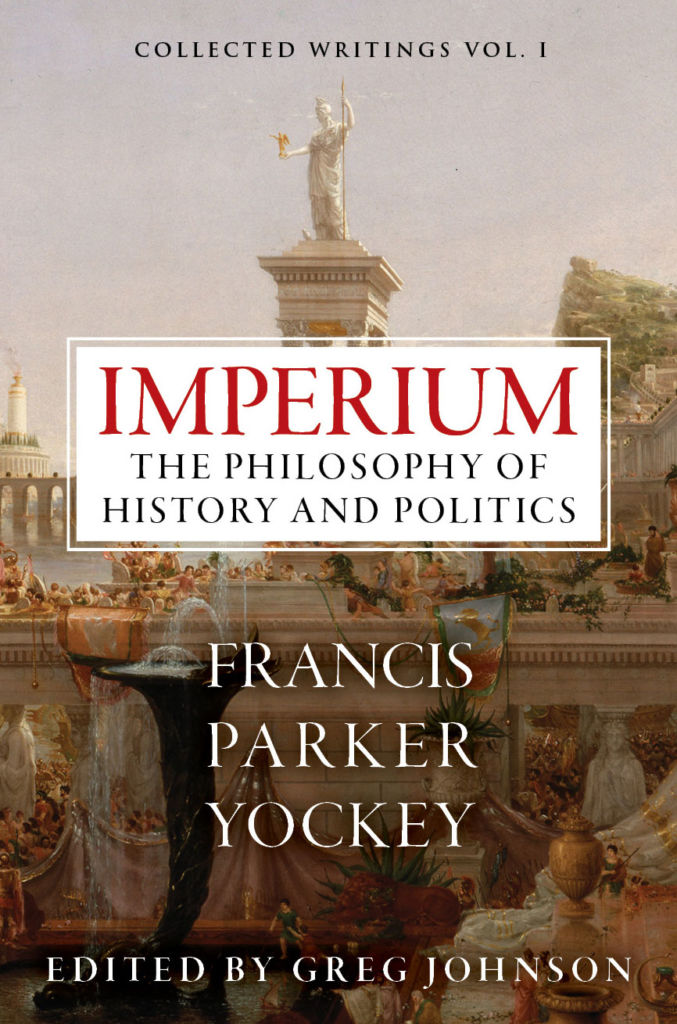 Imperium: The Philosophy of History & Politics

The final volume of the Centennial Edition of Francis Parker Yockey’s Works is Yockey’s magnum opus, Imperium: The Philosophy of History & Politics, which you can pre-order in two formats.  Release date: December 2023.

Note: If you wish to collect all three volumes in the limited edition, and ensure that they all bear the same number, you can order the whole set. The first two volumes, The Enemy of Europe and The World in Flames, are now in print and shipping.

In a blaze of inspiration and without notes, Francis Parker Yockey wrote Imperium: The Philosophy of History and Politics in Brittas Bay, Ireland in the winter and early spring of 1948. Later that year, Imperium was published in two volumes by Westeuropa Press in London under the pen name Ulick Varange. Drawing upon the ideas of Oswald Spengler and Carl Schmitt, and dedicated to “The Hero of the Second World War” (Adolf Hitler), Imperium offers a philosophy of history, culture, and politics, as well as a synoptic overview of Second World War and the post-war world, to argue that the destiny of Western Civilization will be realized only by the creation of a pan-European imperial order. Although reviled by many National Socialists and fascists for its Spenglerian rejection of biological race, Imperium was praised by such luminaries as Julius Evola and Revilo P. Oliver and has exercised a profound influence on the imperialist strand of post-war European identitarianism, including such figures as Jean Thiriart and Guillaume Faye. The Centennial Edition of Imperium is based on the original 1948 edition, reprints Willis Carto’s Introduction to the Noontide Press edition of 1963, extensively annotates Yockey’s text (including his debts to Spengler and Schmitt), and features a detailed Index. The limited-edition hardcover includes an appendix of photographs of Francis Parker Yockey, most of them never before published.

I. THE TWENTIETH-CENTURY HISTORICAL OUTLOOK
Perspective
The Two Aspects of History
The Relativity of History
The Meaning of Facts
The Demise of the Linear View of History
The Structure of History
Pessimism
The Civilization-Crisis
Darwinism
Marxism
Freudianism
The Scientific-Technical World-Outlook
The Imperative of Our Age

II. THE TWENTIETH-CENTURY POLITICAL OUTLOOK
Introduction
The Nature of Politics
The War-Politics Symbiosis
The Laws of Totality and Sovereignty
The Pluralistic State
The Law of Constancy of Inter-Organismic Power
The Law of Constancy of Intra-Organismic Power
The Political Pluriverse
League of Nations
The Inner Aspect of the Law of Sovereignty
Political Organisms and War
The Law of Political Plenum
The Law of Protection and Obedience
Internationale
The Two Political Anthropologies
Liberalism
Democracy
Communism
Association and Dissociation of Forms of Thought and Action

Willis Carto (1926–2015) was an American national populist publisher and political organizer as well as a leading advocate of Francis Parker Yockey’s ideas. Carto visited Yockey in the San Francisco Jail six days before his suicide and published the first widely distributed edition of Imperium (Sausalito, Cal.: Noontide Press, 1963), for which he authored the Introduction which is reprinted here.