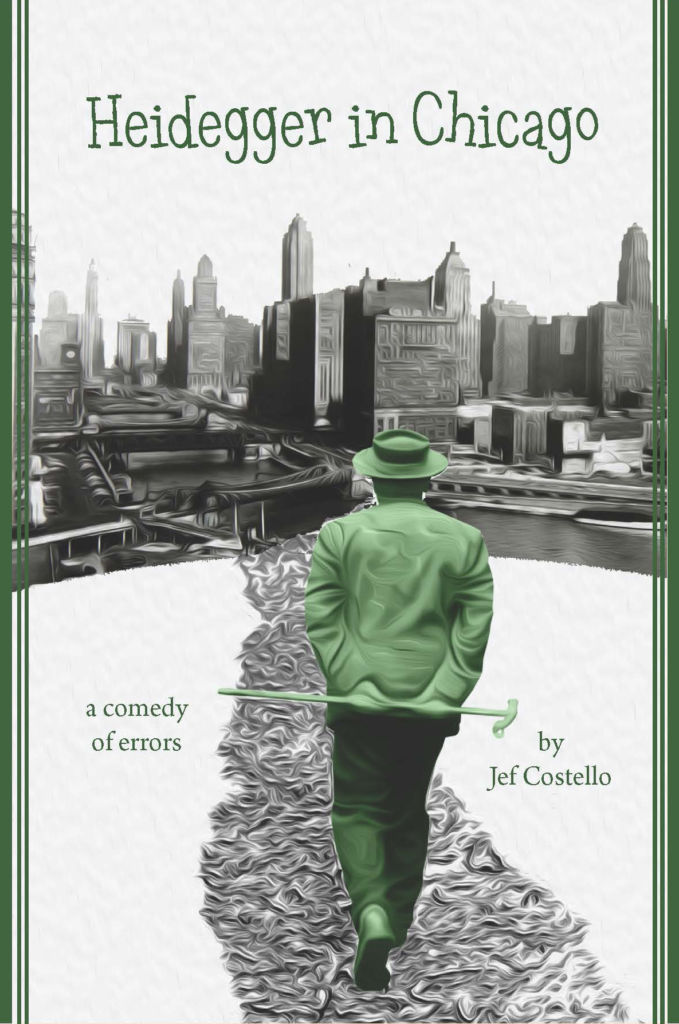 Heidegger in Chicago: A Comedy of Errors

About Heidegger in Chicago

What would have happened if the notoriously obscure German philosopher Martin Heidegger had visited America? Jef Costello’s uproarious comedy of errors Heidegger in Chicago offers a plausible answer: he would have been misunderstood. Costello’s Heidegger makes his way through a surreal and blithely anachronistic landscape populated by washed-up TV actresses, Vegas crooners, PC academics, and cult leaders. He encounters such figures as the Duke and Duchess of Windsor, Savitri Devi, Charles Manson, Yukio Mishima, and J. Edgar Hoover. Along the way, Heidegger is mistaken for a playboy, a Leftist, a Nazi, a nihilist, the “next big thing” in pop, and even a small black child. Heidegger in Chicago offers hilarious sendups of Hollywood, Michael Jackson, Las Vegas, German idealism, political correctness, and Objectivism, with the wickedest Ayn Rand parody ever. You’ll laugh until it hurts—and maybe even learn a little bit about Heidegger.

Praise for Heidegger in Chicago

“Mr. Costello deserves wine and flowers for Heidegger in Chicago, having finally elucidated the mysterious Jackson-Heidegger Conjunction, a delicate topic heretobefore skirted in the work of Jackson biographers. Let me recommend, nay coerce serious-minded readers to invest in plural copies of Mr. Costello’s sober delineation of the development of philosophic inquiry as elaborated both in this country and some other places, a performance that has beyond question found echoes in the canyons of educated New York.”

—Tito Perdue, author of The Node

“Heidegger in Chicago is a rare thing indeed: an ‘intellectual romp’ from an actual intellectual. From Candide to Chance the Gardener, the visitor from another land has been a favorite tool of the satirist. Jef Costello raises the bar by making his not-so-naïve naïf the greatest philosopher of the XXth century: Martin Heidegger. Costello tears into pop fads and social conventions to reveal ‘the things themselves.’ It’s Count Keyserling’s Travel Diary staged as Auntie Mame—but with real wit, not tired camp.”

—James J. O’Meara, author of End of an Era: Mad Men and the Ordeal of Civility

Jef Costello is a writer based in New York City. His many essays and reviews have appeared at North American New Right, the webzine of Counter-Currents Publishing (www.counter-currents.com). He is also the author of The Importance of James Bond & Other Essays (San Francisco: Counter-Currents, forthcoming). His writings have been translated into German, French, Russian, and Swedish.