Confessions of a Reluctant Hater 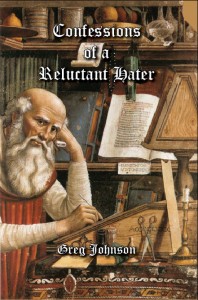 There are three formats for Confessions of a Reluctant Hater:

How to order Confessions of a Reluctant Hater:

About Confessions of a Reluctant Hater:

Greg Johnson’s Confessions of a Reluctant Hater collects 52 short essays, reviews, and opinion pieces that chronicle the author’s discovery of a white worldview and a white voice to defend it. The second edition contains 24 new essays plus an index and is 40% longer than the first.

Greg Johnson discusses multiculturalism, immigration, economic policy, political correctness, the limits of the Republicans and the Tea Party, the 2008, 2010, and 2012 US elections, and books by Christian Lander, Jim Goad, Vox Day, and Malcolm Gladwell.

Greg Johnson is a master of defending radical and uncompromising views with both seductive logic and brutal frankness.

The Wages of Diversity

Turning the World Around

Praise for Confessions of a Reluctant Hater

“Greg Johnson’s work is something rarely seen but badly needed on the so-called New Right. His learning is both wide and deep, but lightly worn. He is not afraid to challenge the orthodoxies of Left and Right. He brings a sensitivity both West Coast and Traditional to the cultural politics of today. The works collected here will, like his website, serve as a foundation for any serious attempt to regain control over our destiny.”

“Greg Johnson is a rare writer, in that he can combine lucid insights with humor and off-the-wall ideas, offering an analysis of contemporary Western man, culture, and society that transcends disciplinary barriers and highlights the subterranean processes that govern the grand panorama of history. This may sound grandiose and esoteric, but the reader need not fear having to push his way through a caliginous jungle of abstruse terminology and turgid, sludge-like argumentation: Johnson’s simple and easy prose makes reading about these weighty matters an effortless task, clearing the decks for the reader to rethink the world.”