Tikkun Olam and Other Poems 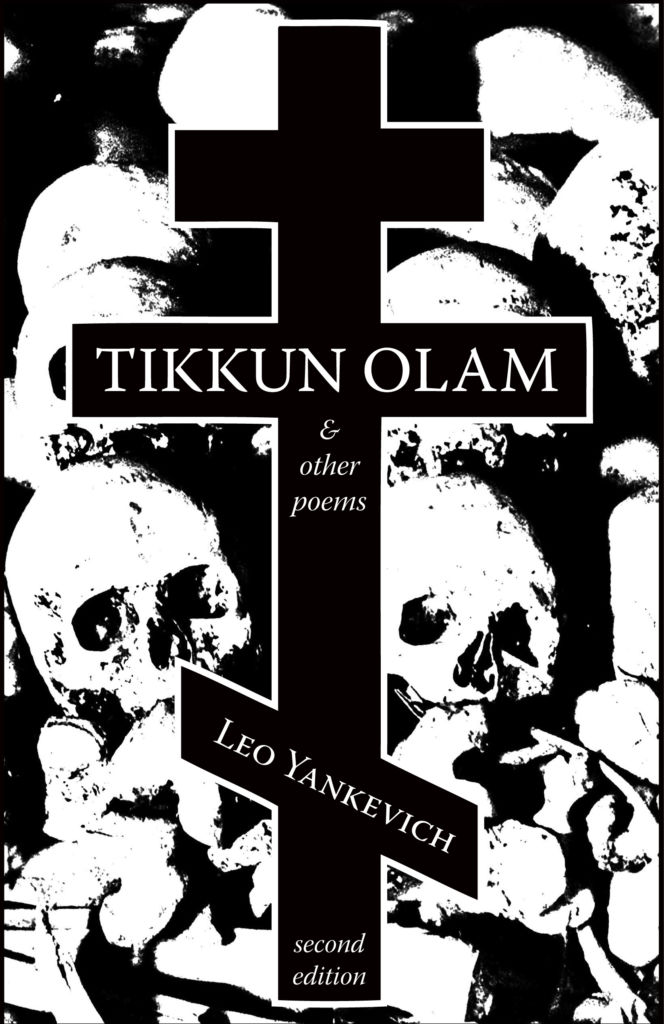 Leo Yankevich is among the greatest living poets in the English-speaking world, and Tikkum Olam is his most important collection of poems to date. Not only does he give voice to the 90 million martyrs to communism stuffed down the memory hole in the last 100 years, but he provides insight into the machinations taking place today that undermine Western man, and unmasks a sobering portent for the future, although not without offering an epilogue of courage and hope.

This expanded second edition of Tikkun Olam and Other Poems comprises 57 poems and one translation. Tikkun Olam was originally published as an E-book only. This is the first print edition.

Leo Yankevich’s Tikkun Olam is both devastating and heroic. The poems devastate with their unflinching depiction of the horror of the last one hundred years—the murders, the political lies, the cultural debasement, the degradation of European identity—and at the same time they are heroic in their open accusation of the force that ultimately lies behind it all: the insidious, self-serving impulse to “mend the world” in accordance with an anti-Western agenda. Yankevich’s book is unsparing in its vividness, but difficult to put down. He bravely directs our gaze at the infection that is killing us, and he does not allow us the comfortable option of turning away in forgetfulness.—Joseph S. Salemi, Editor, Trinacria

“Reading the powerful, ironic poems in Tikkun Olam—Hebrew for “the mending of the world”—in this new enlarged edition, visions of Goya’s Disasters of War come to mind.

“Leo Yankevich wants the truth—wants it out—and uses all his considerable power as a poet to get it out, bitter and bittersweet. “Those who do not know history are doomed to re-live it,” said, I believe, Santayana. Yankevich wants us to know history, so that we need not re-live it. Is this a futile dream? But someone must do something to halt or at least to slow our simian march to doom, and Yankevich does what he can in this dark true book.

“The murderous testosterone-drugged alpha-males portrayed in Tikkun Olam are not utter monsters. They are humans—husbands, sons, and brothers. They are us, or parts of us, and it is their residual humanity that is horrifying.

“This is especially clear when Yankevich takes on infamously unattractive personalities and manages to find in them the germ of humanity that is just alive enough to make stark and painful how much of their humanity has been cast off. His portrait of Rudolf Hess comes to mind. I think, too, of those menders of the world who begin their mending with the murders of the Czar, his wife and children.

“Tikkun Olam is filled with characters—human, all too human, not quite human, alive and suffering in their various tragedies—brought painfully and beautifully to life by Leo Yankevich.”—E. M. Schorb

“Leo Yankevich’s rich formalist poetry sings while it mourns. His poems bring us face to face with powerful and provocative images from more than one of those darkest of modern times–times when a terrible inhumanity was unleashed upon a culture, a folk, a Heimat. In tones both eloquent and raw, it asks of its readers no more and no less than what is regarded as the sacred duty of all those who survive: Remember. Do not let this be forgotten. This too happened. Yankevich, like Percy Shelley and Roy Campbell before him, is a courageously outspoken poet, and one who is destined to be remembered as an important classic long after his politically-correct contemporaries have forever fallen out of popular, and poetic, favor.”—Juleigh Howard-Hobson

Part Seven
52. A Warning to Dissidents
53. Halloween, 2006
54. The Condemned House
55. Understanding the Holocaust
56. Vision
57. Monomatapa on the Detroit River

Leo Yankevich was born into a family of Roman Catholic Irish-Polish immigrants on October 30, 1961. He grew up and attended high school in Farrell, Penn., a small steel town in the Rust Belt of middle America. He then studied History and Polish at Alliance College, Cambridge Springs, PA, receiving a BA in 1984. Later that year he traveled to Poland to begin graduate study at the centuries-old Jagiellonian University in Krakow. A staunch anticommunist, he played an active role in the dissident movement in that country, and was arrested and beaten badly on a few occasions by the communist security forces. After the fall of the Iron Curtain in 1989, he decided to settle permanently in Poland. Since that time he has lived in Gliwice (Gleiwitz), an industrial city in Upper Silesia.