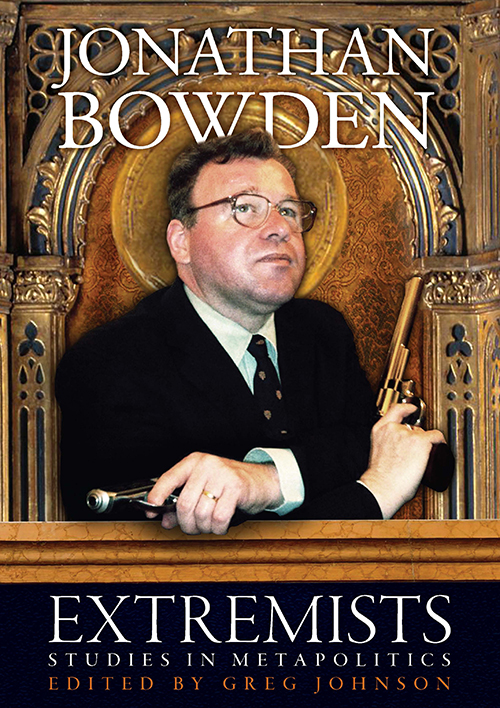 Extremists: Studies in Metapolitics collects transcripts of nine of Jonathan Bowden’s most compelling orations: on Thomas Carlyle, Gabriele D’Annunzio, Charles Maurras, Martin Heidegger, Julius Evola, Savitri Devi, Yukio Mishima, and Maurice Cowling, as well as his speech “Vanguardism: Hope for the Future.” These speeches do not just explore the lives and thoughts of creative and exemplary individuals, they also illustrate three cardinal principles that Bowden repeatedly emphasized: First, political change depends upon metapolitical conditions. Second, cultural and political innovations take place on the extremes. Third, metapolitical extremists must think of themselves as vanguardists who lead the public mind to truth, not cater to illusions and folly.

“Jonathan Bowden died in 2012, just short of his fiftieth birthday. But vanguardist that he was, he continues to lead us today, through his recordings, videos, and books like the one before you, always out there on the extremes, not gone—just gone before.”

—Greg Johnson, from the Editor’s Preface

“Jonathan Bowden was the most inspiring and entertaining speaker to emerge on the British Right in the last half-century. A protean, demi-divine improvisatory power was set free in his oratory and transcended the oft sorely unsatisfactory circumstances of his life. Extremists collects nine of his best orations. Even on the printed page, the power of his voice resonates, drawing us to the words he has left behind.”

“Jonathan Bowden was arguably the greatest orator of his generation. Part of what elevated Jonathan’s oratory was his encyclopedic knowledge of politics, philosophy, history, literature, and the arts, and his ability to verbally regurgitate vast tranches of that knowledge at will—from memory—delivering names, dates, and other details with machine-gun rapidity. Jonathan could speak for an hour and a half without notes, skillfully knitting together one pertinent argument or analysis after another in a logical sequence that would keep his audience spellbound. Another factor that elevated Jonathan’s oratory was his keen sense of the dramatic. He had the rare gift of being able to express heroic sentiments in a way that was inspirational, compelling, and infectious. Strangely, Jonathan always claimed that he never knew what he was going to say until he stood up and opened his mouth. At that moment of truth, he was transformed from a modest and affable intellectual into a bravura performer at the lectern. Although Jonathan’s voice is stilled on the printed page, volumes like Extremists allow us to pause over and ponder his words, to better appreciate and share in the ideas he so urgently wished to communicate.”

“This new collection of Jonathan Bowden’s speeches displays the broad-minded zest for life and infectious enthusiasm for knowledge and for wisdom that would have made him an ideal private tutor to a Prince. There was nothing at all of the pedantic pedagogue about him.  Where others failed—Plato with Dionysius of Syracuse and Seneca with Nero—Bowden I’m sure would have excelled. To describe the man is difficult, so we need a new word: ‘Bowdenesque.’ ‘Bowdenesque: a larger-than-life and warmer-than-life raconteur, conversationalist, and orator with a far-ranging and surprisingly eclectic erudition; a Brahmin with bonhomie; a Falstaff without the failings; an elitist not because he hates the masses, but because he loves them and wants what is best for his people, his culture, and indeed all peoples and cultures; a bon vivant who relishes all the good things in life, but especially culture and company; a calm, self-assured, self-contained cat that is intensely interested in and curious about literally everything and everyone, and eager to listen and learn, and, if requested, teach; a learned intellect with no illusions or limits, who knows the price of nothing, but the potential value of everything and everyone.’”

—Jez Turner, The London Forum, winner of the 2017 Jonathan Bowden Prize for Oratory

Jonathan Bowden (1962–2012) was a British novelist, playwright, essayist, painter, actor, and orator, and a leading thinker and spokesman of the British New Right. He was the author of some forty books—novels, short stories, stage and screen plays, philosophical dialogues and essays, and literary and cultural criticism—including Pulp Fascism: Right-Wing Themes in Comics, Graphic Novels, and Popular Literature, ed. Greg Johnson (Counter-Currents, 2013) and Western Civilization Bites Back, ed. Greg Johnson (Counter-Currents, 2014).