Be the first to review “Forever & Ever” Cancel reply 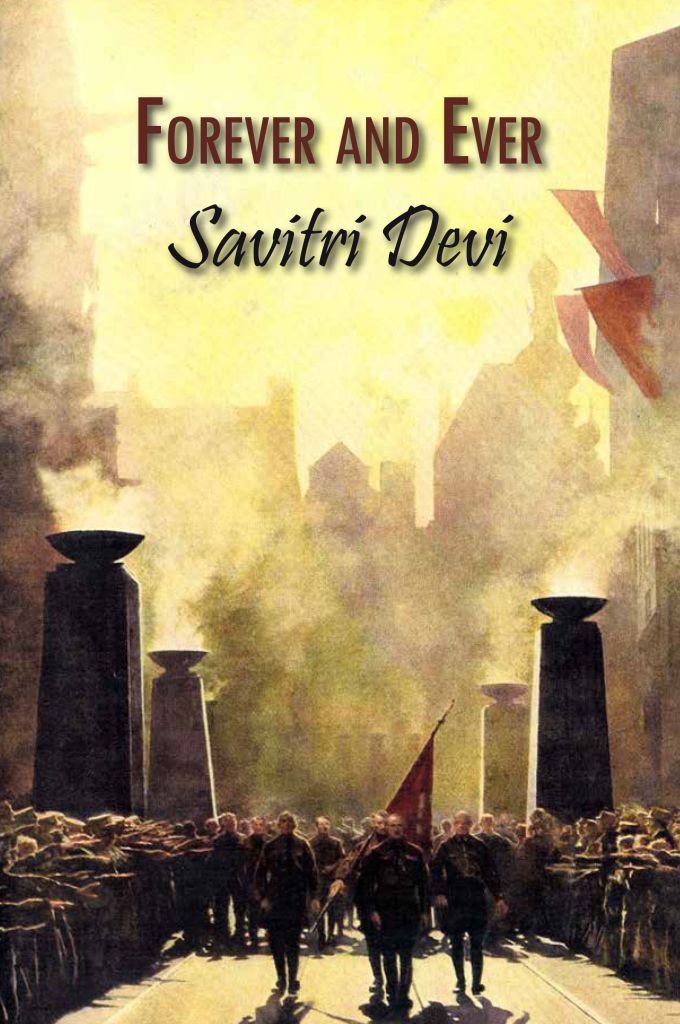 Forever and Ever:
Devotional Poems

Edited with a Preface and an Afterword by R. G. Fowler

Forever and Ever is a collection of devotional poems—hymns of praise and somber elegies—written in 1952 and 1953 and dedicated to Adolf Hitler. The volume also includes an additional poem, “In Memory of May 1st, 1945,” written in 1946 by Clara Sharland, which is probably a pen name of Savitri Devi.

Forever and Ever is one of three books left unpublished when Savitri Devi died in 1982. The manuscript was long thought to be lost. But in 2006, a French friend of Savitri contacted the Savitri Devi Archive with the news that all three volumes were extant. This is the first of Savitri Devi’s long-awaited posthumous works to be published.

Forever and Ever is a handsomely designed, lavishly illustrated volume of 128 pages.

Praise for Forever & Ever

“Savitri Devi’s Forever and Ever is a book of highly charged paeans, laments, and hymns — non-semitic psalms — that belong on the shelf of every awakened and righteous Aryan.”

— Leo Yankevich, author of Tikkun Olam and Other Poems

“Savitri Devi referred to these works as poetry, but they are much more than that. Each of these poems — most of which are in prose — contains an element of pure joyous fervor that can only be considered as a small piece of Savitri Devi herself. Holy. Ecstatic. Heathen paeans made with “words of burning faith.” “Serene even in hell,” as all Our souls should be. Editor R. G. Fowler has brought out an important — and intensely compelling — addition to the Savitri Devi canon.”

— Juleigh Howard-Hobson, author of “I do not belong to the Baader-Meinhof Group” and Other Poems

Part I. Days of Growth

Savitri Devi (1905–1982) is one of the most original and influen­tial National Socialist thinkers of the post-World War II era. Born Maximine Julia Portaz in Lyons, France on 30 September 1905, she was of English, Greek, and Italian ancestry and described her nationality as “Indo-European.” She earned Master’s De­grees in philosophy and chemistry and a Ph.D. in philosophy from the University of Lyons.

A self-described “nationalist of every nation” and an Indo-European pagan revivalist, Savitri Devi em­braced National Socialism in 1929 while in Palestine. In 1935, she traveled to India to experience in Hin­duism the last living Indo-Euro­pean pagan religion. Settling eventu­ally in Calcutta, she worked for the Hindu nationalist movement, married a Bengali Brahmin, the pro-Axis pub­lisher Asit Krishna Mukherji, and spied for the Japanese during World War II.

After World War II, Savitri Devi embarked upon an itinerant, as­cetic life. Her two chief activities were tirelessly witnessing on behalf of National Socialism and caring for homeless and abused animals.

Savitri Devi influenced such leading fig­ures of post-war National Socialism as George Lincoln Rockwell, Colin Jordan, William Pierce, and Miguel Serrano. In 1962, she took part in the Cotswolds camp, where the World Union of National Socialists (WUNS) was formed.