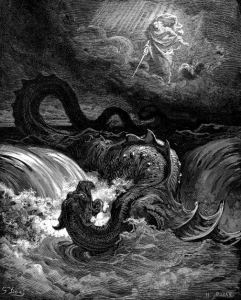 Gustave Doré, The Destruction of Leviathan, 1865.

But yet they that have no science are in better and nobler condition with their natural prudence than men, that by mis-reasoning, or by trusting them that reason wrong, fall upon false and absurd general rules.

“Go in fear of abstractions.” So admonished Ezra Pound [2] aspiring poets. It’s good advice, however, and not just for poets. Think about abstractions. Suddenly it hits you how menacing they have become. Abstractions are what the Leftists and corrupt oligarchs are beating us up with as they go about their projects of dismantling “white privilege” (an abstraction), eliminating “racism [3]” and “homophobia” (abstractions), and praising “diversity [4].” The latter is perhaps most pernicious and abstract of the abstractions we are subjected to by the frenzied social justice warriors in their campaign against the recently invented abstraction of “whiteness [5]”.

Properly used, abstractions are tools of thought that enable us to generalize about our experience — to apply our intelligence beyond our immediate physical boundaries. What we are facing now, however, is the perverted use of them — abstractions treated as things that can be confronted, managed, or manipulated. Consider a particularly egregious example: “the war on terrorism,” the legacy of President George W. Bush, a man whose cognitive limitations and puppetlike usefulness to dark, oligarchic forces are well-established. Terrorism is an abstraction: you cannot kill or destroy an abstraction. You can kill a terrorist. You can destroy a community of terrorists, but you cannot kill or destroy the abstraction, “terrorism,” ever. To announce a “war on terrorism” is to commit, what the language philosopher, Gilbert Ryle, called, “a category mistake.” Terrorism is not the kind of thing that can ever be killed — whether in a war or any other way, the way an insect or a human being can be killed.

I cite here the Bush-Cheney “war on terrorism” because it is the paradigm for the kind of modern “warfare” the ruling class has been conducting for several generations to extend their usurpations of power and control over every facet of our lives.

Modern wars are “wars of abstractions,” inventions of demagogues who promise to “fix” what is unfixable or to achieve what is unachievable. Wars of abstractions have turned into a continuous cycle of orchestrated failure that ravages the “ruled-over” (dead, young soldiers, wasted tax dollars) while concentrating power in the hands of the ruling class (Department of Homeland Security). We are manipulated to embrace and support their wars, and bullied when we resist. The criminal dishonesty of the mandarins who launch them combines with their hubris. With increased power and more of our precious resources, we are encouraged to believe that these wars will enable them to do what they cannot possibly do: make the world into a “democracy”; defeat “poverty”; eliminate “terrorism.” They use that power to insulate themselves from the intrusion of “external reality.” The evidence of their failure arises when the abstractions they are chasing prove to be uncooperative. An abstraction never submits to defeat, no longer threatening us. No one can negotiate with an abstraction and turn it into what it isn’t. American military might and trillions of American dollars have not turned the tribal Middle East into “a democracy.” Those who point this out are scapegoated as heretics and traitors. Modern technical instruments for the dissemination of propaganda concentrate on sniffing them out and manufacturing their guilt. The Big Lie, the manipulation and distortion of information, comes in wave after wave of moralistic bombast to convince people that the world is not what it really is. All “wars” of abstractions are exercises in mass psychosis. They have become endless wars against imaginary enemies to achieve what is unachievable: interminable, rolling waves of collective insanity.

For those with the fortitude and determination to eschew the distortion and dishonesty of the triumphalist historians, the twentieth century is a register of disastrous, modernist wars of abstractions that have carried over into the twenty-first. Consider the history of this rolling wave of wars, the first one that was going to be “the war to end all wars”: World War I rolled in World War II then into the Cold War conducted in Korea and Vietnam, on to the War on Terrorism. And now: the War on the coronavirus. One seemed to follow the other as night follows day.

It thus begins for Americans. On April 2, 1917, President Woodrow Wilson went before a joint session of Congress to seek a Declaration of War against Germany so that the world “be made safe for democracy [6].” Thousands of American men went on to be maimed and slaughtered to advance the abstraction, “democracy,” achieved by eliminating Wilson’s hated abstraction, “autocracy.” This declaration the President used to usurp wartime dictatorial powers. These enabled him to nationalize the economy, demonize German Americans, silence and jail his critics. To make the world more democratic he established the Selective Service System (a euphemism for a state-managed slave system) that threw draft-resisters in prison and conscripted farm kids and laboring men. They were shipped to the trenches in Europe to die achieving a “victory” that gave us the autocrats Lenin, Stalin, and Hitler, and less democracy here at home.

You can buy Stephen Paul Foster’s novel Toward the Bad I Kept on Turning here. [8]

Making the world “safe for democracy” worked out so well for Wilson. Why not a repeat performance with the next modest American demagogue bent on perfecting an imperfect world? On January 6, 1941, Franklin Roosevelt expressed his sincere wish before Congress that four fundamental freedoms [9] he had recently thought about should be enjoyed by people “everywhere in the world”: freedom of speech, of worship, freedom from want, and from fear. How much power, you might wonder, does it take to rid the world of want and fear? When, do you wonder, will this be accomplished? How many martinis had FDR ingested before he was seized by this inspiration?

FDR promised [10] the American people in his 1940 reelection campaign: “Your boys are not going to be sent into any foreign wars.” FDR was conniving secretly with Winston Churchill the entire time in betraying the majority of Americans who didn’t want their sons, brothers, and husbands getting killed to save Europeans from each other — again. His war-partner in making this will-o’-the-wisp freedom nonsense a reality for all the world was “Uncle Joe,” as he affectionately called the USSR General Secretary. Comrade Stalin, as we all know, was deeply committed to the freedoms of speech and worship. This war worked out beautifully for the “freedoms” of East Germans and the Poles, to name a few of its beneficiaries.

Shortly after President Truman handed a big chunk of Europe over for democratization under Stalin, the war against the abstraction “Fascism” then suddenly morphed into the war against the abstraction “Communism.” The communists up until then had been our allies (friends) — now, well, our enemies. This overnight switcheroo might have suggested that getting America into Europe and making that war into WWII was, from the beginning, a con job.

The Cold War was over and Communism was defeated near the end of the twentieth century by Ronald Reagan. The “End of History [11]” was declared by neoconservative Francis Fukuyama [12]. All of this was making our ruling-class guardians awfully nervous — no serious enemies meant no wars, which meant less power — for them.

No problem. When no flesh-and-blood enemies appear on the horizon, you conjure up an abstraction and declare war on it. So, on we sailed into the 21st century. Now the abstractions we mobilize to defeat will never be completely vanquished. Perfect: “Perpetual war to achieve unattainable peace,” as Steve Sailer once said. Has the enemy, “terrorism,” that George W. Bush vowed to crush sued for peace yet? Curious, isn’t it, that those folks who so fervently declared this war have never gotten back to us about an end date or at least an update on “the progress” toward victory? Several years ago Dick Cheney, now in retirement, published a book. The only value of its publication would seem to be the raising of the question: why would anyone take anything Dick Cheney has to say about the world seriously? The title tells you all you need to know: Exceptional: Why the World Needs a Powerful America, a book devoted to the promotion of the insanity conceived a century ago by Woodrow Wilson: making the world safe for democracy.

What the “world needs” is fewer Dick Cheneys.

Which theorists of war might help us better understand what is going on? Forget Carl von Clausewitz. Pogo is the philosopher of the hour: “We have met the enemy and he is us.” “Us” now is Trump-supporting Americans who gathered to protest in the capital last January 6, now classified by law enforcement and security forces as “domestic terrorists.” The Bush-Cheney abstraction of “terrorism,” used initially to divert American minds and their human and material resources to a part of the world that was irrelevant to their interests, has come full circle. Now it’s used to demonize political opposition and punish dissent right here in hometown USA. In case you need more specific features to identify “domestic terrorists,” they are color-coded: “white,” as in “white supremacists” — “supremacist,” yet another mangling of a word to make into a weapon. It’s been turned into an abstract label that is all connotation, conjuring up imagery of imaginary Klansmen and burning crosses. No denotation, no literal, specific meaning it possesses that can be used to distinguish someone who is a “supremacist” from someone who is not. Very handy! “White supremacist” has the same flexibility for our security apparatus as “Kulak” did for Stalin’s NKVD in the 1930s.

On we move to the latest declaration of war on an abstraction by our recently installed chief executive [13],  a lifetime-on-the-government-dole, serial plagiarist, and fantasist with a fifty-year history of manufacturing whoppers for the voting public to swallow. Unlike Wilson, FDR, or GWB, on his first day of office, this President, far advanced in his dotage, declared a war. Right out of the gate, a wartime Presidency with wartime powers. “At a White House event on Thursday afternoon, Biden unveiled a new ‘wartime’ strategy [14] to combat the coronavirus, vowing: ‘Help is on the way’ . . . ‘This is a wartime undertaking,’ he said, as he signed an executive order invoking the Defense Production Act to increase production of personal protective equipment and other resources.”

“Help” for the helpless; the only certainty being that the helpless will remain in that state.

How impervious to history and empirical reality does one have to be not to recognize that this “war” is going to be just like its predecessors? You don’t tamper with success. Like the “war on terrorism,” it will not end. Corona will not surrender and sign a peace treaty. We will enjoy less of our traditional freedoms and experience the exercise of more arbitrary power rationalized as necessary to deal with the manufactured “emergencies.” “Emergency powers” is the orgasmic dream of every politician, from the two-bit ward heeler to a Michigan governor [15] to whoever is pulling the strings on Old White Joe. Many people will have less while a powerful, favored few will enjoy more. And, when Americans get used to forced participation in this war, the new normal [16], another one will be declared.

Go in fear of abstractions. They are multiplying and getting more virulent by the day.

If you want to support Counter-Currents, please send us a donation by going to our Entropy page [17] and selecting “send paid chat.” Entropy allows you to donate any amount from $3 and up. All comments will be read and discussed in the next episode of Counter-Currents Radio, which airs every weekend on DLive [18].

Don’t forget to sign up [19] for the weekly email Counter-Currents Newsletter for exclusive content, offers, and news.