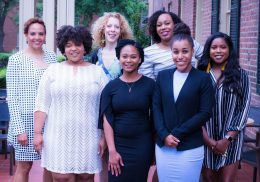 Office of Diversity and Inclusion at the University of North Carolina, Chapel Hill.

“Racism.” “Diversity.” These two words control the way we talk about race in America. That is by design: they are metapolitical words, not words about politics or politicians, rather words that lay down the “no trespassing” moral boundaries of political conversation. The “by design” part of this should be obvious. Those who set the moral boundaries for how we talk about race in America get to control what we say about this, shall we say, sensitive topic. But more importantly, they set what we are not permitted to say with severe penalties for transgression. The control is disguised by the copious use of plural pronouns — “we,” “us,” “our” — pumped up with inspirational hoopla to give a false sense of collective agreement and unity to “our conversations.”

So, onto the specific metapolitical features of “racism” and “diversity.” Let’s consider “racism” to be an instrument of conversational control. With “control” in mind, you cannot help but notice how aggressively the use of the term is policed. The range of its permissible usage is assigned by — are you ready? — skin color, much the way access to public restrooms was restricted during Jim Crow, only in reverse pecking order. There is “racism” at the full disposition of the privileged aggrieved, as compared with a more restricted “whites-only” version.

It helps to think of these control measures in economic terms. “Racism,” understood as collective suffering, becomes a highly-valued commodity. For this commodity-of-suffering, blacks hold a monopoly. And it is a jealously, tightly guarded monopoly. What makes it so valuable is the moral indebtedness it imposes on those responsible for the suffering, the “racists.” “This is what the members of your tribe did to the members of my tribe — you owe us, Big Time! And, we’ll let you know what it will take to get you off the hook — and when that will be.” Not soon, for those of you who might be hoping. Think of the anti-racism movement as a powerful cartel bent on restricting competition in the victimhood marketplace.

The economic analogy also helps explain why in recent years the accusations of “racism” have exploded to the extent that gold-card “racism” has been upgraded to platinum-card “systemic racism.” “Systemic racism” reaches into every crevice and corner of American society — its history, its institutions, its essential core. Even inanimate objects are touched by it — statues, buildings, street signs. “Systemic racism” is evidence of what we might call a “moral national debt,” one we struggle just to pay the interest on. One hundred and fifty years after hundreds of thousands of white people killed each other putting an end to slavery, “reparations” are still on the table, with a long row of zeros on that invoice.

Thus, the policing. Thus, the monopoly. Thus, the debt. Those who insist that black people are capable of “racism” don’t understand how metapolitical lingo works, and they don’t have a handle on moral indebtedness. White people can’t claim possession of this commodity. Because? Because they are so much better off than black people. Because? They are racists, and racists don’t get to complain about “racism.” “Systemic racism” means a moral debt. The debtor and the creditor can’t be the same person.

So, only black people can be victims of racism. Only white people get to be “racists” and handed the tab. Black people are the creditors: white people are the debtors. This relationship resembles something like the old fashioned “company store” — an employee-only store (for whites) that accepts scripts issued by the company (owned by blacks) in advance of periodic cash paychecks. The store gives credit to employees before payday, turning them into perpetual debtors. The company store owns you.

You load 16 tons, what do you get?
Another day older and deeper in debt
St. Peter don’t you call me, ‘cause I can’t go
I owe my soul to the company store.

White people, collectively, are Tennessee Ernie Ford singing this song and owing their souls to the black-owned company store. They pay their scripts in the form of 16 tons of repentance, apologies, and favored, kid-gloves treatment. But what do they get? Another day older and deeper in moral debt.

The other control aspect of “racism” as a metapolitical word is another monopoly feature; “racism” as an explanation for obvious disparities in social-economic status and achievement. Why are blacks poorer than whites? Why are blacks more criminally inclined compared with whites? Why are there so few black computer scientists and physicists? The only permissible answer to questions like this is “white racism.” To suggest that there might be other explanations puts you up against another metapolitical word: “inequality.” “Inequality,” like “racism” is a moral marker. The two words work in tandem in a relationship of reciprocity. Racism leads to inequality: inequality is always the consequence of racism. You can’t have one without the other: they collude to keep the circle of conversation forever closed to other considerations. They hold an unbreakable monopoly on explanations of causality. Attempting to move outside of it makes you . . . “a racist,” putting you in a world of hurt. Remember: metapolitical words are always about control.

Now to “diversity” as an instrument of conversational control. Like “racism,” the “permission” to use “diversity” in conversations of race is allocated differently depending on skin color. The non-metapolitical meaning of “diverse” is “some difference relative to an arbitrarily selected category.” You can have a diversity of options, a diversity of opinions, a diversity of interests. It’s a ho-hum sort of word that in times past no one got worked up about. So much for ordinary language before it got hijacked by folks hellbent on controlling what you say about race in America.

Making sense of “diversity,” as we are now to understand it, is a dumpster dive into the bins of language corruption and degradation. Let’s begin the dive with another analogy that illustrates how much control is the driving force behind this word that requires every institutional leader to genuflect before its utterance — police action. Let’s see how this police action operates in today’s workplace, let’s say a university.

The university’s chief “Diversity Officer,” Dr. LaShawndra Robinson, is meeting with Chairman Professor Chen Li of the mathematics department. (Hint: “officer” in her job of “policing.”)

Dr. Robinson: “Dr. Li, as you know, I am here for our monthly review of your progress in recruiting African Americans for tenured positions in the math department. Your report for last month was not encouraging. I am thinking that you need to ramp up your efforts.”

Note: the math department is under regular “diversity” surveillance. Its chief is held to strict account. These meetings always have the feel of interrogation.

Dr. Li: “Dr. Robinson, the department has implemented its mentoring program. Our senior professors are actively, aggressively recruiting qualified candidates for open positions. We’ve had some success. The problem we are having is competing with other institutions to hire from a limited pool. We are in a bidding war, and we don’t have the funding to compete the way we would like to.”

Note: Dr. Li, while pleading compliance, is attempting a reality check. At the same time, he tries to push his “diversity” failure off on the budget people.

Dr. Robinson: “I refuse to believe that are not enough highly qualified candidates we can successfully compete for. We [she means “you”] just need to be more creative and innovative in your efforts. Please don’t take this the wrong way, but your annual review will take into account the strength of your commitment to diversity. Of course, I know you are deeply committed, but this needs to be reflected in the desired outcome — a truly diverse mathematics department.”

Note: What makes “diverse” “truly diverse”? Hint. Only Dr. Robinson knows, and she ain’t telling. It’s never going to happen under her watch, because she’d be out of a job.

Let’s take a close up look at this “officer’s” interrogation of the “suspect.” The diversity officer with a doctorate in African American Studies has a better grasp of the qualifications for university math professors than the chairman of the math department? Dr. Robinson’s MO closely resembles that of a political commissar in a communist dictatorship. There was one attached to every important office and function with no qualifications other than party membership and a bullying personality. The political commissar “enforces” the Party’s directives which bend stubborn reality into strict compliance with ideological phantasy. Commissar Robinson is less than subtly reminding Professor Li that mathematics is a lower priority than “diversity,” and that hiring a less qualified black mathematics teacher than, say, an Asian one, is what he must do — if he is to attain “diversity,” and if he wants a satisfactory annual review.

Everyone knows that “diversity” a euphemism for “more blacks needed.” What “diversity” doesn’t mean is diversity. A ninety percent black math department would be “diverse” the way the currently ninety percent black NBA is diverse. No “diversity officers” would be threatening anyone over this non-diverse outcome, just as you hear no one complaining about the lack of “diversity” in the NBA. Thus, the Orwellian “war is peace” mire into which we are plunged by having to submit to the policing actions of the diversity commissars.

“Racism” and “diversity” are about control. Those who accept them into their daily vocabulary and use them as “assigned” are following orders.

If you don’t like following orders, reject them “as assigned.” Then prepare to be punished.