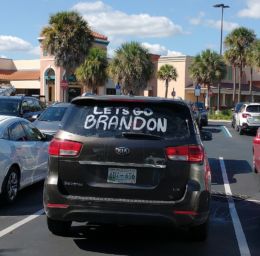 I can already hear the groans emanating from the peanut gallery. “But Trav,” you say. “This is Counter-Currents, the caviar of White Nationalist websites. We don’t come here to read about normie stuff.”

Last year, I wrote about underground anti-anti-white YouTube rapper, Tom MacDonald [2], after he hit number one on the iTunes charts. I cannot tell you how much grief I got from people for writing that article. “Why are you promoting some wigger? Rap is degenerate! Kids should be listening to classical music!”

I’ll have you know that Tom MacDonald is now about three times as popular as he was when I wrote that article. He is now huge among MAGA normies. I see Gen X normiecon friends post his videos on social media all the time. His songs have also broken into the Billboard charts — not the iTunes charts, but the Billboard Hot 100. He is now a serious cultural force, and even has a Wikipedia entry [3].

Tom MacDonald’s influence will become relevant later on in this story. Look, ol’ Trav knows what he’s doing. If we are going to convert the masses, it is helpful to know what they are talking about, what they are watching, who they are listening to, what those people are saying, and how the normies are responding to it. I’m trying to make you guys better activists. So stop complaining and eat your vegetables.

There’s a meme going around that has become a cultural phenomenon among normiecons: “Let’s Go, Brandon.” The phrase has become the biggest and fastest growing normiecon meme since “fake news” caught fire five years ago.

American readers are probably already aware of it, but some in our international audience might not be, so I’ll start with the origin of the meme.

There has been a trend at live sports events in recent months in the US where crowds will spontaneously break out into chants of “Fuck Joe Biden.” The fandoms of some sports are whiter and more conservative than others, but the National Association for Stock Car Auto Racing (NASCAR) is probably in the lead in terms of whiteness and conservatism.

In early October, there was a NASCAR race in which driver Brandon Brown finished victorious. During the televised post-race roundup, the “Fuck Joe Biden” chant from the crowd was audible. The female newscaster then mischaracterized the chant, claiming that the audience was in fact chanting “Let’s go, Brandon.”

Video of the incident went viral, and “Let’s go, Brandon” has become an ironic catchphrase among normiecons. Over the last month, the meme has just kept going and going. If you search for “Let’s go, Brandon” on YouTube today, you will find a slew of songs with that title, analysis of the meme, videos of liberals losing their minds in response to it, and conservatives laughing at liberals who lose their minds over the phrase. “Let’s go, Brandon” t-shirts, coffee mugs, and bumper stickers are selling like hotcakes.

Not one, but two rappers have reached number one on the iTunes charts with songs titled “Let’s go, Brandon.” The first was Loza Alexander, who, after going viral on TikTok, hit number one on the hip-hop iTunes chart and number two overall. His song was popular enough to break into the Billboard Hot 100 and reach number 38. The other rapper was America First associate and Nick Fuentes’ token black friend Bryson Gray. Bryson hit number one on iTunes and reached number 28 on the Billboard Top 100. As recently as October 27, there were four songs entitled “Let’s go, Brandon” in the iTunes Top 10 at number one, two, four, and eight.

Here’s where you can see Tom MacDonald’s influence. MacDonald appears to have blazed a trail that others are now following. Before MacDonald, having that kind of chart success in which you are outselling major label artists with Right-wing music was unthinkable. Now you have multiple artists doing it at the same time. MacDonald built up a serious audience for his particular brand of conservative rap, and that makes it easier for other conservative musicians to market themselves because they can appeal to MacDonald fans.

You can buy Greg Johnson’s The Year America Died here. [5]

If you wanna be a curmudgeon, you can do the “rap is degenerate” thing or complain that these songs are all shallow normiecon fluff. While it might be tame and cringe now, it appears that some sort of online infrastructure for an independent Right-wing music scene is developing which may open doors for other, more “based” artists later on. Early rap and early metal were both very tame compared to what came along just a few years later.

If we are to win the culture war, it helps to actually produce culture. Give people something to entertain themselves with. Sure, I would prefer to live in a world where rap did not exist, but it does and it’s not going away. As long as it’s here and there’s a demand for it, I would rather people listen to Tom MacDonald than Cardi B.

Another thing worth noting is that none of these guys appear to be astroturfed. All them are independent and going viral organically. Perhaps Conservatism Inc. will try to co-opt this scene. Maybe some donors will step in and start flashing money at these guys. Maybe Charlie Kirk will set up TPUSA Records or something. I hope that doesn’t happen, but we’ll see.

The funny thing about “Let’s go, Brandon” is that it is very Alt Right-ish in the way it works. It is a seemingly innocent phrase that is an avatar for something darker. On the surface, Pepe was just a cute and innocuous cartoon frog, but was in fact a symbol for a movement that discussed the Jewish Question and scientific racism. Our enemies understood that, and it was hilarious watching them try to explain why such an innocent image was in fact a symbol of evil.

In that sense, “Let’s go, Brandon” has become the normiecon’s Pepe the Frog. On the surface it appears to be a playful show of support, when it is in fact a coded insult. Maybe the normie has not yet begun to hate, but he appears to have discovered irony.

Liberals are now alarmed by this phrase, and perhaps they should be. It not only disparages Joe Biden but also ridicules the media, and indeed the whole system around them. Everyone knew that the media lies before, but this latest incident has revealed a lot about them. First of all, the purpose of the newscaster’s lie was to cover up dissent against the regime. Secondly, the lie was almost the exact opposite of the truth — she got all three words wrong. Third, it was such a ridiculous lie. She was insulting your intelligence. So now, every time the phrase is repeated, it is a reminder that we are ruled by liars.

The Left has begun a counter-offensive, and it is even stupider and more insulting to your intelligence than the original newscast. The angle they are running with is that the phrase promotes vulgarity. 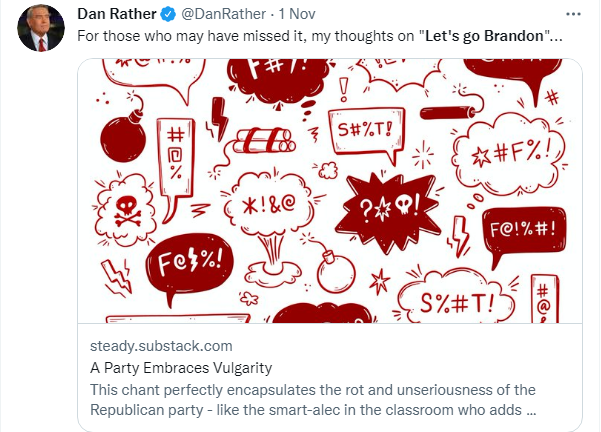 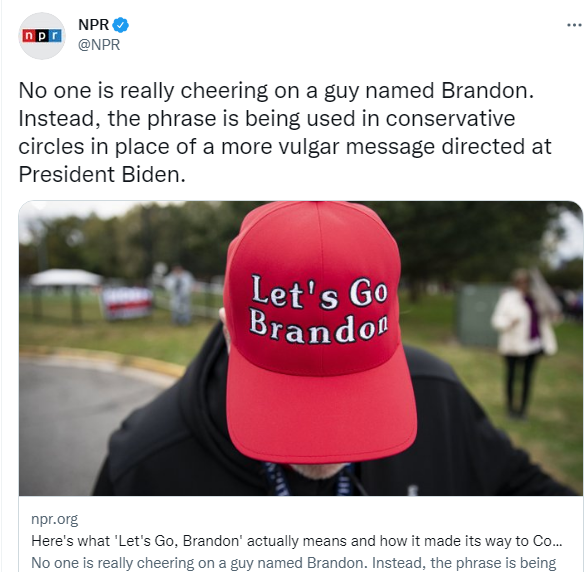 The real absurdity of the liberal response is that no one believes they actually mean it. Nevertheless, there is a grain of truth in their criticism. I think that the normalization of profanity has done a lot of social harm.

I’m not a prude, but I believe they should be used strategically and only for dramatic effect. Sometimes “fuck” really is the mot juste. Some people swear almost as a nervous tic, however, and it is a big pet peeve of mine.

Nevertheless, the ship of profanity being something only for adults sailed with cable television. Whereas before you had to be a grown-up to see a movie with dirty words in it, once cable TV and video became commonplace, kids could watch R-rated movies at home. I grew up watching The Bad News Bears, which was a kid’s film that featured a character named Tanner. He was a short kid who spoke entirely in profanity. He was funny because he had no sense of etiquette.

I’m not really bothered by profanity so much as the erosion of all sense of etiquette in relation to it. The Sex Pistols broke the brains of a nation when they said the f-word on live TV in 1976. As recently as the late ‘80s, Andrew Dice Clay was banned for life from MTV for using profanity during their music awards. None of them were saying anything that people hadn’t heard before, of course; it was the gross breach of social protocol that was the scandal. But by the mid-‘90s, Bobby Brown was able to drop an f-bomb at the MTV music awards without consequence.

Sure, “Let’s go, Brandon” is code for a dirty word. But then again, so are a lot of other words. “Heck” is code for “hell.” “Crap” is code for “shit.” I remember when people used to say “Oh, fudge” instead of “Oh, fuck.” And I’m not even going to tell you what “fiddlesticks” means. But by Dan Rather’s logic, saying “Oh, fudge” is no different from saying the real thing.

“Let’s go, Brandon.” It’s already a dead horse, but at the time of writing, it shows no sign of slowing down. Maybe it is a bit shallow. It doesn’t have the multi-layered quality of “It’s OK to be white” or “Islam is right about women,” but it appears to be good for morale, and it’s not counter-productive in any way.