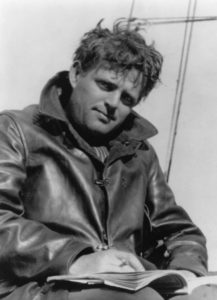 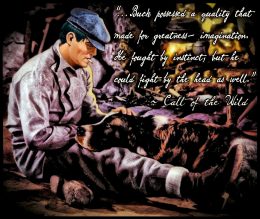 Jack London was born John Griffith Chaney in San Francisco on January 12, 1876. An adventurer and Jack of all trades in his youth, London achieved fame and fortune as a fiction writer and journalist. But he never forgot his working-class roots and remained a life-long advocate of workers’ rights, unionism, and revolutionary socialism. (See his essay “What Life Means to Me [3].”)

But Jack London was no ordinary Leftist, for he was acutely racially conscious (see, for example, “The Yellow Peril [4]“) and had such a marked Nietzschean/Social Darwinist ethical sensibility that Ragnar Redbeard’s infamous Might is Right or The Survival of the Fittest [5] was widely, though mistakenly, attributed to him. Thus London is also a favorite writer of New Rightists and White Nationalists, particularly West Coast White Nationalists and those who hope for the re-emergence of a racially conscious Left. 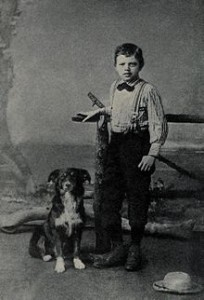 London’s best-known books are Call of the Wild and White Fang, drawing upon his experiences in the Klondike Gold Rush; The Sea-Wolf, a psychological thriller and portrait of a brutal sea captain; and The Iron Heel, a dystopian novel about oligarchy and revolutionary socialism which became one of the literary inspirations of William Pierce’s The Turner Diaries.

The Library of America has published two handsome hardcover volumes of London’s principal works: Novels and Stories: Call of the Wild, White Fang, The Sea-Wolf, Klondike and Other Stories and Novels and Social Writings: The People of the Abyss, The Road, The Iron Heel, Martin Eden, John Barleycorn. The Portable Jack London is a well-chosen single-volume paperback selection of his writings. James L. Haley’s recent biography Wolf: The Lives of Jack London is a true tale as exciting as London’s best fiction. The best online resource on Jack London is The World of Jack London [7], which contains virtually all of his writings plus invaluable secondary literature.