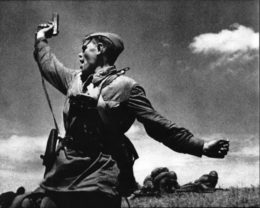 Ever since I got involved with White Nationalism, I have been hearing the same speech. I call it the “Tough Talk,” which is invariably delivered by a “Hard Man” (usually borrowing his language and persona from the military and/or football).

The gist of the “Tough Talk” is twofold.

First, whites are never going to regain control of our destiny simply by talk; we will have to use violence. A related claim is that we can’t win simply by producing online content. We have to take the struggle to the real world.

Second, since violence is inevitable, the time for talk is over. No more effete intellectualism. No more virtual activism. We need to get out in the real world right now. We need to get some tough guys together, preferably with police and military experience, and start killing people. Or maybe we can just go it alone, Hunter-style.

Of course the “Tough Talk” is itself talk, not action, and it is not delivered in the real world, but on the internet. Responses fall into two categories. First, there are the “Attaboys” and “Fuck yeahs!” — also typed on a keyboard. Second, there are the people who have reservations, including those who wonder if these tough guys are agents provocateurs (some surely are) and those who think their conclusions don’t quite follow.

Generally, I ban tough talkers from commenting at Counter-Currents and ignore them elsewhere on the web. Engaging them only gives them unearned readership and credibility. Besides, eventually they just fall silent. Some of them are drunks and depressives on a downward slide. Some of them become burnt out and embittered. A few, like the loathsome Glenn Miller [3], go on killing sprees. And some of them might even grow out of it. It is hard to know which ones go which way, because they are pretty much all anonymously typing their verbal bile into the cybervoid.

But for the record, here are my reservations.

First, literally nobody believes that whites will regain control of our destiny without the use of force. After all, White Nationalists want political power. We want to create a new pro-white legal and social order. And every law is accompanied by the threat of force. So the use of force is self-evident implication of every political program, and to suggest that one’s opponents are unaware of this is to erect a straw man.

The question is not whether we will use force after we gain power, but whether we will have to use force in order to gain power in the first place. Can we gain power through the existing political systems, or will we have to overthrow them in violent revolutions and coups, or will it be a little bit of both? The answer will obviously depend upon circumstances that vary from time to time and place to place. It is perfectly conceivable that White Nationalists can come to power in democratic systems. But if a system does not allow a peaceful and democratic transfer of power, then violence is inevitable.

Second, if the real question is not whether we will use force, but when and how, this brings us to the second issue. There’s a rather great leap from the premise that politics by its nature involves force to the idea that now is the time to stop talking and start fighting, especially fighting in the way that the tough talkers imagine, namely forming guerrilla bands or terrorist cells, or simply going on shooting sprees.

Only fools pick fights they cannot win, and White Nationalists cannot win a war against the armies, police forces, or even the mall cops of any contemporary society. So under the present circumstances, armed struggle is stupid.

So the tough talkers want us to abandon our best weapons and attack the enemy where he is strongest. This only hurts whites and helps anti-whites. If people like this did not already exist, the enemy would simply create them.

Our enemies are so keen on shaping public opinion because they know that public opinion is the foundation of political power. So if we want to change the political system, we have to change people’s values and beliefs. Metapolitics comes before politics, because we have to change people’s worldviews before we can change the political order. So it has never been a better time for metapolitics, or a worse time for violent action. And of course, the “Tough Talk” on the internet is itself a form of metapolitics, just a stupid and ineffective one.

When somebody launches into a version of the “Tough Talk” on the internet, he is imagining himself in the real world giving a rousing speech to soldiers before a battle or athletes before a match. But if he actually delivered his speech to his friends and neighbors, they would regard him as stupid, crazy, or evil. Why?

Because a speech is only intelligible to people who share a common set of beliefs. A course of action only seems moral if one’s audience shares one’s values. And today, our people’s beliefs and values have been provided by the Left, who have set us on the road to cultural decadence and racial extinction.

In order for the “Tough Talk” to be intelligible to the general public, they need to be reeducated. In order for White Nationalism to seem moral, we must change people’s values. And if violent insurrection is not going to be crushed by society, most people need to think that it is moral. But, then again, if most people think our cause is just, we probably will not need to resort to revolution.

Now, to be crystal clear, I am not opposed to Tough Talk or Hard Men as such. Like I said, every political order requires the use of force, and sometimes we will have to use force to capture political power. Someday, white leaders will have to rally the masses with Tough Talk to crush their enemies and defend their interests. The ongoing Muslim invasion of Europe will make that day come sooner than I ever imagined. But Tough Talk is only useful if people have ears to hear. The purpose of metapolitics is to make whites receptive to the message that taking our own side in a battle to the death is the right thing to do.

We’re not there yet, but signs are encouraging. Our leaders have never been more corrupt, decadent, and out of touch with what’s true and good. Our movement, by contrast, is on the side of truth and justice, and we are attracting highly intelligent and righteous individuals. They are in decline. We are on the ascent. When those two trajectories cross, a new order will be born.

Since the beginning of the migrant crisis last year, Counter-Currents’ traffic has increased enormously. More of our people are listening than ever before. So we have to get our message to them. I have to get more articles, more podcasts, more videos, more translations, and more books out there. I need to travel more, network more, and bring more people together. But I can’t do it without your help.

2016 is off to a strong start, but we need your help to maintain momentum. Counter-Currents reached 1,244,485 unique visitors in 2015, but we had only 331 unique donors keeping the whole thing afloat. Yes, I know, the great thing about the internet is all the free content. But consuming free content means being a free rider on other people’s generosity. This year, one of my resolutions is to convert more free riders to donors and book buyers.

Recurring donations are particularly helpful, since they allow us better to predict and plan for the future. We have several levels for recurring donations. Please visit our Donations [4] page for more information.