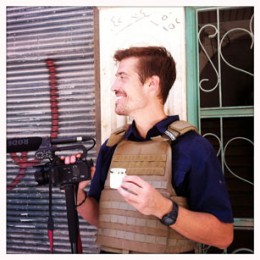 My initial reaction to the beheading of American journalist James Foley by Islamic militants was horror and outrage. But then I learned more about Foley’s work, and my feelings changed. As Gregory Hood writes [3]:

[Foley] had a specific agenda with his work–he was trying to expose the “atrocities” of the Assad regime [4] and support the “democracy” movement. Foley may have been a freelancer, but his worldview was eminently predictable [5] and pro-Establishment–trying to break down questions of race, religion, and identity into a game of good egalitarian democrats versus bad reactionaries.

It is a pity that more propagandists don’t die. It might encourage more responsible reporting. And, as with all wars, it is a pity that the foot soldiers not the generals take the brunt of the blowback. Because we might live in a better world if the warmongers get a taste [6] of the terror, destruction, and death they inflict on others.

When William Pierce asked “Who Rules America? [7]” his answer was not the president, congress, and judiciary, but the owners of the news and entertainment media. Because the media shape the consciousness and values of the public, they can raise up or cast down any political leader. The media promulgate the ruling orthodoxy, drum up hysteria for its witch hunts and crusades, and expose and destroy dissenters. They are not neutral or innocent or merely exercising “freedom of speech” (which they actively deny to dissenters).

It might even give them second thoughts about serving as foot soldiers in the war on whites [8] here in America.