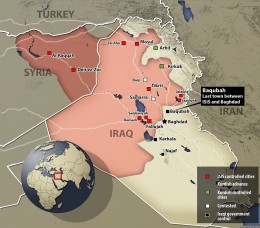 For White Nationalists, the unfolding debacle in Iraq certainly proves the old German adage, “Schadenfreude ist die schönste Freude.” For we were right about pretty much everything, and we told them so.

Saddam’s Iraq was no threat to the US. Under Saddam, Al-Qaeda did not exist in Iraq. Today, an Al-Qaeda offshoot controls one third of the country. The US war on Iraq was based on lies cooked up and propagated by Jews and their tools to trick the US into spending more than 2 trillion dollars and countless lives destroying one of Israel’s enemies.

The idea of democratizing Iraq was folly, since Iraqis are not a nation, but merely a patchwork of tribes divided by religion (Sunni, Shia, Christian) and ethnicity (Kurds, Arabs, Turkmen). Such a society can only be held together by a dictator, and due to Iraq’s low-trust, nepotistic culture, such dictatorships inevitably turn into the imperial rule of the dictator’s tribe and religious group over the rest of the country. This is true of Saddam Hussein’s regime, and it is true of the “democratic” regime of Shi’ite-chauvinist Nouri al-Maliki.

Iraq is a test case in the failure of ethnic and religious diversity in one state. All multiculturalist, pacifist, one-world, cosmopolitan, and imperialist ventures lead to hatred and bloodshed. Thus the only realistic basis for peace and human brotherhood — to the limited extent they are even possible — is ethnonationalism: the creation of homogeneous societies for all peoples on ethnic, cultural, and religious (since Islam is an inherently political religion) lines.

Thus the best outcome for Iraq is partition: the Kurds deserve their own state in the north, and the Arab lands need to be partitioned between the Sunni and Shia. (Other ethnic and religious groups are too small to hope for anything but tolerance.) This partition could have come about in an orderly, peaceful, and humane fashion if the world were run on ethnonationalist principles. But this world is run by evil and foolish men, so partition will be accomplished instead though chaos, war, and unspeakable cruelty. But the partition will come. (ISIS will probably stall, and the Shi’ite army will probably rally, when the battle reaches Shi’ite areas.)

Of course the fools in Washington don’t get it. For instance, Hillary Clinton, who is apparently running for president of Iraq, piously explained that Maliki and the Shi’ite majority should strive to be more inclusive of minorities. Because white Americans all know that unreciprocated gestures of good will to resentful minorities are the key to building utopia.

ISIS also proves another point that White Nationalists are right about, namely that history is still full of surprises [5]. Not even in my most cynical dreams did I expect to wake up and find that one third of Iraq was in the hands of an al-Qaeda offshoot — and that every friend of the United States in that region had a bullet in his head, or no head at all — and that this was the work of a vast, well-organized, and well-funded organization that I, and most of the world, had never heard of 8 hours earlier.

Now, of course, we are inundated with information about ISIS, including a great deal of alleged intelligence about its funding, which we are told is entirely indigenous and has nothing to do with state sponsorship.

I’m not buying it. ISIS obviously enjoys state sponsorship, probably from Saudi Arabia and Qatar, and probably from the United States as well, since our policy has been to suppress al-Qaeda types in Iraq and support al-Qaeda types in Syria, on the dubious assumption that none of our aid would cross the wholly arbitrary and porous border between the two countries.

This should throw some light on the surprising voices against US intervention on the Right, for instance from David Frum and Glenn Beck. Of course the loudest voice against US intervention has been Israel, since the emergence of ISIS creates a common interest between the US and Iran, which is the main ally of Iraq’s Shi’ite government. Israel, of course, wishes for the United States to destroy Iran, so the last thing it wants is any kind of co-operation between the two countries in Iraq.

However, if the US stays out of Iraq, Iran will almost certainly go in, which might allow Jews to engineer a war between the US and Iran down the line. The Saudis would also be screaming for US intervention in such a scenario. After all, it is easy to sell Americans on memes like, “We can’t allow Iran to control Iraq’s oil,” just like we could not allow Saddam to control Kuwait’s oil way back when.

The natural inclination of every American White Nationalist is to look at the present crisis and decide on a course of action based on US interests, as if this were a serious country. As if this were our country. In which case, the right policy is to do nothing. Which was the right course more than ten years ago, when this country was swindled into the last Iraq war.

But at some point, it should dawn on us that America is no longer a serious country. It is certainly no longer our country. Instead, it is just a tool of international Jewry and international capital — a monster that brings misery to our people and the rest of the planet. Thus any policies that are good for America are bad for the white race and the world at large. This is definitely a case of “worse is better [6].” A third Iraq War might just finish this country. And if America is headed down that road, white Americans should be the last ones trying to save it.