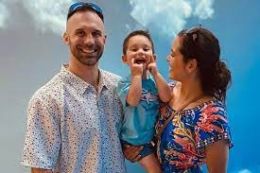 In late January 2022, a white born-again Christian and former bodybuilder named Thomas Hand was murdered by a 17-year-old black thug in one of the rougher parts of Montgomery, Alabama. According to the Daily Mail [2], he used to preach the word of God in low-income parts of Alabama every Saturday with his pregnant wife Christine and his young son, Roman. This altruistic routine was cut short when someone the Daily Mail calls “a mumbling man” walked up to Hand, and for no apparent reason at all, shot him dead.

Why does this sort of thing keep happening? When are white people going to realize that it is a suicidally bad idea to attempt to rescue sub-Saharan Africans from their own psychoses and limitations? These are proto-humans who, on average, have lower IQs and poorer impulse control. This makes them dangerous and best avoided.

In our society today, where whites lavish blacks with charity and indulgence at every opportunity — even to the point of racially discriminating in their favor — it’s never been easier for blacks to succeed. The ones who can, invariably do. The ones who cannot, most likely never will. The poverty rate, the unemployment rate, the drug addiction rate, the murder rate, and the crime rate of these people (past and present) only validate [3]s such an ugly and hidebound statement. In that milieu, someone is nearly as likely to commit a crime as to say hello.

And no amount of God is going to change that.

I know this because there are many precedents for what happened to Thomas Hand. I learned of one when reading Robert Ruark’s great African novel Uhuru [4]. The story takes place on the eve of black independence, several years after the bloody Mau Mau rebellion in Kenya. In it, an experienced and very race-realist safari guide instructs a naïve American woman about blacks’ irredeemable violence. He does so by showing her a pair of magazine clippings, the first being a eulogy for 63-year-old Arundel Gray Leakey, a white Christian farmer who was murdered by the very people he had attempted to aid. Despite appearing in a novel, this horrific act did indeed happen.

In 1954, the Mau Mau had killed or wounded nearly 1,000 European or African soldiers after two years of rebellion, twice as many members of the loyal Kikuyu tribe, and 27 innocent white settlers. In retaliation, the British military had killed 6,741 Mau Mau fighters and captured almost twice as many. In the midst of this bloodshed fell Leakey’s little-remembered story. Leakey had been accepted among the Kikuyu as a “blood brother” and spoke their language fluently. He worked with them and strived for their welfare. So much did he trust them that he never carried a gun in their presence.

One evening, while dining with his wife and step-daughter in his farmhouse, located 100 miles north of Nairobi, 30 armed black terrorists broke in. His wife managed to tuck their daughter away in the attic through a trap door, but she herself was not so lucky. The blacks slashed her with knives and then strangled her to death. Leakey, who was a diabetic and could not live long without medication, was then marched to a secret location where the blacks forced him to take an oath ceremony and then buried him alive. This was a sacrifice to the Kikuyu gods. A witch-doctor had apparently ordered the sacrifice, claiming that a white man’s death would bring victory to the Mau Mau. Later, they found some of Mrs. Leakey’s jewelry on a girl who was with this heinous act’s perpetrator when he was finally captured.

Any internet search will turn up pages and pages of information on Emmett Till, Stephen Lawrence, and other celebrated victims of white-on-black murder, but almost nothing on Arundel Gray Leakey [7] — and ultimately, I predict, just as little on Thomas Hand. In these two cases, you had a truly innocent and altruistic white who was brutally murdered by a black (or blacks, as in the case of Leakey). Further, in pursuing their altruistic goals, both whites sought out blacks, trusted them, and attempted to make life better for them.

I bring this example up to demonstrate how thousands of miles and nearly seven decades really mean nothing when it comes to well-meaning whites being murdered by not-so-well-meaning blacks. This site [8] recounts, quite vividly, how Rhodesian blacks murdered 38 white, Christian missionaries of various denominations between 1976 and 1978.

What follows is reporting by the Sunday Mail on what came to be known as the Elim Mission Massacre of June 1978:

Eight British missionaries and four young children — including a three-week-old baby — were bayoneted to death by terrorists on Rhodesia’s Eastern border on Friday night in the worst massacre of whites since the six-year-old war began.

Three of the missionaries were men and the others women.

A sixth woman was stabbed and beaten and left for dead. She staggered 300 m into the freezing Vumba bush to spend the night before being found semi-conscious by security forces yesterday. Despite intensive care in a Salisbury hospital she subsequently died.

The gruesome murders, by a group of eight to 10 terrorists, happened at Emmanuel Mission School — 15 km south-east of Umtali and 8 km from the Mozambique border — once used as the Eagle boarding school.

The dead, who belonged to the Elim Pentecostal Church, were:

* Mr. Roy Lynn (37), his wife, Joyce (36), and their daughter Pamela Grace. She would have been three weeks old yesterday.

Most of the women had been sexually assaulted, and one mutilated.

The children had been dragged from their beds. Two children were in yellow pyjamas, one with a red dressing gown, and a third in a flowery nightdress.

One child had her tiny thumbs clenched in her palms.

Even hardened security men were stunned by the bloody scene and stood around silently. “The quiet is uncanny”, said one.

Mr. Brian Chapman, director of the Church in Rhodesia and South Africa, visited the scene yesterday. He said: “We saw no humanity here.”

The massacre began shortly before 8.30 p.m. when the white families were forced by the terrorists from their homes and classrooms, and marched to a playing field.

Near the sports pavilion, about 400 m from the main school, they were split into groups, then beaten with lengths of wood and logs, and stabbed.

When security forces reached the scene yesterday, the full horror on the cold, mist-and-rain shrouded Vumba mountainside confronted them:

A mother, beaten to death, lay with her young baby. The baby had also been savagely beaten.

Their arms stretched out to each other, their hands resting an inch apart. The child’s hand was clenched.

The mother had a hand squeezed tightly around her engagement ring, turned into her palm, as she reached for her baby in her dying moments.

Nearby, another woman had died from an axe-wound — the weapon still protruded from her shoulder — and two men, one with his hands tied behind his back, lay beaten and slashed to death.

A blood-soaked chunk of wood had been dropped near to them.

Three children lay in a pitiful huddle, with two women’s bodies next to them.

Some had raised their arms to defend themselves from the brutal blows.

The previous year saw the murder of two white women by six blacks at the St. Paul Mission in southwest Rhodesia. The only gun on the premises was reportedly used by the head priest to slaughter livestock for food. The missionaries had built up so much goodwill with the local blacks that, by the time of the attack, they had forgotten where the gun was. The double homicide had caused a panic in the mission hospital, with the 130 black patients immediately clearing out. Some of these included women from the maternity ward who were in the midst of labor and later gave birth in the bush. 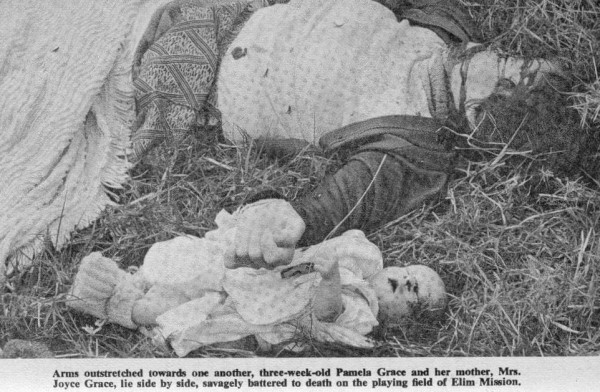 The women killed were Dr. Johanna Decker and Sister Ferinanda Ploner. When later asked about Dr. Decker, a black nurse who had witnessed the murders made this emblematic statement:

She was the kindest person we have ever known. She has worked all over this area and had many remote missions who will miss her. She was devoted to the cause and had never hesitated to sacrifice herself in her work for the Africans, who in turn had grown to love her.

It was when they saw that she of all people had been shot dead by these men that they ran in panic and some didn’t even stop to collect their babies.

If anyone thinks that these atrocities are a thing of the past, they aren’t. According to the Vatican News [10], in 2018 alone, Africans were responsible for the murder of 40 Christian missionaries. This was the most for any continent in that year.

Thomas Hand may have thought he was doing the work of God by preaching to blacks. But somehow I don’t think it was God’s plan for this 37-year-old husband and father to give his life so uselessly for these people. Same with Dr. Decker, Sister Ploner, and all the others. Blacks are obviously not going to change, despite all the love and God whites bestow upon them. And by neglecting to cover these events, the hostile elites who run the media and education system in this country will make sure that these people’s tragic ends never become the cautionary tales they should be.

Forgetting about Arundel Gray Leakey is what led to Johanna Decker and Sister Ploner. And forgetting about Johanna Decker and Sister Ploner is what led to Thomas Hand. See how that works? If people remember how inveterately dangerous blacks are — by the very nature that God had given them — they will see the futility and danger in attempting to reform them. Such remembrance saves lives. Furthermore, white people don’t exactly go around torturing, raping, and murdering black Christians who preach the gospel and build homes for poor people, do they?

I wish to make this clear: I am offering a heartfelt criticism of born-again Christians and other fervent, true-believing religious whites who speak the word of God while ignoring the reality of race. This is a dangerous and futile practice which must end, or else we’ll continue to have senseless deaths like that of Thomas Hand. I understand such people mean well and believe what they say. They should be lauded for their earnestness. And if they still have the need to reform wayward blacks, perhaps they should perform this noble task in controlled environments, such as prisons, where God’s light can shine just as brightly as anywhere else.

At least there you’ll have men with guns who will protect you in case it doesn’t.