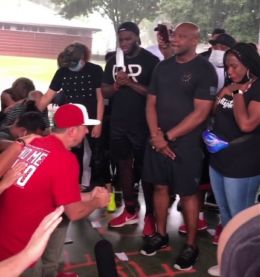 Barry Washington, Jr., a black man, accosted and later assaulted Ian Cranston and his girlfriend, who are white, on September 19 in Bend, Oregon. Ian Cranston shot him in self-defense. Because Washington’s assault on the girl was sexually motivated, the media spun it as “a black man shot for complimenting a white woman.” Deschutes County’s liberal District Attorney threw the book at Cranston, indicting him for second-degree murder. The case is still at trial, but the message has been sent: It’s illegal for white men to defend their women against sexual assaults if the perpetrator is black.

Barry Washington, Jr. was in all probability some form of lowlife. He posted images to Instagram with captions that read, “if your bf white you single to me. Fuck timmy gon do?” Well, as they say in the movies, Barry Washington, Jr. fucked around and found out. Turns out “timmy” was packing. Now he’s dead. 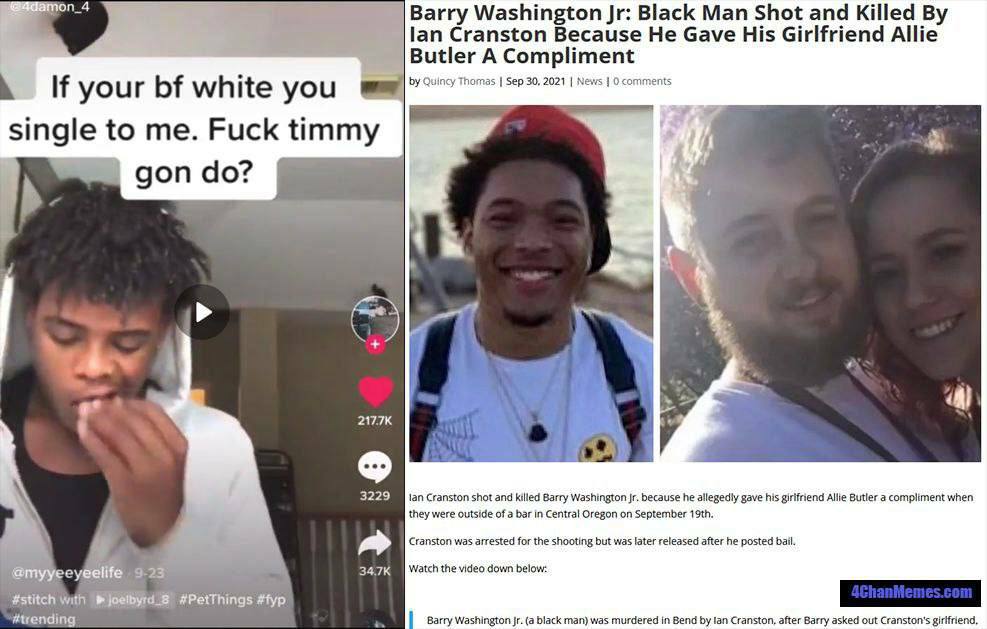 Normally, that would be the end of it: Another menace to society turned into worm food, and the good guys go back home and have a party. But we live in 2021, and sexually assaulting white women will soon become legal for blacks.

This is not to say that the laws on the books will change, but laws are only meaningful when they are enforced. If a man defending his girlfriend, wife, or any other woman from sexual assault by a feral black can be charged with and convicted of murder, then defending a woman from sexual assault is de facto illegal, which of course means that sexual assault is de facto legal when the perpetrator is black. And this latest case came hot on the heels of a jury in Minneapolis deciding that enforcing the law and restraining a negro criminal is also illegal – which means that all manner of crimes will soon be legal for blacks across the board.

However, the sexual character of the crime legalized after the fact in the Washington case raises the stakes for white people in America. While blacks running wild in ordinary crimes might be something that a suburbanite could live with — out of sight, out of mind — the legalization of black-on-white sexual assault means that nowhere is safe. As Sheriff Bart so eloquently put it, where da white women at?

The gradual process of black crime legalization in America has led some to point out that it places blacks in the social position usually held by aristocracy: their persons are inviolate and sacred and they are incapable of being charged with a crime and morally incapable of doing wrong. With the legalization of sexual assault, however, blacks will have attained rights not even historical aristocrats enjoyed — ahistorical claims of ius prima nocte in Europe notwithstanding.

And with the rise of a black aristocratic class, of course, we shall also observe a concordant fall of whites to a status lower than that of a European serf or a negro slave in the American South, where white women are mere booty for the taking – only for blacks, of course.

We could see the warning signs in the Floyd/Chauvin case, but it’s now clearer than ever that in the new legal landscape, whites cannot follow the letter of the law without running afoul of the law, and this is because the spirit of the law has become so profoundly anti-white that being white and inviolate is now illegal. How dare Ian Cranston, that uppity “timmy,” shoot the gallant Barry Washington, Jr., who just paid that ungrateful white whore a compliment? What better compliment can a white woman receive than a blessed Negro’s sexual attentions? She should be on her knees begging for his anointment instead of rutting with her white man, producing yet more problematic white people.

Whenever I address these questions, I always advise people to respect the law. At this point, however, defending your womenfolk from blacks’ sexual predations is now essentially illegal in America. Incidentally, so is defending your property or your own person from their predations. And even if the police happen to respond, it’s now illegal for them use force to restrain them as well. So I’ll break my rule and say that even if it is de facto illegal for you to defend your womenfolk, you must do it.

Obviously, you should try not to live in a jurisdiction where this is a problem. You should avoid blacks like the plague they are, most especially if you have women in tow. But the answer to “Fuck timmy gon do?” should be “shoot you.” If white people are going to survive — if white men are to remain men — we defend our women from black predation, whatever the consequences. This is a red line that anti-whites and predatory blacks must not cross.

Ian Cranston is probably going to be convicted. He’ll most likely be sent to prison for a long time. Or maybe we’ll get lucky and dodge this bullet for now — until the next lecherous Negro accosts a white woman, underestimates “timmy,” and gets shot for his trouble. But we have to assume that, as in the Chauvin case, facts and the law will not matter: the judge and jury will convict him, either buckling under pressure from BLM and the progressive Left, or simply because they are themselves true believers. At that point, it’ll be officially illegal to be a white man in America — unless you’re a racial cuckold.