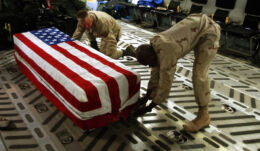 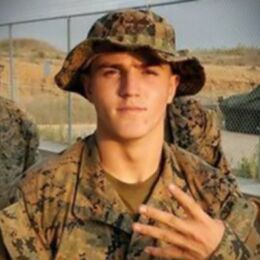 On September 10, 2021, my wanderings carried me to Jackson Hole, Wyoming, where I had the privilege of witnessing the homecoming of Lance Corporal Rylee McCollum, one of thirteen American Marines killed during the evacuation of Kabul. Rylee was 20 years old, a husband, and an expectant father. In one of the more wrenching sentences I have recently read, the Oil City News reported that the McCullom family plans to postpone the funeral until Rylee’s child is born.

As I draft this piece over cigarettes and coffee in a gas station parking lot, a crush of flag-festooned pickups creeping past me on their way out of town, I know that for the rest of my life, this is how I will remember 9/11.

Young as I am, I can only vaguely recall the events of September 11, 2001. Rylee McCollum, younger even than me, was an infant when the towers fell. I cannot remember a time when my country was not entangled in the so-called War on Terror, and the same holds true for Rylee McCollum. I was raised in a progressive milieu, where I was exposed to many destructive ideas. But my elders were at least consistent enough to condemn the brutal Middle Eastern wars in which “our” country was — and still is — engaged. Rylee seems to have come of age in a place where such wars were lionized.[1] [2] Still, it is praiseworthy to brave hazards and undertake great tasks if one believes they are noble and good. A young man of 20 can be forgiven for not seeing through the lies.

And lies they were.

Rylee McCullom did not die pursuing justice for the 9/11 attacks. Even if one accepts the official narrative on the events of that day, the proper response would have been a stringent ban on Muslim immigration to the United States and a humane, orderly, incentive-based effort to repatriate any Muslims already present on American soil. Instead, the number of Muslims in the United States, as well as in our European brother-nations, has boomed over the intervening two decades.

Rylee did not die to spread “freedom and democracy” to Pashtun tribesmen — a perverse goal if ever there was one, but one that is at least comprehensible in terms of naïve, messianic liberal universalism. No, Rylee McCollum died so that the enemies of mankind could “wash money out of the tax bases of the US and Europe through Afghanistan and back into the hands of a transnational security elite,” as Julian Assange famously put it.

Rylee died to serve the geopolitical machinations of the Zionists who wish to encircle and eventually invade Iran.

Rylee died so that the Afghan narcotics trade could be rejuvenated, providing black money to destabilize other nations on the Zionist hit list. We will probably never trace the flow of this drug money, but it would not surprise me in the least if some went to the takfiris who turned Syria and Libya into killing fields, which in turn accelerated race replacement in Europe. The fact that it was all paid for by countless Americans whose lives were blighted and destroyed by heroin is our rulers’ idea of poetry.

For these infernal reasons, a yet-unborn infant in Wyoming will grow up without a father.

None of this will be news to the discerning readership at Counter-Currents. These are the unfortunate facts of our situation, which must be regarded with cool-headed acceptance, even as we work to change them in the future. As Greg Johnson put it in his opening remarks to the Counter-Currents 9/11 Symposium, “we have to look back at 9/11 coldly or the same horrors will be occurring ten years from now as well.” I concur with this sentiment, and as regards the events of 9/11 themselves, as well as the ensuing 20 years of war and suffering, I think I have come reasonably close to this ideal. I have become accustomed to the lies they tell us and the evils they commit in our name, and while I hate these puppet-masters, the raw outrage that consumed me when I first learned the truth has given way to something cold and calculating. However, on September 10, 2021, I was visited by just the sort of wild and caustic hatred Greg warned us against above.

On the afternoon of September 10th, I walked around Jackson Town Square and watched as the assembled well-wishers unfurled their flags and readied their arsenal of tired clichés about the supposed freedoms that Rylee McCollum had died defending. Listening to little snatches of their conversations, I was filled from head to toe with an all-consuming contempt for the entire crowd. These corn syrup-swilling, platitude-mouthing, media-addled retards also bear some responsibility for the fact that young Rylee McCullom had been fed into the woodchipper of Afghanistan — more fertilizer for the harvest of evil our overlords have planted.

Beset by emotion, I made the mistake of sharing my thoughts with a mustachioed middle-aged fellow who wanted to talk to me about the state of things. Although I put things much more delicately than above, the conversation still escalated into a bit of a scene. I fully admit that it was not the proper time and place for such a conversation, but even now I find myself clenching my jaw at the fact that I was the one accused of disrespecting the dead. What greater disrespect could there be to the memory of Rylee McCollum than to rehearse the very lies that got him killed in the first place?

In that moment, my hatred for my fellow countrymen far exceeded my hatred for the real war criminals. Only now, as I sit and scribble in the aforementioned gas station parking lot, do I realize how blind I was. How rare and precious it is, in this degenerate age, that Wyomingites by the thousand turned out to show their respects to a stranger, for the simple reason that he wasn’t all that strange: He was one of them.

That feeling of identity is what words like “community spirit,” “solidarity,” and “patriotism” try to capture. What I bore witness to was a vestige of the American nation that our overlords are busy replacing with a multiracial shopping mall. It is normies like them, not rootless cosmopolitans like me, who keep alive the last remnants of American nationhood, even while their loyalty, solidarity, and patriotism are being exploited by their enemies.

It is evil to exploit people’s vices. It is obscene to exploit their virtues.

No matter how thoroughly their minds are rotted by propaganda, the Patriots of Flyover Country will always correctly be viewed by our enemies as a threat. This is why Ashli Babbitt, who enlisted after 9/11 and served 14 years in the military only to die for the feckless traitor Trump, was compared to the 9/11 hijackers by the feckless fool Bush in his speech marking the 20th anniversary of the attacks.

We were warned that the War on Terror would come home. Now white American patriots have been branded the number one threat to the regime. We should never lose sight of the real enemy. Let the patriots tend the sacred fire of fidelity while we work to create a country worthy of them.

Rest in peace, Rylee McCullom. Whenever September 11 rolls around, I’ll remember you, and the rest of the deluded, good-hearted people of Jackson Hole.

[1] [5] See, for example, this article [6] from the Cowboy State Daily, an excerpt from which I present here to substantiate my impression of the ideological environment in which LCpl McCollum was raised: “Kathy McCollum also called her son a sacrificial lamb and noted that Trump would never have allowed the Taliban to retake control of Afghanistan . . . ‘I can’t live with knowing my son’s life was taken for nothing,” Kathy McCollum said. ‘So Biden could repay his debt to China. They will now have full control of Afghanistan and my son will be a sacrificial lamb. My son was murdered for Biden optics.’”