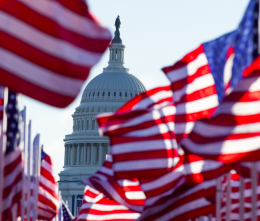 American liberals are torn over our national symbols. On one hand, they claim them as their own and say they represent everything they love–multiculturalism, equality, anti-fascism, and DEMOCRACY. On the other, they will say at times these symbols offend them and must be replaced. This conflict was encapsulated last week by New York Times editorial board member Mara Gay.

The black journalist recounted on MSNBC’s “Morning Joe” her horrifying ordeal over the first weekend in June. “I was on Long Island this weekend visiting a really dear friend, and I was really disturbed. I saw, you know, dozens and dozens of pickup trucks with explicatives [sic] against Joe Biden on the back of them, Trump flags, and in some cases just dozens of American flags, which is also just disturbing … Essentially the message was clear: This is my country. This is not your country. I own this,” Gay said [2]. “I think that as long as they see Americanness as the same as one with whiteness, this is going to continue.”

She added: “That is the real concern. Because, you know, the Trump voters who are not going to get onboard with democracy, they’re a minority. You can marginalize them, long-term. But if we don’t take the threat seriously, then I think we’re all in really bad shape.”

To recap, a prominent black journalist said Old Glory disturbs her because it represents white people, and we need to figure out ways to separate American symbols from whiteness. We also need to marginalize and reeducate these backwards whites.

The “Morning Joe” panel, consisting mostly of “patriotic” centrists, nodded along with Gay’s assessment. The set backdrop displays a dozen or so American flags flying heroically, which made their agreement all the richer. The clip became instant conservative click bait and mainstream cons filled Miss Gay’s mentions with Americans flags. The New York Times defended its editorial board member while Gay accused her critics of racism. Some liberals showed support for her as well. “As a military veteran, I completely agree with Mara Gay. It is disturbing. Large American flags on trucks are performative nonsense that are absolutely intended to communicate that America is a conservative, white country,” tweeted [3] trans activist “Charlotte” Clymer.

This is obviously not the most important story in the world, and it’s tailor-made for conservative media to obsess over. There’s an out-of-touch liberal journalist who needs a safe space from the Stars and Stripes! It’s easy to mock Gay’s stance, and it goes along with her past analysis. She famously claimed [4] Michael Bloomberg could give every American a million dollars with his $500 million campaign war chest. This incredible mathematical analysis was not well-received, which led Gay to accuse her critics of racism (a common argument from black journalists). Gay is clearly an idiot who has her job thanks to affirmative action. Like most black journalists, she’s incapable of deep analysis or original insight. She’s just there to satisfy a racial quota.

In spite of her stupidity, Gay’s stance on the flag signifies the Left’s conflict with American symbols and patriotism. Patriotism is ripe for them to define, as they do control the institutions that shape our culture. Yet, they can’t resist wanting to destroy the symbols that inspire ordinary Americans.

“Morning Joe” host Joe Scarborough attempted to offer the nation a lib-friendly patriotism just a few weeks ago. “America, love it or leave it!” he yelled at Trump supporters who refused to accept the present order [5]. “If you don’t have respect in American democracy anymore, if you don’t respect Madisonian checks and balances if your guy doesn’t win, if that’s the new rules of engagement for this great republic, then just leave our country! Because you’re unworthy of it!”

He also made sure to argue that foreigners are superior to white Americans: “There are millions of immigrants who will come here and raise their right hand and buy into the creed and believe that we are exceptional, that believe American democracy is the greatest government on the face of the Earth!”

In this image of America, people of all races, creeds, and sexual orientations join together to wave the flag as “anti-American” white Trump supporters are deported to Siberia. This rainbow coalition is the real America, not founding stock whites living in rural backwaters. This is a patriotism liberals can adopt but they’re incapable of doing it. All it takes is refraining from seeing national symbols as disturbing and declaring our founding documents white supremacist. This is apparently impossible. They’re too arrogant to appeal to normie whites with patriotism.

This is very fortunate. The cringe patriotism of Joe Scarborough is an abomination that imposes multiculturalism and unrestricted egalitarianism on the American people–and they would likely buy it. It’s similar to the delusions that the troops who stormed Normandy [6] were Antifa or that the Union armies fought for racial equality. “LOVE IT OR LEAVE IT” did convince millions to support George W. Bush and the Iraq war. This same mentality could potentially persuade otherwise healthy people to think it’s great to tear down “traitor” statues and have transgender Marines.

But the Left is moving completely away from any traces of patriotism. Black Lives Matter rallies don’t fly Old Glory, unlike the civil rights demonstrations of the 1960s. Protesting the anthem is considered a mandatory act for athletes. Our own leaders condemn America as a fundamentally racist country and trace this plague back to the founding. The Left is more comfortable with the pride flag and the black power fist than with Americana.

Traditional patriotism is symbolic of whiteness. Predominantly white high schools will fly the flag and sing the Star-Spangled Banner as they play rival non-white teams. Schools have of course banned the flag [7] to avoid offending the sensitive non-whites. The battle over the anthem protests ultimately came down to race. Blacks and their enablers argue the flag represents white supremacy, whites say it represents their country. Only 35% of blacks feel positive emotions [8] about the anthem, compared to roughly 80% of white Americans. Since blacks, being America’s gods, shape our consciousness, that lukewarm feeling will only grow among the rest of the population.

Meanwhile, middle American whites will still be inspired by the flag and patriotism. Sixty-four-year-old Lisa English is a typical example of this reverence. The Washington Post interviewed the retiree in May about her thoughts on patriotism and anthem protests. She proudly flies the flag outside her North Carolina home and says it’s “our history.” English recalled how terrible she felt when she couldn’t stand for the anthem at a recent football game because of a leg injury. No black or immigrant would probably feel the same anguish over such a matter.

Many right-wingers see the corrupt Empire of Nothing and want to separate completely from the symbols it appropriated from the Old Republic. This makes no sense with the Empire itself dispense with these symbols and they’re still cherished by our people. You can’t create symbols overnight that will make our people feel anguish at not standing up for them. We should do the opposite of what Mara Gay suggests. We should divorce these symbols from the present and make them represent the people the regime hates. Those truck drivers on Long Island are right to declare that these are our symbols.

We want people like Mara Gay to be disturbed by the American flag. It’s better for them to fear it than to claim it as their own.