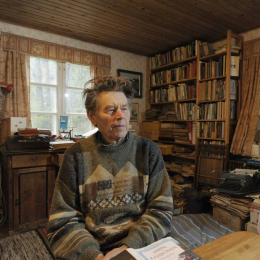 Like other Nordic countries, Finland has a strong conformist mentality. The Law of Jante [1] is in force to keep too headstrong or conflict-seeking individuals in leash. In this respect, it is strange that one of the modern Finnish cultural icons is a character as extreme as Pentti Linkola. Throughout his career as a public intellectual, Linkola, who died on April 5th, aged 87, said things that would have made anyone else a social outcast or even a criminal. He described German National Socialism as ”a magnificent philosophy,” openly rejoiced the 9/11 attacks, praised the Baader-Meinhof Group, and said that the global human population should be reduced by means of bacteriological warfare.

Later I met Linkola several times in person, although I cannot say I knew him well. The first time was in autumn of 2002, when I went to his fisherman’s cabin in Valkeakoski to interview him for a literary magazine. Linkola told me about his aesthetic preferences. He said that in Finnish literature he liked the classics most, but he also read widely contemporary prose. He wondered why ”two masterpieces of world art,” Aleksis Kivi’s Seven Brothers and the symphonies of Sibelius, were created in Finland, even though Finland is ”a remarkably stupid nation.” Of his stylistic ideals he said something very agreeable:

I think that good prose style should at least be lucid. And it is a difficult goal, depending on the subject, of course. If a cleaning lady finds ripped sheets in the wastepaper basket, she should at least understand what the writer has meant, no matter what she thinks of it. And style should not be dryish, one should avoid professional jargon, and if there are Finnish equivalents for words, one should use them, not expressions derived from Latin and other foreign languages. I have tried to make my style clear and colorful on the one hand, but also avoid clichés and too original expressions. There should be some kind of balance; one should use rich language but not subvert the constructions of language. It is terribly demanding indeed, and one can never fully succeed.”

The Linkola I knew was a cultivated, polite, and self-ironic man. He had a dry sense of humor. When I met him at the Helsinki Book Fair a few years ago, I asked: ”Pentti, how are you?” and he answered: ”Well, worse than yesterday, better than tomorrow.” Sometimes he telephoned me to discuss some newspaper article or book. During one of his calls, Linkola, 84 years old at that time, complained that his feet, which had always been the strongest part of his body, had started to fail him. ”Nowadays I can walk only a couple of kilometers nonstop, and then I already must rest at the side of the road.”

It is not very difficult to understand why the Dissident Right appreciated Linkola. He criticized modernization, humanism, and globalism in a way that was charming even in its most extreme and provocative forms. Like many luminous figures of all eras, Linkola was a son of an impoverished upper-class family, and his hatred towards the vulgarity of the modern age stemmed from his family background. He was no politician and had no mass movement behind him, so he was immune to all forms of political correctness. Unlike most other thinkers of the Green Movement, he always recognized the ecologically and culturally disastrous effects of mass immigration. He said to the author Eero Alén: ”Helsinki has become a Negro city. Everywhere you go, you see Negroes. That kind of Helsinki is no true Helsinki for me.”

It is harder to grasp why the appreciation for Linkola was so wide in Finnish society. One often hears the sentence ”I appreciate Linkola because he practices what he preaches,” but I think that is a cliché. No one fully practices what he preaches, because life itself is a kind of compromise. Of course, one should avoid gross contradictions between words and deeds, but especially in the case of livelihood and survival, everyone makes exceptions.

Linkola, who rejected most comforts of modern society, was probably more consistent than most of us. Certainly, he was more consistent than a typical Green Party parliamentarian who never leaves Helsinki except when he flies to an international climate congress. But like his friend and associate Eero Paloheimo [3] said, Linkola was not admired because of his consistency, but because he suffered. For Linkola, environmental disasters were not abstract administrative problems but personal catastrophes. He was a passionate biophile, for whom the frail bond between man and Earth was a deeply intimate and tragic thing. Unlike so many others, he refused to abandon his most genuine source of joy. This refusal led him to the fringes of society and made his life a one-man demonstration. It also made Linkola a more interesting figure than most of his admirers and enemies.