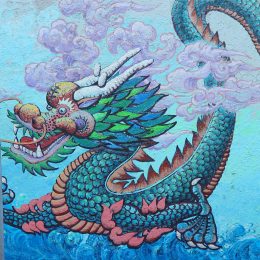 People want someone to blame for the coronavirus outbreak. The obvious culprit is China. It originated in China, China tried to cover up the outbreak for weeks, and the communist state has not been open with what it knows about the virus.

Liberals insist that calling the coronavirus the “Wuhan Virus” or the “Chinese coronavirus” is racist. Mainstream outlets run stories about the growing danger of anti-Asian racism. They try hard to downplay where the virus came from and how Chinese policies and customs allowed it to get out of hand. Don’t expect any segments on bat soup or disgusting dietary habits. They certainly won’t speculate on whether the virus leaked from a government facility. China’s response has mostly earned praise from journalists, in spite of the nation’s response being responsible for its global spread [1]. Liberals also seriously consider China’s conspiracy theories that the U.S. created the coronavirus. Social media platforms allow these theories to spread to millions while censoring anyone who claims it’s a Chinese bioweapon [2].

China effectively pushes its narrative to the West. Chinese officials know the best way to persuade liberals is to cry racism.

Racism is not the right tool to cover your own incompetence pic.twitter.com/LmGDyPsULt [3]

China is a Han supremacist state [5] that puts ethnic minorities into concentration camps and suppresses their cultures. If anyone was “racist,” it would be the Chinese. But since they’re not white, they can still attract sympathy over the horror of naming a disease the Wuhan virus.

There are obvious reasons the media and liberals carry water for China. One, it allows them to stick it to Drumpf and racist whites. It doesn’t matter if they’re an authoritarian state that promotes racial supremacy. They’re non-white and can make Trump look like a fool. The second reason is that China exerts incredible influence over the media and business world. Every company wants access to the Chinese market. Criticizing them comes at the price of doing business. China announced Tuesday [6] it would expel New York Times, Wall Street Journal, and Washington Post reporters over mildly critical coverage.

China is a serious country that doesn’t allow itself to be mocked or ridiculed by entities desperate for its money. The Chinese forced the NBA [7] to bend the knee over one team official supporting the Hong Kong protests.

The most curious development is wignats deciding that China needs their support. They claim China responded effectively to the virus and it’s racist/boomer/neocon to blame China. They aggressively attack right-wingers who dare blame China. All blame lies at Trump’s feet, according to wignats.

The reasons wignats are standing up for China-shilling are manifold. One, they hate Trump so much that they will counter-signal any popular opinion from the MAGAsphere. Most Trump supporters blame China, so wignats decide they must dispute this. In many ways, wignats are turning into racist resistance aunts. Posting the same coronavirus takes as MSNBC further solidifies this image.

The second reason is more respectable: they actually admire China. Many right-wingers, particularly in Europe, see China as a necessary global counterweight to America. China appears as a challenger to America’s globohomo agenda and will bring down the cursed unipolar order. China also presents an alternative model to liberalism. The nation isn’t a democracy. It upholds the homogeneity of its core ethnic group and advances its interests nationally and globally. It doesn’t celebrate degeneracy quite like our own culture. It also appears as a serious country versus the clownish West.

It’s tempting to see China as some anti-liberal bulwark, but identitarians shouldn’t fall for it. China doesn’t care about our cause, and the Han will never be our allies. China is developing biological weapons to specifically target whites [9]. The Han treat all of their ethnic minorities like dirt, and they can’t wait to treat us the same way.  Chinese global domination will mean the eclipse of white civilization. It will probably be worse for white people under GloboHan than globohomo. At least globohomo doesn’t put us in concentration camps.

That’s not to praise globalism’s clown world order; both choices are bad. We shouldn’t side with either. Sympathy with the red dragon is simply a case of “the grass is always greener on the other side.”

The Real Right often sympathizes with foreign powers who appear to oppose globalism. Russia is the usual recipient of this adoration. Like China, Vladimir Putin’s Russia offers an alternative to global liberalism and stands up for its people. But, like with China, the rosy vision obscures the seedier aspects. Russia has many admirable traits, but a kleptocracy is not going to save the West. However, it makes more sense to like Russia than China. Russia is still a white state that does not want to turn whites into a serf class.

Arguably, the most sensible reason for opposing China-blaming is that some of the most cringe people in politics also hate China. These folks also rely on incredibly cringe reasons to oppose China. They don’t oppose China as a racially alien empire that seeks to subjugate whites — they hate China because they don’t respect human rights and democratic virtues. This is a common theme among conservatives. Many Conservative Inc. types started wearing “stand with Hong Kong [10]” t-shirts to NBA games to protest Chinese tyranny. These demonstrations were incredibly lame.

Some on the Dissident Right feel that if you blame China, you further reinforce the cringe arguments against China. It doesn’t have to be this way. It is lame to oppose China on behalf of liberal democratic values. It is good to oppose China based on ethnonationalist concerns. China is a threat to whites and Chinese global dominion is bad for us. The Dissident Right needs to make this the focus.

This allows us to make the case for restricting all immigration from China, and encourages proper nationalist feelings among Americans. It also supports efforts to make America more autarkic and less reliant on foreign industry for critical supplies. Anti-China sentiment needs to be utilized to support nationalism.

Conservatives want to imagine that China is the new Soviet Union that is exporting communism around the world. In truth, they’re spreading out their ethnic power. The battle against China must be seen as a war of peoples, not of clashing global ideologies.

The coronavirus panic undermines the appeal of globalism. Globalism is the disease that brought this virus to Europe and America. Globalism is exploited by the Chinese to further their ethnic power.

Globalists have every reason to support China and defend Chinese misdeeds. The Dissident Right has none.