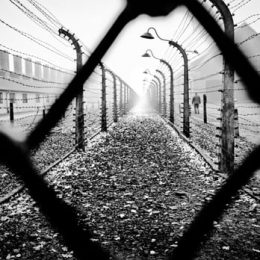 What does the teaching of Auschwitz actually consist of? That man, when he finds the opportunity, is capable of the worst? If anyone needs Auschwitz to learn this, let him learn it from Auschwitz. Or that in technological modernity modern technology can be used for mass murder? If this surprises anyone, let him learn it from Auschwitz. Or is it the sheer number of victims, the ominous six million? In other words, something for the Guinness Book of World Records? But be careful: records are made to be broken!

Or is the really instructive thing about Auschwitz the obvious collapse of the faith in progress, i.e., the insight that such a thing could “still happen in the 20th century?” The final disillusionment, in other words, irrevocable after the First World War and the Gulag: the “project of modernity” has been shattered once and for all? What has always happened will happen again. There are no irreversible developments in the realm of morality, only an eternal up and down. The only real legacy of the Enlightenment is technology—and this is in the process of breaking free from its natural basis. The history of the project of the 18th and 19th centuries is thus of a total failure which became manifest in the 20th century: morally between the Great War and Auschwitz, technologically and ecologically in the environmental crisis of the late 20th century.

One particular twist may be simply that for “Auschwitz” (in contrast to the environmental crisis) a “culprit” can be identified who is not equivalent to mankind as such: the German. His identification thus aids the genuine overcoming of this monstrous experience. One need only be a good antifascist after the fact, and half the 20th century is morally banished.

On the Logic of Antifascism

Every interpretation of history is the work of a present moment, which follows ideological goals determined by it, looks for meaning, or wants to determine concrete friend-enemy relations. In the case of the Auschwitz complex, so popular today, it is obviously an attempt to establish, within a thoroughly relativized world, a negative absolute from which new certainties can be derived. “Auschwitz” forms a myth insofar as it is a truth that is to be withdrawn from discussion. This myth, however, has an essentially negative character, since something is to be established as a singularity that should not be. For this reason, the political movement underpinned by this complex bears a negative name: Antifascism.

At one time, antifascism was a mere minimal program, a label, under which a wide variety of political tendencies could be grouped: revolutionaries and reactionaries, Stalinists and Trotskyists, pacifists and imperialists, plutocrats and socialists, Zionists and anti-colonialists, democrats and monarchists, Christians and atheists, liberals and totalitarians—all could group themselves under a common banner which was necessarily quite indeterminate, apart from the definition of its “fascist” opponent. For the most consistent antifascists, the communists, antifascism was merely a confidence trick, a deception to enable them to hitch useful idiots to their wagon. But this was only possible because apart from antifascism they believed in essentially stronger and more precise truths, as taught by “scientific socialism.”

These truths have disappeared today. Of the many ideologies which ruled and mobilized the 20th century, only the worn banner of antifascism remains. All the more strongly do people cling to it and attempt to make it a kind of official religion. At the same time, antifascism seems to be acquiring a new programmatic significance with a specific, paradoxical structure.

“Auschwitz” or “the Nazis” stand within this ideological figure for the total negation of “man,” a negation which once became historically real. With Hitler and his cronies, the secularized devil and the personnel of hell appeared on earth in person. This devil carried out a singular deed, the mass extermination of the Jews, to which the following significance was attached: it amounted to nothing less than the practical negation of humanitarian universalism. Hitler had not, however, destroyed “Man” as such, but the opposite of this generality, the Jews, i.e., a particularity. This very attempt to destroy a (national-racial) particularity in the name of another (national-racial) particularity is, however, the most extreme denial of humanitarian universalism, i.e., the idea of humanity and its inalienable rights. With fascism, therefore, the anti-human appeared, so that antifascism could become a religion of man, finding its symbol in this very negation of man.

This explains the zeal with which every “historicizing,” “relativizing,” and “comparability” of Auschwitz is to be combated. Whoever relativizes “Auschwitz” relativizes absolute inhumanity, and thereby the integrity of man. The only absolute that modern society, corroded with all sorts of relativism and perspectivism, could still possess would itself be relativized. The establishment of the Auschwitz myth can thus be understood as an attempt to return certainty to a skeptical world. Admittedly, these certainties are now themselves merely historical, i.e., factual, not of any rational or spiritual nature. They consist in what courts of law characterize as “obvious facts,” i.e., as truths which no longer need proof. This is a sensational turn in European intellectual history: three hundred years of epistemology are being belied by an historical revelation!

But what follows from this? The now-emerging new religion of humanity (never rationally established in all the time since the Enlightenment) can base itself on a firm foundation of historical fact and infer direct political consequences from this. One important programmatic demand aims at the “multicultural society.” But this concept is itself ambivalent. It is easy to show that it can be understood in the sense of the mutually exclusive versions of universalism and relativism/particularism.

In both cases, the opponent of the multicultural program is the indigenous people of the industrialized countries, whose resistance to immigration and foreign infiltration [Überfremdung] is to be broken through systematic identification with fascism/racism/Right-wing radicalism. Hitler’s attempt to destroy one national-racial particularity in the name of another national-racial particularity becomes the standard reference point for all attempts at asserting particularity—in any case, when they proceed from the indigenous people of the industrial countries. But other particularities do not fall under this judgment: the anti-European xenophobia of liberation movements is not condemned, and certain people such as the Kurds or the Jews can insist on their ethnic particularity without this being made into an accusation against them.

A remarkable asymmetry in the concept is obvious here: antifascism is to a great extend anti-Germanism. But this actually contradicts its universal self-understanding, and reveals a national core whose consequences cannot be entirely foreseen, but which can be explained in terms of its origin.

Hitler destroyed the Jews in the name of the Germans, i.e., from abstract and undifferentiated “humanity,” he took two nations which were distinguished from the profane remainder of humanity insofar as they possess the complementary character of the absolute: the absolute culprits and the absolute victims. This distinction ends by assuming significance for the universalistic program of creating a uniform humanity, viz., this latter still includes two particularities foreign to it in principle: a negatively chosen people, the Germans, and a positively chosen people, the Jews. Hitler thus succeeded in a way he had not perhaps reckoned with: he assigned a special, complementary role to Germans and Jews for all time, one that would not disappear from human memory as long as there are still Germans and Jews. But this has a last, paradoxical, consequence. The project of homogeneous humanity will remain unrealized for as long as these two most stubborn remnants of national particularity are not successfully assimilated as well, and thereby eliminated. Against this assimilation of the Germans and Jews, their dissolution into mere “human individuals,” however, stands the structure of the Auschwitz myth, whose core lies precisely the rebellion of the particular against the general.