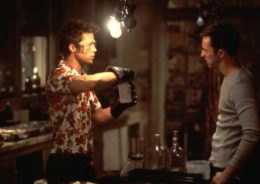 Nationalists often have a certain feeling of guilt. They know that the current political and social system is aimed at destroying all white nations. Thus, nationalists are perfectly aware that every dollar or euro they give to the system supports the goal of white genocide. And they are right. However, this knowledge brings with it a feeling of guilt which can cloud judgment and lead to making bad decisions.

Nationalists often say that we need to starve the system. We need to cut off all cash flow to it, and the system working for our destruction will then die. However, it is easier said than done. You can boycott a certain brand of products, for instance one which openly uses anti-white propaganda in its commercials [2]. But you cannot stop using certain products, such as toothpaste, and any brand you buy pays taxes which support the anti-white system.

You can abandon city life, buy a property, build a house, and try to live off the land. But again, you will need to buy some tools, some materials, and you will still need electricity and gasoline. Each of these you have to buy from a company which is a part of the system – even if not directly, then certainly it is linked to it through the tax system.

There is, of course, one more option, and that is going fully off the grid and becoming a hermit in the woods. In that case, you will have to get rid of all electronics, too, since these companies are leading the anti-white struggle. And don’t forget the tax authorities – most countries have some sort of land tax which you have to pay, unless you squat on land belonging to the government or someone else.

You also have to remember that even if you managed to cut all ties with the system, you are only one person. Does one man withdrawing from it really affect the functioning of a system which encompasses the whole globe? How many people will remain connected, with their money providing the needed cash flow?

This realization that you are entrapped in the system aimed against you and your folk, this realization that this is a maze without an exit, in which you are being tricked to support your own destruction, leads to resignation. If you cannot escape the system, then what is the point of doing anything? It is a “heads – the system wins, tails – you lose” situation. This resignation can lead to despair which results in nihilism and hedonism. It is easy to point fingers at guys who shitpost all night, but later spend their time drinking and playing video games. But how many of us have not been tempted to do that? And how many of us living a more middle-class lifestyle are not at times tempted to just say, “screw it, there is no hope,” and give in to spending our money on a new car, whores, and cocaine? After all, if there is no choice, why not focus on the dopamine?

But there is a choice – there is an exit from this maze. The problem is with focusing on the negative aspect of the situation, namely the ever-present system, that gets some kind of support no matter what you do. The problem is often with our perceptions, which make us see a very distorted or incomplete picture and from which we draw the wrong conclusions.

The system is designed to destroy you, and you cannot completely detach from it. And even if you did, this would not change the situation. This is true. But this is not the whole picture. In the darkness, there is a ray of light, getting brighter with every hour. Besides the system, there is a counter-system.

This counter-system is a conglomerate of all the nationalist initiatives aimed at creating an alternative culture and an alternative society. All the cultural and metapolitical, political and social, virtual and real-life initiatives are the nuclei of the coming European renaissance. It is a loose network of good Europeans who are dedicating their efforts to saving our race from destruction.

One of the greatest achievements of recent years in the nationalist movement has been the amount of good books which are being published, especially in English. And they are published by our people, so when you buy them, you not only educate yourself, but also support the good guys. So: double win. Of course, these publishers have to pay taxes, so some small part of your money goes to the system. But most of the money goes directly to our cause and our people. And you can already see the results through the development and growth of these initiatives.

When it comes to culture, you can minimize the amount of money you give to the mainstream. You don’t have to buy books; you can get them from the library. You don’t have to buy CDs; you can listen to the music online. You don’t have to go to the movies and pay for the ticket; you can take some inspiration from info-anarchism (if you know what I mean). This is how you save your money, and limit its flow into the system. But that is not all. The question is what happens with the money you save. You should make it flow into the counter-system. Remember that the counter-system is much smaller (so far!) than the system, and every dollar or euro counts much more for our guys than for the mainstream companies. So buying one book or one CD from our people gives more to the struggle than not buying ten mainstream books or albums.

You should not feel guilty that you went to see that blockbuster with your girlfriend or that you bought some detective novel. Just buy the next book from one of our publishers. This really makes a difference; you can ask the publishers themselves.

One of the reasons I am an enthusiast of the modern nationalist-oriented black metal scene is that it is a great example of giving a giant middle finger to the modern system. They have taken the “do it yourself” slogan very seriously and created a scene in which our bands are recording the music and performing, our artists are doing the graphic designs, our zines are doing the interviews, our guys are doing security at concerts, our guys are printing the notes, and our guys are producing and selling the related clothes and accessories. And all this while explicitly and implicitly promoting ideas hostile to the anti-white system.

Of course, in some cases it is difficult to find good guys to support. One of these fields is everyday items such as soap, shampoo, cosmetics, and the like. I am sure there are some good guys making and selling their own soap (it worked in Fight Club, after all), but most of us have to rely on what we can buy in the big markets. What can you do it in this situation? The commercials are trying to sell the lie that we would be happier if we started using an expensive soap or a specially-designed face cream. But this is not true. You are unhappy, because you know the truth: you know that there is a white genocide going on, and no coconut-scented shampoo will wash this feeling away. Focus on what is important: buy what is necessary, do not overpay, and use the money you save to support the counter-system.

There is a similar situation in regard to clothes. There are some good nationalist producers, but it is mostly streetwear. If you need to dress better, you cannot go with this look. But you don’t have to buy the most expensive clothes. You can still dress sharp by shopping at secondhand stores. Try to attain your goals while trying to save money, to later put it into the counter-system.

Another very important thing is to support our content creators. I know that we have all got used to the fact that everything is free on the Internet. But we have to break away from this thinking and start supporting our guys. If you want to have more good blogs, good videos, and good music, you have to support the creators with your money.

What if you do not have the money to support the counter-system? Well, first of all, this is probably not true, because you can try to save even a little and, for instance, buy a book. You can also make small donations to the content creators. But besides money, you can give your talent and your time. If you have any skills which might be useful, reach out to those who may need them. You can also encourage others who are already doing something. A positive comment, a message, or an e-mail with uplifting words can go a long way, and bring much more sense into the life of a creator. You surely know how the Internet works, so you know that even liking or sharing something on social media, or watching a video, can make a positive difference.

Don’t fall into the maximalist fallacy. It is not all or nothing. Small steps lead to victory. We cannot starve the system – yet. But we can feed the counter-system, which is getting bigger and better, and one day will replace the evil system of white genocide.