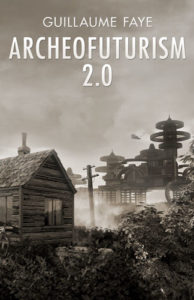 Guillaume Faye’s new novel begins in the last few days before the outbreak of the First World War. A fashionable and rather aristocratic group of young people (nowadays we would call them “privileged”) consult a clairvoyant who gives an astonishingly accurate series of descriptions of increasingly distant futures. After assuring her wealthy customers that there would in fact soon be a war she projects forward to the prosperous and forward-looking inter-war years, “The people there look happy; they’re dancing. Life seems to have gotten the upper hand again. The clothing has greatly changed. Automobiles, much more modern than those we have now, are parked, or cross the square. All is well once more — but only on the surface. The fire is not quenched; it smoulders” (p. 4).

This could well be the tag line for the book, and for Faye’s worldview: The fire is not quenched; it smolders. At once, this phrase captures the transience of peace, and the inevitability of the return of violence; and also it might be applied to the spirit of the European people which today appears to be at its lowest ebb but which has in fact entered a period of latency, one that will surely end.

Readers of the first Archeofuturism will recall that that book ended with a short story that sought to dramatize some of the ideas that had preceded it. We learn from the foreword to Archeofuturism 2.0 that Faye was asked by his editor to write some more stories in a similar vein and the volume under consideration here is the pleasing result of that suggestion.

Following on from the initial story of the psychic Mlle Pythia’s alarming visions, there are a series of linked short stories that stretch through the present day and further and further into the planet’s future.

Now, beginning the book in the year 1914 is an astute maneuver because it was such a pivotal year in European history. Even before the outbreak of war there were already signs that things were beginning to break down but they would not have been apparent at the time. The sinking of the Titanic two years earlier would have struck many people as tragic but not as especially portentous, and neither would the emergence of new art forms such as Duchamp’s readymades, but with the benefit of hindsight they were clear signs that the Faustian civilization was foundering and falling apart. Of course, a talented clairvoyant shares some of this knowledge with the reader and so we wince at the incredulity of the young aristocrats who treat Mlle Pythia’s pronouncements as a mere parlor game. Little do they realize how unimaginably cruel the twentieth century would be to their European homeland.

The narrative then zooms through the present into the near future. Had Faye chosen to dwell a little longer in present day France it would have been interesting to compare his depiction with that of Michel Houellbecq’s novel Submission [3]. In Houellebecq’s book, Marine Le Pen makes it through to the second round of the 2017 presidential elections at which point all the opposing parties unite behind a moderate Muslim candidate. After he is elected, France swiftly descends into a sort of outpost of the Caliphate with an air of bemused inevitability. In any case, if the past couple of years have taught us anything, it’s that the rhetoric of ‘far right’ doomsaying is rapidly converging with an undeniable reality on the streets of most European cities.

Faye’s narrative continues in a manner that is neither hurried nor belabored, demonstrating that he has a natural knack for storytelling. But with this type of speculative fiction it is always the case that it becomes more difficult to retain a sense of empathy the further that the story reaches into the future. As long as we are dealing with the past or the present we feel reasonably sure that we can orientate ourselves into a particular context of time and space. But the further in the future a book is set, the more speculative its setting becomes. Faye’s projections for the twentieth century — that it will be an extended disaster — seem anchored in current trends. But when he projects further into the future — thousands of years, or even into an unimaginable expanse of evolutionary time — it becomes more difficult for the reader to re-establish a sense of empathy with the characters. In this respect it shares something with David Mitchell’s Cloud Atlas, another book that seeks to link separate historical (and future) epochs through linked story-lines. Where Archeofuturism 2.0 manages to succeed in this is through the unfolding payoff of certain actions carried out early in the book. Particular artifacts return again and again, and, with the passing of aeons, retain a certain poignancy.

The clear message of Archeofuturism 2.0 is that the future will be very different from the past but that it will continue to play out similar conflicts and reproduce certain ineradicable hierarchical structures. In this it is an unusual piece of science fiction (but see Lennart Svensson’s Science Fiction Seen from the Right [4]), as it is more usual for that genre to produce egalitarian fantasies essentially similar to those portrayed in Star Trek. A good example of the latter tendency would be Iain M. Banks’ series of Culture novels, a body of work that assumes that the progression of time will necessarily lead to evolutionary improvements turning humanity into a collective embodiment of Justin Trudeau. This teleological assumption also lies behind the general appetite for transhumanism, a movement that looks towards a world of tabula rasa equality where such accidental attributes as gender, race and prior sexual orientation will no longer exist. Faye accepts the coming of some form of transhumanism, but he rightly sees that there are important organizing principles that lie anterior to the meaning of being human, and that these principles will always re-emerge, perhaps in surprising ways.

Another important theme in the book is that of an impending economic/technical/ecological disaster, something that Faye terms the ‘convergence of catastrophes’. He sees this disaster as coming about due to the fragility of globalism based on a system of debt, the impossibility of integrating large numbers of non-European citizens in European countries, and the exhaustion of fossil fuel supplies. As he describes the decline of the twenty-first century into further and further chaos, the book begins to resemble a fictionalized account of John Michael Greer’s The Long Descent [5]. Indeed, those of us of a naturally more pessimistic frame of mind are already asking ourselves which particular scenario of disaster is the most likely. When the disaster comes, will it be a slow, drawn out series of low-level skirmishes and breakdowns or a rapid and singular turning point? There is no longer an option of ‘if’.

In his review [6] of the first Archeofuturism volume, Michael Walker comments on Guillaume Faye’s oratorical skills and opines that “Archeofuturism suffers from coming from the pen of a man more at home before a gathering than a keyboard.” And it has to be said that, as in the books of Jonathan Bowden, sometimes a strong rhetorical voice can be a weakness in a work of fiction. Here, Faye adopts a third person omniscient narrator’s voice, a choice which tends to diminish the power of the narrative and sometimes tarnishes the story with an old-fashioned feel. This is regrettable because the story itself is not at all reactionary, and it stands up well as a piece of literary speculative fiction.

Ultimately, this is an ideal book to recommend to anyone who might have become curious about the Alt Right phenomenon that has taken over political discourse in recent months (although Faye himself might reject the association). It provides an easy introduction to the broad trajectory that the Alt Right posits in an entertaining and engaging way. But, importantly, it is based on the most sober and plausible analysis of where we are heading that can be found anywhere in contemporary political discussion. If Archeofuturism 2.0 whets your appetite, then you can work back to Archeofuturism and discover the theoretical framework that lies behind this novel. After all, even as we move into the future we should always look back to the primary structures that will continue to organize our lives.