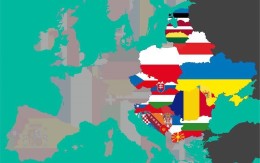 Events in Europe have been developing at great speed in the last couple of years. There was the Ukrainian Revolution, which induced an aggressive Russian response, revealing the dormant anti-western, anti-white feelings in its leadership and the majority of its populace. Then came the onslaught of non-white invaders, ludicrously referred to as “refugees” by the anti-white establishment and media, which is taking place at hitherto unprecedented proportions.

These events revealed a chasm within the white world in general and within Europe in particular. It became most apparent in the drastically different reactions of Eastern and Western Europeans to the “refugee crisis.” Western European leaders accepted the invaders with open arms. Several Eastern European leaders, however, took a clear and firm stance against the invasion, Hungarian prime minister Viktor Orbán being the most vocal. Anti-immigration marches attracting many thousands of people have taken place in many Eastern European cities. Although there is increasing resistance in Western Europe, for the time being it cannot reach the levels observed in the east.

What is more heartening is that Eastern Europeans are very well aware (much more so than their western counterparts) of the true nature of the problem – i.e., that it is not a cultural problem, but rather a racial one, and they are more frank about it in their conversations. Even many on the political Left are racially aware and would be classified as “racist” and “extreme-Right” in the West.

Another heartening sign is the development of a pan-European identity among Eastern Europeans. Although individual countries are rather shamefully trying to fob off unwanted refugees on their neighbors, there is an increasing awareness that this is a problem for Europe as a whole, and that the EU does not have Europe’s common interests at heart. The recently re-emerged military threat from Russia and pressure from the EU to accept non-white immigrants have brought Eastern Europeans closer together and imbued them with a sense of common destiny. They are increasingly aware that more than just the future of their countries is at stake; what is at stake is the future of European civilization, the future of white race. There is an emerging awareness that by opposing non-white immigration, they are also contributing to the salvation of Europe and the white race. Pro-white solidarity shown by Latvians in an anti-immigration march in Riga.

All in all, in present-day Europe, Eastern Europeans possess the healthiest instincts and the soundest understanding regarding the race problem, the Russian threat, and the dangers of American, NATO, and EU hegemony.

Eastern Europeans look towards the West as something to emulate. They are attracted to its high living standards and rule of law, all of which they regard (and correctly so) as essentially manifestations of whiteness. For the most part, their attraction to liberalism and democracy is not rooted in degeneracy, as sadly misunderstood by many western nationalists. Instead, they regard liberalism and democracy as essentially white-European values. By adopting liberalism, they see themselves as spiritually joining their white cousins in the West.

This change of attitude is essential and is already occurring. However, it is not enough by itself. This new attitude will only become effective if it becomes the animating principle of a new political power bloc.  Eastern Europe must come together and form a formidable political entity, an alternative to both Euroasiatic Russia and the Atlanticist West. Thus I propose the revival of the idea of a Baltic-Black Sea Union, or “Intermarium [4],” as originally put forward by Polish leader Józef Piłsudski. Ideally, the Intermarium bloc should encompass the following nations, roughly from North to South:

With a total population of 178 million mostly European people (compared to Russian’s population of 143 million, many of whom are non-European), Intermarium could be enormously powerful and largely self-sufficient, given proper investment in infrastructure and armaments. This would effectively eliminate Eastern Europe’s dependence upon U.S. and Western Europe for security. Intermarium would be able to pursue its own independent policy, both internally and externally. It would be a genuine geopolitical counterweight to both Russia and the West.

Having consolidated its power and attained its security, Intermarium would inevitably gain many supporters and sympathizers, both in the West and in Russia. There are already many Russian dissidents immigrating to Ukraine. There are even many Russian nationalists fighting on the Ukrainian side. Western nationalists, many of whom are still deluded about Russia, will finally understand that the greatest hope for white revival and salvation of Europe lies not in Russia, but in Eastern Europe. They will not have to grovel towards Russia anymore and will not have to convince themselves, through strenuous mental gymnastics, that Putin, who jails true Russian nationalists, outlaws World War II revisionism and “Nazi propaganda,” reveres the Soviet past, and condemns “racism” and “Nazism” at every opportunity, is somehow our “secret friend.” A united Eastern Europe, however, will not be our “secret” friend; it will be our real friend. Unlike most Russians, who actually gloat over Europe being swarmed by non-white invaders, Eastern Europeans truly empathize with the struggle of their western cousins.

Apart from gaining many sympathizers outside of its territories, Intermarium will also act as a magnet for all those possessing a white racial consciousness and European identity. One can foresee a change in immigration patterns. More and more westerners, and also Russians, will opt for settling in Intermarium. They will actually be the real refugees, fleeing their increasingly chaotic, corrupt, multi-racial, and anti-white societies, bringing their valuable skills and expertise to Eastern Europe. This will give further boost to Intermarium’s technological, economic, and political development, increasing its clout in international relations and thereby accelerating the spread of pro-white ideas from its territory throughout the entire white world.

A Baltic-Black Sea Union can take different forms. It can be a centralized entity or a loose confederation, with different gradations between these two options possible. Needless to say, it will not be limited to current EU member states, but will include Ukraine and Belarus as important integral parts – heirs to the ancient Kievan Rus.

Intermarium should also be open to accepting Western European countries. One can already foresee that western countries with strong nationalist movements – e.g., Austria, Denmark, and Finland — might wish to join this union. It would also be ironic (but by no means unrealistic) if the former eastern German states would choose to secede from Germany and join Intermarium as well.

The greatest danger to Intermarium are the simmering ethnic conflicts throughout Eastern Europe. There are Polish minorities in Lithuania, Belarus, and Ukraine. There are Lithuanians in Poland. There are Hungarians in Slovakia, Serbia, Ukraine, and Romania. And so forth. An Intermarium united by a vision of a common destiny and struggle could provide a framework to settle these problems.

Eastern Europeans should remember that the main reason for the collapse of the Polish-Lithuanian Commonwealth was contention between different parts of nobility and skirmishes between different nationalities populating that political union. Whereas the peoples of Poland, Lithuania, and the ancient Kievan Rus wallowed in destructive infighting, the main enemy, Russia, assaulted them as a strongly consolidated power, eventually subduing them all. The mistakes of the past should not be repeated.

Eastern Europe has long been the object of history, a plaything of extra-European powers. Eastern Europe needs to recognize that it is racially and culturally the healthiest part of Europe. Therefore, it should lead, not follow. It must cease being the object and finally become the subject of history, thereby becoming the harbinger of a bright future for the whole white race. The Intermarium bloc, the Baltic-Black Sea Union, is the only effective way to achieve this.