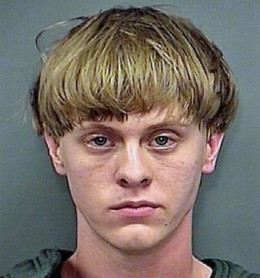 Blacks and whites have shared North America for almost 400 years, and race relations are getting worse rather than better. If this were a marriage, we would have filed for divorce long ago. Thus the New Right stands for the principle of racial divorce [2]. It is time for whites and blacks to go our separate ways and pursue their our own destinies. We stand for the creation of separate racially homogeneous societies, through the peaceful and humane process [3] of redrawing borders and shifting populations.

Third, Roof’s “solution” to his rage and alienation — killing innocent people — just makes the racial situation worse rather than better. There is no evidence so far that Roof was affiliated with or influenced by any white racialist group. But his actions certainly resemble those of racially-motivated spree killers like Anders Behring Breivik [4], Wade Michael Page [5], and Frazier Glenn Miller [6], all of whom are products of what I call “Old Right” thinking.

Given that reason, science, and history are all on our side, and the greatest apparatus of coercion and brainwashing in human history is on the enemy’s side, doesn’t it make sense to attack the enemy at his weakest point rather than at his strongest? This is why the North American New Right pursues White Nationalism through intellectual and cultural means: we critique the hegemony [7] of anti-white ideas and seek to establish a counter-hegemony of pro-white ideas.

Only a fool picks a battle he cannot win, and we cannot win with violence [8]. Fortunately, we don’t have to. The Left lost the Cold War but won the peace through the establishment of intellectual and cultural hegemony. We can beat them the same way, and we don’t have to all be rocket scientists to do it, since anyone of even moderate intelligence can make real progress by simply repeating Bob Whitaker’s talking points about white genocide.

I wish I could erect a wall between myself and the kind of unstable, undisciplined people who go on killing sprees, but you can’t change the world from a bunker. Thus responsible white advocates need to adopt the next best course of action: (1) we must be alert to the signs of mental instability and inclinations toward violence and rigorously screen out such people, and (2) we need draw clear, unambiguous intellectual lines between New Right and Old Right approaches [9].

I just hope I don’t have to do this often. But apparently it will be often enough that I have been able to dust off one of my previous spree-killer essays [5] and merely change a few particulars.