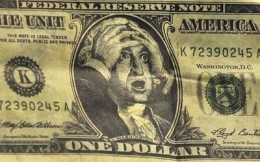 [1]Back at the beginning of 2012, I stuck my neck out a bit by writing an article on economics, “Money for Nothing [2]” (audio version here [3]), in which I offered my take on Social Credit theory. The subsequent discussion thread, as well as private communications with Social Credit experts, convinced me that I was on the right track. So every once and a while, I am emboldened again to offer some economic heresies for discussion [4]. Today is one of those days.

Along with writers like Kerry Bolton, Counter-Currents is doing its part to recover the rich tradition of Right-wing alternatives to capitalism [5], including Social Credit, Guild Socialism, Populism, and Distributism. The Right, particularly in the United States, desperately needs to break away from free market economic orthodoxy. Simply because it makes us stupid and evil.