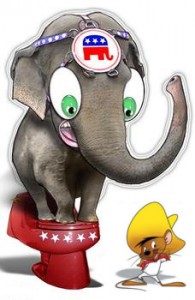 The Republican Party lost because the rising tide of color demographically dooms its geriatric, out-of-touch, and dwindling base. In order to win, it needs to embrace amnesty, engage in outreach to America’s exciting and dynamic Hispanic, black, Asian, and Pacific Islander youths, and openly renounce its radical fringe. It must take a stand against the racist and extremist elements in its party which would decrease the rate of immigration, deport people who illegally immigrate, and turn back the clock on the civil rights victories of the Obama administration.

Marco Rubio is prepared to serve up austerity policies with a zesty Latin flavor. Mia Love is on deck to connect with family values voters from a Mormon female Haitian refugee’s perspective. Michael Steele’s rejected effort to refashion the GOP as the hip-hop party [2] of Reconstruction negro domination is looking like a lost opportunity. The votes have been counted, the verdict is in, and whites are old news. The leading luminaries of the GOP elite, the mainstream media, and the think tank crowd are united behind a clear vision: the vision of descending on America’s ethnic ghettos to take away their mobile phones, their food stamps, their health care, their street drugs . . . and their votes. As we discussed in our recent Post-Election Round Table [3], the election results could not have delivered us a better outcome. The system has a hostile Black face on it and the party they’re trained to turn to for salvation is going to be going out of its way to insult, alienate, and betray them. Yankees have chosen the n****r [4] and thrown the noble Confederacy under the bus, whipping up regional discord.  Sure, there will be some laws and court rulings which will put further stress and pressure on our folk. But if you think there’s any hope of achieving our bare minimum objectives through laws and court rulings, then you have some more learning to do.

There’s just one little problem: it’s not actually true. While the demographic crisis is real, it’s mitigated by a series of factors. Whites are older, so they vote more. Whites tend to vote more, even when accounting for differences in income, education, and age. According to the census projections, whites won’t be a minority in the United States until 2042, and will remain the majority of the electorate for a few years after that. At the current rate of displacement, our youngest readers will be elderly retirees (presuming they have the luxury of retirement) before the GOP is actually in a situation where it makes more sense to reach out to minorities than to appeal more effectively to white voters.

With the exception of three New England strongholds and Iowa [5], every state — including the overwhelming majority of Northern states — the White voters who voted favored Mitt Romney. Problem is, Whites stayed home. According to RCP’s The Case of the Missing White Voters [6] . . .

[T]he 2012 elections actually weren’t about a demographic explosion with non-white voters. Instead, they were about a large group of white voters not showing up.

Assuming the 72/13/10/5 percentage split described above for 2012, that would equate to about 91.6 million votes cast by whites, 16.6 million by blacks, 12.7 million by Latinos, with the balance of 6.3 million votes spread among other groups.

Mitt Romney lost because he failed to connect with his base. He lost because the white working class deeply distrusted this absurd parody of cannibal capitalism run amok. While myriad factors go into the final tally, and creeping demographic changes didn’t do the GOP any favors, the precipitous drop in white turnout was the single greatest statistical difference between this and previous elections. If the GOP started pitching a more populist message and pursued the Sailer Strategy [7], reaching out to rather than antagonizing its white working class base, it would be able to look forward to decades of success. Had the same number of white voters cast ballots in 2012 as did in 2008, the 2012 electorate would have been about 74 percent white, 12 percent black, and 9 percent Latino (the same result occurs if you build in expectations for population growth among all these groups). In other words, the reason this electorate looked so different from the 2008 electorate is almost entirely attributable to white voters staying home. The other groups increased their vote, but by less than we would have expected simply from population growth.

Fortunately, we can trust that this article and its facts will be stuffed down the memory hole. The GOP’s Hispanic Panic is assuredly irreversible at this point. This reality, the reality that the conservative political status quo is not imminently doomed by demographic displacement and Yankee race traitors, will get to be our little secret. The Republican Party is stampeding over a cliff and will drive a fresh new wave of supporters out of kosher politics and into our orbit.