Toward the White Republic 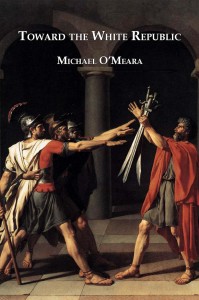 Praise for Toward the White Republic:

“Just as in medieval times it was considered high treason to speak of the death of the king, in the United States it is taboo to contemplate the break-up of the ‘one nation, indivisible.’ Yet in this slim volume of essays Michael O’Meara argues that if the white race is to survive on this continent, the American Empire must perish. Secession is rising from the ashes of 1865, and O’Meara is one of its leading prophets.”
— H. A. Covington, author of the Northwest Quartet

“Michael O’Meara is a thinker of great depth and a writer of extraordinary skill. He is impressively erudite, yet in these essays he wears his learning lightly. He is not a pedant trying to dazzle his readers with arcane and esoteric verbiage. He is a revolutionary, who wants to change the world. His idea of the White Republic as the mythic source and aim of radical cultural-racial regeneration may seem too romantic and too risky to the older generation of American paleo-conservatives and European ethno-nationalists. But if the white man is to retrieve his destiny, it is the only way.”
— Tomislav Sunic, author of Homo americanus