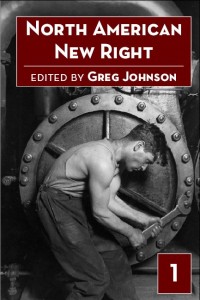 There are three formats for North American New Right, volume 1:

NOTE: The hardcover edition of NANR is so expensive because it is a premium available to donors who give more than $120 in a given year. If you have already given such a donation, you already own a copy.

“The Overman High Culture & the Future of the West”
Ted Sallis

“What is to be Done?”
Michael O’Meara & John Schneider

“’The Flash in the Pan’: Fascism & Fascist Insignia in the Spy Spoofs of the 1960s”
Jef Costello

Michael Polignano’s Taking Our Own Side
Kevin MacDonald

Greg Johnson, Ph.D., Editor-in-Chief of Counter-Currents Publishing Ltd. and Editor of the annual journal North American New Right. From 2007 to 2010 he was Editor of The Occidental Quarterly. In 2009, he created TOQ Online with Michael J. Polignano and was its Editor for its first year.

He is the author of Confessions of a Reluctant Hater (San Francisco: Counter-Currents, 2010).