Hold Back This Day 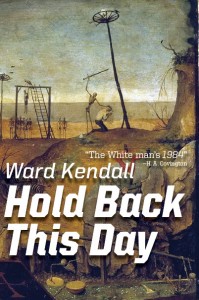 Ward Kendall’s Hold Back This Day is a dystopian science fiction novel about a future in which a totalitarian world government promotes universal miscegenation to eliminate all racial differences — in the name of diversity, of course.

Hold Back This Day tells the story of how Jeff Huxton, one white man standing on the brink of our race’s extinction, regained his racial consciousness and pride and began to fight back.

Hold Back This Day is a fast-paced, highly entertaining, yet deeply serious and subversive novel of ideas.

First published in 2001, Hold Back This Day was written as a prophecy of the 22nd century. Only ten years later, it reads more like a history of our own. Long out of print and fetching ridiculous prices on the used market, Hold Back This Day is now available again in handsome hardcover and trade paperback editions from Counter-Currents.

Advance Praise for the Second Edition of Hold Back This Day

“Ward Kendall has written the White man’s 1984, with a generous dose of Brave New World and an ending right out of Robert A. Heinlein. White men may have been rendered completely powerless in this society, but as long as they can still write first-rate fiction they have a voice, and Kendall is such a voice.”

—H. A. Covington, author of The Northwest Quartet

“Young people today consume steady diets of sci-fi, smut, and gore. It is not my cup of tea. But the explicitly racial topics and themes so abundant in this novel may strike a chord with young whites struggling for a sense of identity in today’s racial chaos. For in places all over America, the day has already come when young whites feel themselves to be racial freaks slated for extinction.”

“In Hold Back This Day, Ward Kendall writes in the grand tradition of dystopian fiction. Kendall presents us with a world in which many of our day’s trendy ideologies (mandated multiculturalism, media-promoted miscegenation, and militant racial egalitarianism, among others) are taken to a vicious and horrifying, but not entirely illogical, extreme. The really frightening thing about Kendall’s book is the plausibility of his scenario, if present trends continue.”

—Andy Nowicki, author of The Columbine Pilgrim and Considering Suicide

“Kendall projects the equality project of the Left to its ultimate conclusion: a clinically depressive and stomach-churning future of planned extinction, universal poverty, and social degradation, built on cowardice, fuelled by envy, and defined by mediocrity. It seems a doomsday asteroid or a thermonuclear holocaust would be preferable to this.”

“I am so excited to find out that this wonderful book is available again. I highly recommend Hold Back This Day for young people in their late teens to early 20s, although I enjoyed it immensely in my 30s. I am going to make sure that every young person I know gets a chance to order this book.”

Praise for the First Edition of Hold Back This Day

Ward Kendall is a novelist living in California. He is the father of two teenage daughters. His second novel, The Towers of Eden, was published in 2002.