Son of Trevor Lynch’s White Nationalist Guide to the Movies 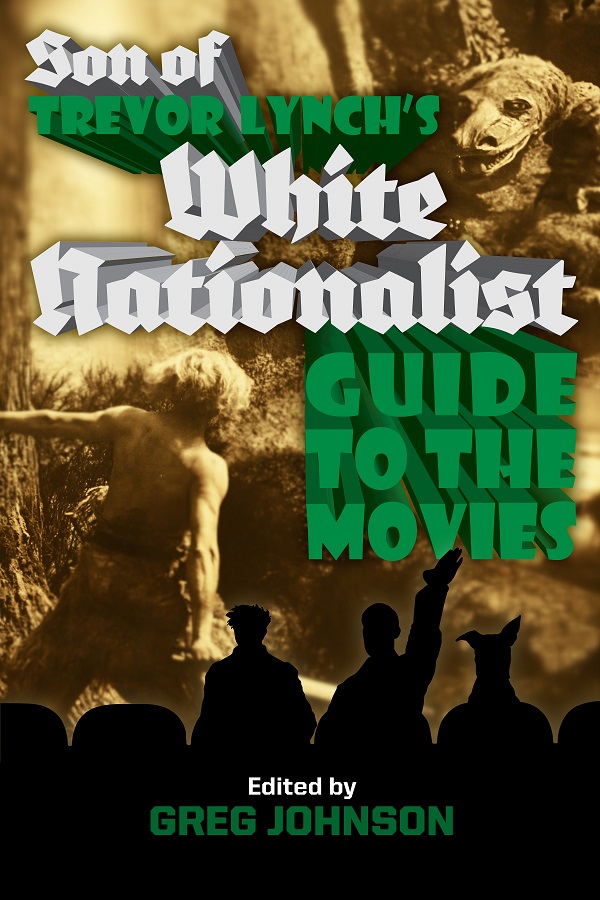 Son of Trevor Lynch’s White Nationalist Guide to the Movies

About Son of Trevor Lynch’s White Nationalist Guide to the Movies:

Since 2001, Trevor Lynch’s witty, pugnacious, and profound film essays and reviews have developed a wide following among cinephiles and White Nationalists alike. Lynch deals frankly with the anti-white bias and Jewish agenda of many mainstream films, but he is even more interested in discerning positive racial messages and values, sometimes in the most unlikely places.

Son of Trevor Lynch’s White Nationalist Guide to the Movies is his second collection of essays and reviews, covering 51 movies and 4 television shows, spanning a 14-year period, from his very first review (Mulholland Drive) to his last to date (The Hobbit: The Battle of Five Armies).

Return of Trevor Lynch’s White Nationalist Guide to the Movies cements its author’s status as a leading cultural critic of the North American New Right.

“Trevor Lynch provides us with a highly literate, insightful, and even philosophical perspective on film—one that will send you running to the video rental store for a look at some very worthwhile movies—although he is also quite willing to tell you what not to see. He sees movies without the usual blinders. He is quite aware that because Hollywood is controlled by Jews, one must typically analyze movies for their propaganda value in the project of white dispossession. Trevor Lynch’s collection is a must read for anyone attempting to understand the deep undercurrents of the contemporary culture of the West.”

“Hollywood has been deconstructing the white race for nearly a century. Now Trevor Lynch is fighting back, deconstructing Hollywood from a White Nationalist point of view. But these essays are not just of interest to White Nationalists. . . . These essays combine a cultural and philosophical sophistication beyond anything in film studies today with a lucid, accessible, and entertaining prose style. Every serious cineaste needs to read this book.”

“This is not some collection of vein-popping rants about Hollywood’s political agendas. It’s a thoughtful and engaging examination of ideas in popular films from a perspective you won’t find in your local newspaper or in Entertainment Weekly. Lynch has chosen films that—in many cases—he actually enjoyed, and playfully teased out the New Right themes that mainstream reviewers can only afford to address with a careful measure of scorn. How many trees have been felled to print all of the Marxist, feminist, minority-pandering ‘critiques’ of contemporary celluloid over the past fifty years? Isn’t it about time we read an explicitly white review of The Fellowship of the Ring, or Traditionalist take on take on The Dark Knight?”

—Jack Donovan, author of A Sky Without Eagles

“Hunter Thompson said that Las Vegas was ‘what the whole hep world would be doing Saturday night if the Nazis had won the War.’ Like liberalism, that’s clever but wrong. If the Good Guys had won, we ‘hepsters’ would be at the movies, experiencing the ultimate art form, but made by racially aware white artists, not today’s Hollywood culture-distorters. This book is the next best thing: Trevor Lynch reviews today’s films from an artistically sensitive, culturally informed, but most of all unfailingly pro-white perspective. He doesn’t just warn you away from the obviously bad, but explains how the poison works and where it comes from, and even finds racially uplifting stuff where you’d least expect it—Pulp Fiction? Read it, and you’ll never feel the need to pay good money to be seen weeping at another Holocaust movie again.”

“What I find most remarkable about Trevor Lynch’s writings on film is his ability to use philosophy to illuminate film, and vice-versa, with an intellectual virtuosity and lucidity of style that blows away anything in the vast Open Court and Blackwell series of Philosophy and Popular Culture books.”

“‘Trevor Lynch’ is not precisely a real person himself. Rather, he is the alter-ego of a tiresome and self-important fellow named Greg Johnson who runs a vastly pretentious website called Counter-Currents.com . . . . Lynch/Johnson . . . might be considered shocking, if only he weren’t such a bore. A consummate nerd and self-described “LOTR [Lord of the Rings] fanatic,” he’s the kind of guy who finds himself at parties at which ‘Pulp Fiction’ is described as a film about ‘greatness of soul at the end of history,’ and who complains as lustily about ‘lowbrow’ appropriation of the term ‘postmodern’ as he does about the supposed Jewish scheme to undermine ‘higher morality’ by putting ‘dangerous truths’ ‘in the mouths of monsters’ like the racist skinheads of ‘American History X’.”

“The most bizarre of the white supremacist titles, though, is Trevor Lynch’s White Nationalist Guide to the Movies. . . . Mr Lynch’s review of summer blockbuster ‘Django Unchained’ calls it ‘another Jewish wet dream’ before saying that ‘hateful fantasies about teaming up with blacks to harm whites are staples of the Jewish imagination.’”