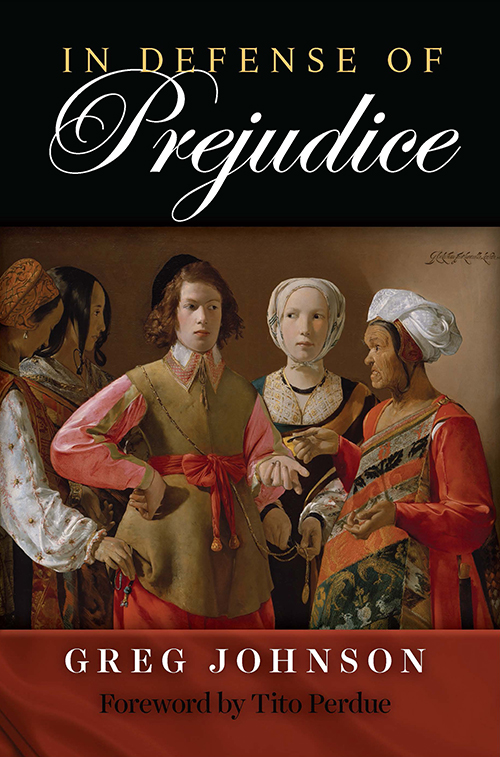 About In Defense of Prejudice

Praise for In Defense of Prejudice

“Greg Johnson became my favorite writer several years ago when it first dawned on me that my brain was suddenly comprehending everything that he wrote. Subjects which had previously seemed too complex and stuffy for my cranial load limit suddenly made sense when Greg explained them. Not only that, but these complex ideas now demystified were fresh, exciting, and riveting to read. And that, my friends, is the mark not just of a good writer, but of a great writer. What has this to do with Greg’s most recent book, In Defense of Prejudice? Well, in a word, if one cannot understand revolutionary ideas one cannot act on them. Put another way, it is hard to move forward if one cannot see ahead. In this important anthology of novel ideas, Greg allows me to see ahead with clarity and focus. And what I see ahead for the future of White Nationhood is extremely exciting.”

“Very soon we will have to put equality behind us if our civilization, the one that has given more to life on this planet than all other civilizations added up together, is to persist. Is quality more precious than quantity, or will post-modern anomie run its course unhindered? It is therefore those who, like Greg Johnson, are already assembling the intellectual foundations of a new dispensation who must be seen as our most valuable and essential persons, men of mind and spirit capable of capsizing a doctrine that delights the worst and marginalizes the best, our present system in other words.”

—Tito Perdue, from the Foreword

“Greg Johnson provides fresh, topical commentary upon the political sea change we’re in the midst of. Many of these essays were written in recent months. You get insightful dissections of Brexit, Calexit, Alt Right vs. Alt Light, the ‘Milo Problem,’ the fall of Hillary Clinton, and the rise of Donald Trump. But there are also slightly older, evergreen essays that will stand up well for many years on such topics as the rationality of prejudice, the legitimacy and limits of cosmopolitanism, Céline, Leo Strauss, and the neocons, plus poignant memories of Jonathan Bowden and William Pierce. This is an engaging and rewarding read.”

“The problem with so much ideological writing is that it can easily become a stagnant space of hammer-and-nail commentary. It is tiresome to read (and to write, for that matter). Year after year, Greg Johnson finds a way to break that cycle, and his fourth anthology keeps that momentum going. Ever present is that crucial reminder that to win we will need to do more than tinker with a few policy levers; we really do need to think out of the box about every issue if we want change.”

“It is a rare thing to be both a thinker and a man of action, rarer still to be able to focus with a laser-like precision on what is of supreme importance, yet still rarer to be able to both inspire and to give eminently practical advice on such matters, and to do this on all levels. The essays in this volume—covering a wide spectrum, from doxing, to not punching right, to issues in philosophy— have deeply impressed me. I have read very little elsewhere that is so measured, carefully thought out, and so useful to our movement.”

“Greg Johnson’s In Defense of Prejudice, while continuing the work of his prior volumes, is a self-contained and multi-faceted corpus. The collection of essays is valuable in being a coherent mixture of thought, deed, and strategy. He offers a rare combination of practical and intellectual insights. Of particular interest are some tentative thoughts on a question that has remained surprisingly elusive among the ‘Right,’ and seldom asked because of the character of the USA from its very foundations: what exactly is an ‘American’? That question has acquired new significance with the election of President Trump. Dr. Johnson’s examination of that phenomenon brings the reader up-to-the moment, while suggesting much else that he will, I am certain, address in further essays.”

“The essays in In Defense of Prejudice are infinitely readable and accessible, erudite and sublime—a boon of clear and convincing thought. Greg Johnson reaffirms his status as the leading intellectual of the North American New Right.”

—Leo Yankevich, author of The Hypocrisies of Heaven

“Greg Johnson is a treasure to those who know and appreciate his work. This is real White Nationalism pared down to its purest, stripped of the sophistry, self-aggrandizement, and self-deception that all honest causes attract. The ‘North American New Right’ isn’t ‘New’ in the sense of a consumer product doomed to become obsolete when the current year expires. It’s a new and renewed effort in the present to synthesize the best of the Old Right from the past, and forge a robust framework for the future. Greg’s writing is graceful, light, and accessible, yet deftly deals with pressing issues. This book will give you firm footing in a topsy-transturvy world, an iron defense against all those on all sides who would have you believe we cannot win. Persistence leads to final triumph!”

“Imagine an angelic looking guy in leather pants named Peter Probabilistic who is the lead singer in a super group called the Inductive Generalizations. Then imagine you’re one of thousands of excited fans who have filled a stadium to see them perform songs from their new chart topper In Defense of Prejudice. In what sort of world would a concert like this be happening? If your answer is Disney World® that’s wrong. Find out exactly how wrong in this new collection of essays by Greg Johnson.”

The Jewish Question
37. Louis-Ferdinand Céline’s Trifles for a Massacre—193
38. Paul Gottfried’s Leo Strauss & the Conservative Movement in America—198
39. What the Neocons Got Right: A Review of Arguing the World—211
40. The Self-Exterminating Jew: Gilad Atzmon’s The Wandering Who?—216
41. Yoav Shamir’s Defamation—227