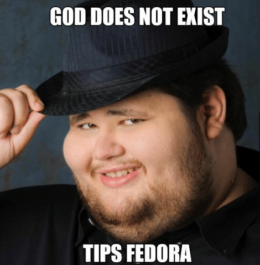 In the distant and ancient era we now call the “mid-2000s,” there arose a phenomenon we now call New Atheism. New Atheism was militant; its adherents not only rejected religion, but actively sought to expurgate it from society, usually by haranguing the religious online. The idea was for humanity to reject all irrationality, delusion, and superstition and bring about an era of enlightenment and progress through reason and evidence.

» Universities & the Smell of Dead Fish