Kathleen Casillo Did Nothing Wrong
. . . but What If She Did? 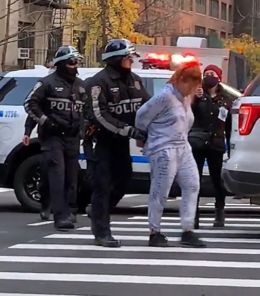 Kathleen Casillo being arrested in 2020.

If there is any person in today’s news cycle who deserves our stunned appreciation, it is Kathleen Casillo. Her story is fairly simple, but one that is uniquely demonstrative of the degenerate nature of our times. On December 11, 2020, she was driving with her 29-year-old daughter in New York City, where she encountered a Black Lives Matter protest — or rather I should write “protest,” because BLM apparently wasn’t protesting so much as blocking traffic and terrorizing white drivers.

Casillo claims that BLM people called her a “white privilege bitch” while banging violently on her car and pulling on the doors. Terrified, she hit the gas and plowed into a crowd of them. Nine were injured and, fortunately, no one was killed.

Casillo, who until then had a squeaky-clean record, was arrested and charged with reckless assault. She later claimed she meant no harm. From the Daily Mail:

‘I feel sick,’ she continued, noting: ‘I never intended on hurting anyone. I just feared for my daughter’s life more than anybody. I thought they were going to pull her out of the car.’

‘It didn’t look like a protest,’ Dominique recounted. ‘It was more like being attacked by random people who were being menaces.’

She alleged that the people who were attacking the car ‘weren’t really part of the protest,’ as the actual protest ‘was a block up.

‘They were just lingering and pulled out of nowhere before we stopped the car,’ Dominique said. ‘We waited, watched the light turn green [then] red.

‘We waited a long time, and they were just there like this, doing nothing.

‘Then they walked away just a little bit so we could move,’ she alleges. ‘We started driving and they started attacking the car. So naturally we stopped again, and that’s when they started hitting [the] car, cursing us out. I was really scared honestly.

‘Finally there was a bit that actually cracked the window open on my side and that’s when my mother started to roll,’ Dominique said. ‘We said we have to get out of here because they’re not going to stop.’

So far, so terrible. We all know that BLM is a violent and subversive organization which our anti-white elites indulge and protect. We also know what happens when you cross these elites. Since Casillo’s arrest, she and her family have received numerous death threats, and police have been forced to guard her home. She was slammed as a racist on social media, and screenshots of her Facebook and Instagram accounts — which revealed her support for Donald Trump and Rudy Giuliani — were shared all over the Internet. The poor woman needed a police escort when she appeared in Manhattan Criminal Court last year due to the potentially violent “protesters” outside. For the sin of protecting herself and her daughter from BLM thugs, Kathleen Casillo has essentially had her life turned upside down.

What’s interesting, however, is that Casillo has not bowed to the beast. Instead of taking a plea deal, which includes a one-year driver’s license suspension and six hours of community service, she has insisted on going to a jury trial, where she faces up to seven years in prison if found guilty. She has rejected this plea deal twice, most recently just a few a days ago.

Her reason is as quaint as it is noble: “I’m going to court to clear my name because I’m not guilty.”

She also professes not to be racist:

But Casillo has denied claims of racism, telling DailyMail.com in December: ‘One of my closest friends is a woman of color, from when I was 19-years-old, so it’s not a black, white thing.

‘I don’t even know the color of the people that I hit,’ she continued. ‘It was all mixed.’

Her attorneys have rejected claims that Casillo is racist and intentionally hit the protesters, calling it a ‘false narrative’ that is ‘without merit and deeply disturbing,’ and hope she will get a fair trial.

Kathleen Casillo of course deserves our moral support, at the very least. She is taking a great risk to bloody the nose of the anti-white establishment. But she doesn’t have to do this. She could have taken the easy way out. She could have picked up the pieces of her life and slinked away relatively unscathed. Instead, however, she has decided to fight. And good for her. I didn’t find any account for her on GoFundMe or GiveSendGo, so maybe she has the means to defend herself (and God bless her if she does).

Her circumstances, however, are special enough to lead us to the following thought experiment: What if the next person who gets car-saulted by a gang of thuggish blacks and their compatriots is in fact racist — or, more accurately, a race realist? We all know the statistics. We all know the color of crime. We all know the odds of earning a one-way ticket to paradise or the emergency room skyrocket when one is around a certain kind of black — especially when large numbers of them try to smash the car windows while screaming racial epithets at you. So it makes perfect sense to fear them in such uncontrolled circumstances.

But how will this race-realist argument hold up in court, let alone with public opinion?

“Gee, Your Honor, according to recent FBI data, blacks in the United States were six times more likely than non-blacks to commit a homicide, and 12 times more likely to murder someone of another race. Since most of my assailants at the time were black, the most judicious option was therefore to abscond as expeditiously as possible. And since the most direct route between two points is a straight line . . .”

In fact, hitting that gas pedal due to race realism makes more sense than hitting it in spite of one’s race romanticism, like Kathleen Casillo supposedly did. Maybe that’s the reason why such an argument drives the public bananas. It’s a little too much truth for some to handle, especially if that truth threatens the delicate power coalition the Left has cobbled together against big, bad whitey. Because that’s what this is all about. The Left tolerates blacks’ bad behavior in exchange for votes and their dominating the prison population enough to make civil disobedience a dead letter on the Right.

And given that the majority of the victims of black crime are other blacks, this sounds like a win-win for the Left.

Yes, it is good that Kathleen Casillo is taking the fight to the Left, and I dearly hope she wins. By denying both the esoteric and exoteric charges against her, she is most likely following the best strategy for an acquittal. And for all we know, she may actually mean it when she says she’s not racist.

Regardless of the trial’s outcome, however, not much can possibly change from it. This is because Casillo will be defending herself not so much by proving she didn’t recklessly assault anyone, but by proving she didn’t commit the greater crime of racism. That’s what’s really on the docket here.

When a person in Kathleen Casillo’s shoes can stand in front of a judge and jury and tell the truth about black people — the statistical, psychometric, and biological truth — and still receive a fair hearing and not get lynched the moment she exits the courthouse, our civilization will be well on its way to recovery.

Until then, white motorists should avoid BLM demonstrations like the plague that they are. Either that or master the art of the three-point turn.

» The Problem of Gentile Zionism