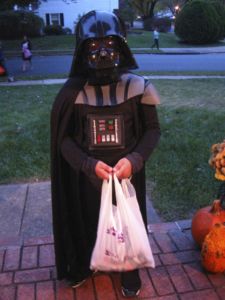 I have always cherished the pretense of Halloween. Regardless of its pagan origins in Europe as a harvest celebration, the event I have always known presents an exciting chance for children to dress up and pretend, and for adults to play along. The candy and trick-or-treating is important, of course, but secondary, in my opinion, to the spectacle of it all. As a child, deciding what I would be for Halloween each year took a great deal of thought and preparation (for several years, my mother had insisted we make our own costumes from scratch — a fun and productive exercise). I am gratified to see the same excitement in my own children as they look forward to playing dress-up and gorging on candy once a year. Halloween has proven to be a wonderful opportunity to take photos and make memories. Just because such a sentiment is trite doesn’t make it any less true. I am sure many parents reading this would agree.

Halloween doesn’t have to be scary. Today, its festival atmosphere requires only that the child make an effort and have fun. (One year, my son dressed up as a vending machine he had made out of cardboard — and I am still waiting on some enterprising kid to dress up as Santa Claus for Halloween and go ho-ho-hoing instead of trick-or-treating. That would certainly lead to some amusing exchanges on people’s doorsteps.) Still, however, the pretense of scariness remains a major part of Halloween’s charm. Witches, goblins, vampires, skeletons clawing their way out of shallow graves — we all know the common tropes. And it is always a delight to see our children, still ensconced in their natural innocence, pretending to be supernatural villains from fairy tales, legends, and movies.

One memory I will always treasure is from when two girls came to our house as Winnie the Pooh and Eeyore. They were a pair of bright-faced, ten-year-old kids who were clearly excited to go trick-or-treating. As I opened the door, they both yelled, “Trick or treat!” behind toothy grins. I squinted discerningly at Pooh and asked, “Who are you supposed to be?”

“I’m Winnie the Pooh!” the girl said with a bright smile.

I nodded approvingly and dropped some candy in her bag. Then I turned slowly to the other girl, preparing a joke I had in mind. “And who are you supposed to be?” I asked, this time tinting my question with mock suspicion.

“I’m Eeyore!” she exclaimed just as exuberantly as the first.

I shook my head and wagged my finger. “No,” I declared. “No child trick-or-treating at my house dressed as Eeyore will talk to me like that! Now, let’s try this again!”

I slammed the door in their faces, and then opened it seconds later, looking expectantly at Eeyore. A bright girl, she took the cue and assumed Eeyore’s famous hangdog expression. After a deep, enervated sigh, she muttered, “Trick or treat.”

“And who are you supposed to be?” I asked.

She slumped despondently and sighed again, as if this whole trick-or-treat business was nothing but a pointless, boring chore. “I’m Eeyore,” she groaned.

“That’s more like it,” I said as I dropped a double helping of candy into her bag. Winnie the Pooh spotted this and held her bag out for more as well, and I duly obliged, wishing both girls a good night.

For me, this is what Halloween is all about: the dressing up, the playacting, the fun.

About 15 years ago, however, we had just moved to a town which was nearly 50% black. Few blacks lived near us — certainly not within walking distance — but that didn’t stop moms, dads, and whoever else from driving their kids into our neighborhood to take part in trick-or-treating. This was something which never happened in my all-white town growing up. Us kids did a circuit around the neighborhood, and that was that (which was plenty). Parents certainly never trucked their kids around anywhere on Halloween. But in that half-black town where I now lived as an adult, that’s exactly what happened.

It was totally fine at first. Most of these itinerant trick-or-treaters were young and accompanied by grownups (or the next closest thing). Most importantly, they were dressed up and excited. I’m always happy to shell out candy to any kid who appreciates the spirit of Halloween. As the night wore on, however, the kids became older and costumes less common. In chattering gaggles, they would dart from house to house and then jump back in their ride and go zooming off. Clearly, these kids (who were, without exception, black) were in it only for the free candy. They would appear in slovenly dress and mumble while holding out pillowcases for their loot. These were high school-aged kids, much older than any of our local visitors — old enough, presumably, to no longer be enamored with candy, or to at least be able to buy it for themselves.

On this Halloween night, I was about to shut off the lights and effects and call it an evening when I heard a knock on the door. I opened it to find a lone black male: tall, well-built, and like many others before him, not dressed up for Halloween. He was probably 16 or 17. He held out a pillowcase, and I cannot remember whether he said “Trick or treat.” But I do remember thinking that even if this guy didn’t have a knife or club on him, he could still have pushed his way into my house and destroyed my entire family, myself included. He was a big guy.

I felt a stab of fear, which lasted a moment or two, before I realized that the kid meant no harm. Like the rest of them, he was just neighborhood-hopping for free candy. Wordlessly, I selected two of the worst pieces of candy we had (rejected from my young son’s haul earlier in the evening) and dropped them in his bag. After that, we never kept the light on past eight o’clock — something I don’t remember having to do when I was young.

This touches on the nature of that which is frightening. It seems that what truly terrifies us are things we don’t talk about. Colleagues, friends, relatives, and spouses are more likely discuss fears of a market downturn, the possibility of losing employment, serious health issues, impending war, and other frightening topics, because discussing such topics doesn’t isolate one from society, and are therefore not very frightening. It seems that many people would rather die in good standing with the group to which they belong than live as an outcast from that very same group. It also seems that many people would rather silently consent to cultural degeneration than risk banishment by resisting it.

To complain about black crime, to profess to be frightened in the presence of a strange black male, or to notice patterns in blacks’ behavior which reflect poorly upon them as a group is to court banishment from today’s society — as well as character assassination, deplatforming, and cancelation. These are terrifying things; more terrifying for many, I’m sure, than a possible nuclear war with Russia or lung cancer.

For a few seconds on that Halloween evening, I truly was afraid. I couldn’t help it. It was a natural reaction not only to that boy’s hulking presence, but also to the abrupt juxtaposition of pretense and reality. On Halloween, we’re supposed to pretend to scare and pretend to be scared. But when the real thing appears in its place, it can really jolt you.

This juxtaposition is represented best by a simple anecdote. When my son was seven, he and his friends saw Star Wars for the first time. At a neighborhood gathering days later, the kids were chattering about Darth Vader, whom they kept referring to as “the big black guy.” The parents found this amusing, but quickly told the children not to refer to Darth Vader in that manner. The kids complied, of course, but asked why. After all, Darth Vader is big and he is black — as was my lone visitor on that memorable Halloween evening.

The parents laughed nervously, but they didn’t answer. They were too afraid.

And it wasn’t even Halloween.