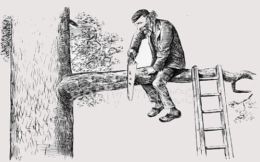 A terrible signal.
Too weak to even recognize.
— Talking Heads, “The Overload”

The social democratic welfare state, founded on the myth of progress, will collapse just as surely as, but with a much louder crash than the Communist system. — Guillaume Faye, Convergence of Catastrophes

We have all seen the famous visual gag, in comic books or silent movies, in which we see a man up a tree astride a heavy bough. He is energetically sawing away at the branch, but is sitting on the wrong side of the cut. It’s all good fun and schadenfreude until you change the situation slightly and you, the observer, are no longer watching amused from a distance, but have somehow been duct-taped to a kitchen chair right underneath the sawyer and the weighty, creaking branch. Not quite so funny.

That is where we are with the globalist Left: them up the tree, us in the chair. It puts me in mind of an English nursery rhyme I used to hear as a very small boy, when left and right was still something I had printed on my shoes or mittens:

What we mean politically by “the Right” and “the Left” in these strange and largely deluded times is a tale for another day, but I will use the terms here as what Jonathan Bowden called “intellectual shorthand.” They are heuristic terms which at least give us some guidance. We know roughly where we are, like a boy scout in a forest with a wobbly little compass and a smudged and frayed orienteering map. When I was a teenager in England, many ordinary people asked in the street would not really have known if they were Left-wing or Right-wing. They might have said they were Conservative or Labour, but that would be mere tribalism, like supporting your favorite football team. They would not have thought through the minutiae.

Now, it is somewhat different. There has been a good deal of political polarization and realization in my lifetime, and a certain amount of awareness has come along with it, largely due to the combination of the Internet and the resultant dissident journalism. The old-school media have even had to adjust to this now that their monopoly on opinionated editorial has gone, although that is their fault for letting insurrectionists like us in.

Politically speaking, this enlightenment may mean more division, but division is a good thing if it awakens the owl of Minerva and ordinary people begin to understand why they are divided, that division was necessary for a slightly grander scheme, one happening on the floors far above them. Despite this gradual dawning of awareness, however, we recall that the owl of Minerva flies at dusk. How much of the branch has our man already sawn through? How late is it?

To understand the polarity of Left and Right, we may also need better, retooled terminology (traditionally the Left’s grail) but essentially you know, or you should know, whether you are a creature of the political Left or the Right. To use a favorite term of progressive academics (and even that hair-gelled clown Gavin Newsom, Governor of California, who has started using it), we know who we are by “othering.” Do I believe — and have I thought it through — that anything the Left think is good actually is good? Nothing leaps to mind. Therefore, the Left are the “other” and I am a creature of the Right.

So we know that we are of the Right but we know it dialectically. We are adherents of the Right because we have seen the Left and we know instinctively as well as rationally that we are definitely not of that camp. We have therefore fled and encamped in the only other political space available. We know the tenets of conservatism, and view them as positives. We have also watched the predilections — and accompanying legislation — of the Left go essentially unchallenged this century, and we view these as negatives. Why, then, are we losing so dramatically? Why are we strapped to the chair beneath the sagging bough of the tree, there possibly just to break the fall of the maniac with the saw above us? Why is the overload inevitable, and why will we and our families suffer?

Partly, I think, because the Left have solidarity where the Right do not. It may be born out of fear rather than something more honorable, but lockstep marching has been achieved among our enemies. Watch how the Left deal with those who fall out of step. It used to be a sharp word or two on social media. Now, increasingly, it is professional suffocation. Uniformity of thought and opinion is both a mission statement of the Left and a book of the law.

Where the Left have solidarity and move in unison, like those schools of fish that all turn at the same time, the Right have no such thing. In what sense is there “a political Right”? It doesn’t really exist. The Right is a sectarian food-fight, a segregated canteen with different tables scowling at the others, postcode gangs carrying books instead of knives. I am undeniably Right-wing, but I get a lot of this on various sites: You can’t be Right-wing because you said something approving of a black man; you think trans people sometimes do need help; you don’t hate Jews as much as I do. You see it flung all over the landscape of the political Right like a mad woman’s excrement. And the longer this bitch-fight goes on, the closer we get to the overload. The branch won’t take too much more of the saw.

It seems that there is something coming, in the wonderful American phrase, down the pike — not a singular, world-changing event such as 9/11 or the Second World War; more like Guillaume Faye’s “convergence of catastrophes” whereby several different, though interlinked, disasters coincide with ruinous effect. From Faye’s book Convergence of Catastrophes: “A series of ‘dramatic lines’ are approaching one another and converging like a river’s tributaries with perfect accord (between 2010 and 2020) towards a breaking point and a descent into chaos.”

Written at the beginning of this century — already shaping up to be more dangerous than the last –this has the air of the Sibyl about it. All the elements are in place. Western economies are now showing the inevitable inflation caused by “quantitative easing,” aka printing money. There is an energy and a wheat supply problem due to the war in Ukraine, not to mention the dangerous possibilities of the war itself. America may not actually be in its second civil war, but it is doing an excellent impression of it. China is watching Taiwan like a heron watching a fish, waiting for the exact moment to strike. Governments have worked out how to implement the latest phase of societal wealth transfer in the form of green taxes and targets. Immigrants pour into the richest Western nations, making those countries poorer despite the protestations of globalists that this drain on financial and social capital is somehow essential. The revised list of converging catastrophes is not a short one.

The Western political complex has already pre-empted the potential of rebellion — both in thought and deed — by adopting a sort of caring, green authoritarianism as a harlequin’s coat, motley and the coat of the fool, as though they are guardians of a happy global village rigorously policed: Trudeau in Canada with the truckers, and the Dutch farmers. These are peasants’ revolts which the respective governments are keen to put down, and their globalist masters share their anxiety lest these protests spread. Nothing is more dangerous than powerful people who tell you that what they are doing is for the cause of something morally correct, appealing to ethical fortitude, and presenting it as the cross and banner of being on the right side of history. Grandstanding arias of climate change, or democracy, or trans rights, or any of the other absurdities with which Western leaders cloak their malevolence are essentially saying exactly the same thing to ordinary people. This is going to hurt, but it is good for you, as in the apocryphal army memorandum to commanding officers concerning their troops: Beatings will continue until morale improves.

But as I trawl the media, which I do every day, it is not just the broad-brush picture of Faye’s convergence theory that troubles me as regards the West’s immediate future, but the smaller incidents, the metapolitical bullying, and the encroaching use and consolidation of power in ever-decreasing, more “capillary” ways that point towards an overload. To return to our hapless man in the tree, the branch won’t break clean and fall. Instead, small cracks and fissures will multiply and extend until the terrible crash occurs. It will creak first, a terrible signal, too weak to even recognize.

Here is a grab-bag — a small selection from a cornucopia — of fissures and cracks, all of which will combine to produce the collapse, the falling bough, the overload:

I know I needn’t go on, although if I felt you had a spare day or two I could. You are just as cognizant as I am of the undeniable fact that planet Earth may not be hurtling towards the precipice, but it is making steady, confident progress in that direction. All these little dots are beginning to join themselves, and the bough bends further still as the insane sawing continues above us.

Why the globalists, the elites, the political class, the Davos/World Economic Forum crowd, call them what you like — call them the Illuminati, if it makes you feel any better — are so intent on changing the entire globe into a malevolent Disneyworld is beyond me. I hold to my opinion that, once you are godless, games become more fun the bigger and more dangerous they are. George Soros will be dead soon, and I doubt he believes in an afterlife. He just wants to play the biggest game of checkers before he becomes dirt in the ground.

So the question remains: If the overload comes and the bough breaks and the cradle falls, will this have been intentional or a case of technocracy trying to ride various tigers at once and failing? Personally, I believe that the Great Reset is already here and not far from completion. They’ve gone full Bezmenov/Sam T. Francis. Never go full Bezmenov/Sam T. Francis. The World Economic Forum’s version is a Punch-and-Judy show, an off-Broadway production of the real thing, with entertaining, silly glove-puppets like Klaus Schwab to distract the media while the real action goes on out of sight.

Once again — as we must, like weary travelers — we return to Orwell, and his comment about England in “The Lion and the Unicorn,” that “England is a family with the wrong members in control.” Forget England; make that the world. The Left run the farm now, and we just have to hope there is a barn to hide in when the floods and locusts and droughts hit, as it seems they inevitably must. And, like the desperately-bound hero in an action movie, we might try getting rid of that duct tape, or even trying to inch the chair below out of the way.

Or we may have to take the hit.

The overload may well be necessary. The question is, can we survive it?