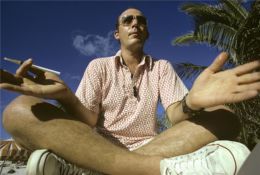 5. Gonzo is the Secret: The Power of Positive Gonzo

Constant Readers will know that I love to find me some traces of Neville in any iconic figure, and sure enough, it turns out there’s plenty of it here. For indeed, when Thompson decided to become a writer — that is, to make himself a writer — he chose a method paralleling Neville’s own simple method for changing the future”:[1] [5]

Among all the stories of Thompson’s life, one of the most famous is that he would type out pages Fitzgerald and Hemingway — something he began in high school. “I just like to get the feel of how it is to write those works…”[2] [6]

Dedicated, if not in fact obsessive, Thompson knew even this had to be supplemented:

According to Rory Patrick Feehan, Thompson’s obsession with image and persona convinced him that being a great writer was about more than just writing: “It was important to Thompson to look the part, but not just on a surface level; to be a writer, he felt he had to become a writerly persona, so the persona was part of his own creative process more than it was an attempt to project the same image to everyone else.”

You can buy James O’Meara’s book The Eldritch Evola here. [8]

He grew out his beard in an impersonation of Ernest Hemingway, whose picture he had hanging over his desk, and took countless self-portraits to document the starving artist at work. Living in a cabin in the woods was perfect as it further built his legend. He was not just living the typical life of a young reporter; he was, he felt, a real writer.

You’ll note that I’ve emphasized the word “feel” in these passages, for this is the key element in Neville’s method; as he always hinted, “Feeling is the secret.”

Moreover, the Gonzo method itself involved plunging into the story itself:

Even when looking elsewhere, he consciously embodied the things he was writing about in order to better examine them. Gonzo was a one-man genre largely because it always involved, to some extent, Hunter S. Thompson.

Consider how the fictional Raoul Duke prepares for Las Vegas:

“But first we need the car. And after that, the cocaine. And then the tape recorder, for special music, and some Acapulco shirts.” The only way to prepare for a trip like this, I felt, was to dress up like human peacocks and get crazy, then screech off across the desert and cover the story. Never lose sight of the primary responsibility.

Consequently, a typical Gonzo trope is Thompson revealing that “he has become the things that he was studying all along”;[3] [9] and in the same way Wills frequently observes that Thompson became “trapped in his Gonzo persona.”[4] [10]

Referring to Thompson winding up in that cabin in the first place due to the failure of his arrogant letters to potential employers, Wills speculates that “Perhaps on some level, Thompson willed this to happen.” Perhaps the same could be said of his entire career.

If true to any extent, it illustrates the subtle dangers of dabbling in “making changes in conformity to the will,” as Crowley defined magick. Thompson wanted to become a great writer, like Fitzgerald or Hemingway, but actually became, not a great but conventional novelist, but rather the inventor of a wholly new genre of his own, which he was unable to escape.

Overall he remained positive. “I just happen to think I’m going to make it,” he said. “I couldn’t afford to think otherwise.”[5] [11]

Another oddity occurs in an article that tries to make the rather “woke” point that his hometown of Louisville, while no longer segregated, is still “systematically racist,” as we would say today. He tells the story a “Negro executive with adequate funds” who meets with a realtor; the latter “is furious because the black man had sounded white [sic] over the phone.” By now we know Thompson likely made the whole thing up, but what’s interesting is that Neville tells a similar story to illustrate how a black man used Neville’s method to overcome his racial handicap and become a successful real estate developer.[6] [12]

If I may add a couple of small points: Thompson frequently quoted an idea he attributed to Faulkner — “seeing the world in a grain of sand” — which was actually, of course, Blake’s “To see a World in a Grain of Sand”; Blake ‘s Complete Works was one of Neville’s favorite authors, second only to the Bible.

Finally, I must note that one of the editors who worked on Thompson’s landmark Gonzo article, “The Kentucky Derby is Decadent and Depraved,” was one Donald Goddard.

[1] [14] Mitch Horowitz provides a handy precis: “First, clarify a sincere and deeply felt desire. Second, enter a state of relaxed immobility, bordering on sleep. Third, enact a mental scene that contains the assumption and feeling of your wish fulfilled. Run the little drama over and over in your mind until you experience a sense of fulfillment. Then resume your life. Evidence of your achievement will unfold at the right moment in your outer experience.” As I’ve noted before, this is exactly the method that Evola espoused in his magickal writings. See my review [15] of his The Miracle Club: How Thoughts Become Reality (Rochester, Vt.: Inner Traditions, 2018).

[2] [16] Apparently not as eccentric as might sound [17]: “US artist retypes Amis’s Lucky Jim verbatim; Tim Youd is copying out Kingsley Amis’s classic of academic life on the same typewriter it was written on, at the University of Leicester campus that inspired it — the 32nd novel he has recreated.” Youd says that “At its heart, the performance is a devotional exercise. It is an extreme, perhaps slightly absurd dedication to the author’s words.”

[3] [18] This first happens in Hell’s Angels, where Thompson becomes a sort of biker and eventually the victim of an Angels beating, and most famously at the end of “The Kentucky Derby is Decadent and Depraved” where Thompson recognizes his own face in Steadman’s surrealistic drawing of a crazy, drunken Kentuckian: “His hands were shaking so badly that he had trouble holding the paper, and my vision was so blurred that I could barely see what he’d drawn. ‘Shit,’ I said. ‘We both look worse than anything you’ve drawn here.’ He smiled. ‘You know — I’ve been thinking about that,’ he said. ‘We came down here to see this teddible [sic] scene: people all pissed out of their minds and vomiting on themselves and all that . . . and now, you know what? It’s us . . .’” I admit to having imitated the trope at the end of my own review of They Live [19], reprinted in The Eldritch Evola, op. cit.

[4] [20] About a dozen times, according to my Kindle. In “Doomed Love at the Taco Stand,” Thompson relates how a woman he rescues from a pack of vicious dogs reveals to him that the reason “you have problems” is that he has “the soul of a teenage girl in the body of an elderly dope fiend,” an oddly contemporary problem which delighted Thompson enough to have him repeat it several times in later writings; even more oddly, it seems that for once the woman really existed and really said it, unlike Thompson’s menagerie of phony characters and fake quotes.

[5] [21] “Whether you think you can, or think you can’t, you’re right.” — Henry Ford. Thompson’s “I couldn’t afford” sounded familiar, and a search revealed the 1995 book You Can’t Afford the Luxury of a Negative Thought by Peter McWilliams; for some reason, Amazon then suggested I “might like” Fitzgerald’s The Beautiful and the Damned, one of Thompson’s favorite books and as we saw above, a key work influencing Gonzo.

[6] [22] “And here is a story that will interest all of you; he said ‘I had some property to dispose of, I had certain things in investments for those who had money, and so I advertised it and a man called me on the wire. He saw the ad, and asked me if I was the gentlemen, so I told him I was the one who had the property. The first thing he said to me, “I don’t want any nigger property.” Jimmie said, “I didn’t answer, as if I hadn’t even heard the word. If he wants to be prejudiced, he may be prejudiced, that’s his right. He wants to be silly about it, that’s his right. He can spend; he need not invest. [The point of the story here is to invest one’s attention rather than merely spend it, just as Schopenhauer also advises.] So I said, “It is perfectly all right, sir, I have all kinds of property, I have all kinds of things for your investment.” A week later he called me up and said, “Would you come and see me.” He said, “I went to see him. When I got out of my car his knees almost buckled, for he didn’t know a negro was coming to see him, and a negro walked up his stairs into his living room.” He said within a matter of minutes he purchased $37,000 worth of mine that I had to offer. He said the first $25,000 that he bought he simply bought that to buy back his face, and then the remaining $12,000 he bought that because it was a very good investment. Well, since that time this gentleman has spent tens of thousands of dollars with me and constantly calls me to thank me because they are such wonderful investments.”’” — “Live in the End [23],” July 19, 1968. Thompson’s article appeared in 1963. I discuss this story in the light of Evola’s concept of the “race of the spirit” and modern bioengineering in “Look out honey, ’cause I’m using technology! Eumaios, Evola, & Neville on Race [24].”